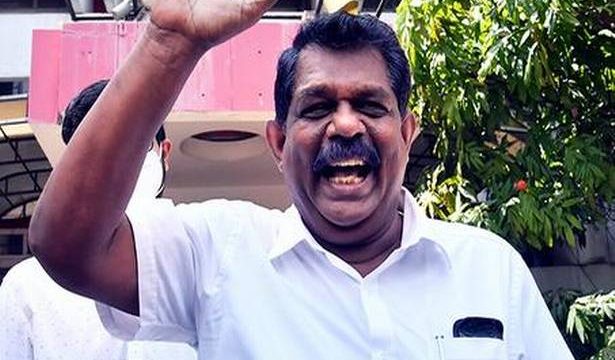 Congress’ sitting MLA V. S. Sivakumar’s hopes of scoring a hat-trick in Thiruvananthapuram have been dashed, with LDF candidate Antony Raju of the Janadhipathya Kerala Congress emerging victorious in the urban Assembly segment.

Mr. Raju, who had finished second behind Mr. Sivakumar in the 2016 elections, took his revenge by defeating the latter by a margin of 7,089 votes. Mr. Raju claimed 48,748 votes, and Mr. Sivakumar 41,659. The BJP candidate, actor Krishnakumar G., put up a valiant fight, but had to settle for the third spot with 34,996 votes.

Mr. Sivakumar said in a Facebook message that he accepted the verdict with humility. Mr. Raju expressed his heartfelt gratitude to the electorate and sought their continued support.

A former Health Minister, Mr. Sivakumar represented the segment in 2011 and 2016. Looking for a third term, he had banked on his development initiatives and strong personal connections in the segment to see him through. Capital city development, in fact, had featured high on the list of promises of all the three candidates.

The pro-LDF wave in the State and his success in wooing the coastal voters have benefited Mr. Raju, who had represented the erstwhile Thiruvananthapuram West constituency during 1996-2001.

On his part, Mr. Krishnakumar had succeeded in giving a three-cornered dimension to the battle. His tally is slightly higher than the 34,764 votes secured by cricketer S. Sreesanth, whom the BJP had fielded in the segment in 2016.