A tribal woman in labour pain and being carried on a makeshift ‘dholi’ down hill to a hospital due to lack of road connectivity delivered a baby girl on a slushy road in a forest area of Andhra Pradesh. 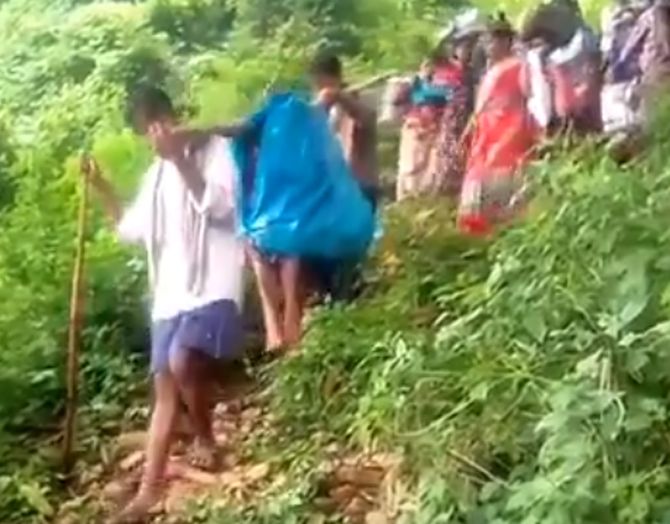 A video of the woman’s trek for about 3-4 kms from one of the ten hamlets on a hilltop in Salur mandal in Parvatipuram tribal belt of Vizianagaram district on Thursday has been posted on social media by a youth, who wanted to highlight the issue of lack of road connectivity faced by the villagers.

On coming to know that the woman was being carried in the traditional ‘dholi’ (a palanquin made using a cloth tied to a bamboo pole) to the hospital in Salur, the Integrated Tribal Development Agency authorities in the plains sent a medical team but she gave birth to the girl baby midway late Thursday.

“By the time our staff reached, the woman delivered a baby girl with the help of women accompanying her. Our medical team provided necessary post-natal care. The woman and the new born baby are fine,” ITDA Project Officer G Lakshmisha said Friday.

The girl baby is the fifth child for the tribal woman.

“It’s only in recent years that these villagers started coming down to the plains for institutional deliveries. There is no road connectivity to these hilltop villages but we always send medical teams in advance when we know about such cases,” the official said.

In fact, the government has made available a palanquin for the villagers but they have not been using it “since it was heavy” and prefer the traditional dholi.

The government has sanctioned Rs 5.5 crore for providing road connectivity to these villages under the Centre’s connectivity scheme Pradhan Mantri Gram Sadak Yojana, but no contractor bid for the work because of the difficult terrain, sources said.

A youth shot the video of the trek of the pregnant woman on his mobile phone and posted it on social media, saying he wanted to highlight the misery suffered by people of the tribal villages.

The ITDA acknowledged the road connectivity problem and said it was taking steps to build the roads.

“Some road works are tendering stage, some in sanctioning stage. The process is on,” Lakshmisha said.