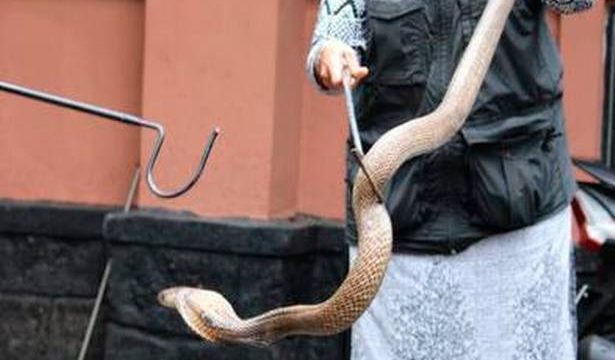 Don’t panic if you see a snake at your house or at a public place. Keep a safe distance from the reptile, click its picture on your smartphone, and upload it to SARPA, the Snake Awareness Rescue and Protection App. Help will reach you in no time.

Since January this year, the army of rescuers trained by the Kerala Forest Department have saved 2,606 snakes from across the State. From human habitations, mostly cobras were rescued in the past seven months, according to the data available with the department.

Though snakes could be seen at human habitations round the year, their presence is mostly noticed during monsoon and immediately after summer showers, says Sandeep Das, herpetologist. They may move out to safer places when their habitats are flooded during monsoon. The presence of these reptiles is also noticed when their eggs hatch, he said.

Though over 110 snake species have been recorded in the State, only around 40 are found in human habitations.

Common krait, cobra, Russell’s viper and saw-scaled viper are the deadly four that could inflict a lethal bite. Rare cases of spit viper bites have been recorded. No effective anti-venom is available for the species, said Mr. Das.

The department has so far trained 827 rescuers, including forest staff and volunteers. Malappuram has the highest number of snake rescuers, with 132 persons enlisted. Once the picture of the snake is uploaded, alert messages will be generated for the rescuers who will reach the spot by means of geo-tagging. The rescued snake would be released to its suitable habitat, said Mr. Anwar.

The app also has the contact number of hospitals where anti-venom is available and the navigation support for reaching the hospital.

The response time to a snake alarm call can range from 15 minutes to two hours depending on the availability of rescuers in a given locality.

The intervention of the rescuers has led to significant fall in the snakebite incidents, he said.