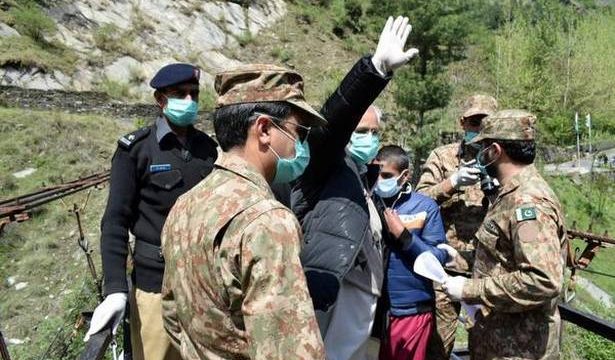 The Army handed over a boy to Pakistani authorities at the Titwal crossing point along the Line of Control (LoC) in Jammu and Kashmir’s Kupwara district on Wednesday, a defence spokesperson said here.

Mausam, the son of Manzoor Ahmad and a resident of the Lipa area in Pakistan-occupied Kashmir (PoK), was handed over to the Pakistani authorities at 11.50 a.m., he added.

"On the night of April 5, the youngster inadvertently crossed the LoC into Kupwara’s Karnah. He was identified as Mausam, son of Manzoor Ahmad from the Lipa area of PoK," the defence spokesperson said, adding that the Indian troops took due care of the boy and the Pakistani authorities were informed of his whereabouts.

Following an interaction between the authorities of both countries on the hotline, the Indian side handed over the boy to Pakistani officials at the Titwal crossing point as a humanitarian gesture, he said.

"The boy was presented with clothes and sweets. On the occasion of his repatriation, representatives of the Karnah civil administration were present," the spokesperson said. He said such instances of inadvertently straying across the LoC have been reported earlier also due to the proximity of villages along the LoC on either side.

"However, the Indian side has always been prompt in returning the individuals, keeping the humanitarian issue in mind," he added.

The Titwal crossing bridge located on the Kishanganga river has been acting as a point of peace between the two sides, the spokesperson said.

He said the site is visited by a number of people from either side and is emerging as a tourist spot, especially after the recently-agreed ceasefire between India and Pakistan.

"The peace and tranquillity as a result of the agreement is being appreciated by the civil population on either side of the LoC," the spokesperson added.