Further, farmer outfits separately announced plans to intensify their protests in the coming days. Apart from extending the pakka morchas in Patiala and Badal village till September 25, a rail roko protest has also been announced. 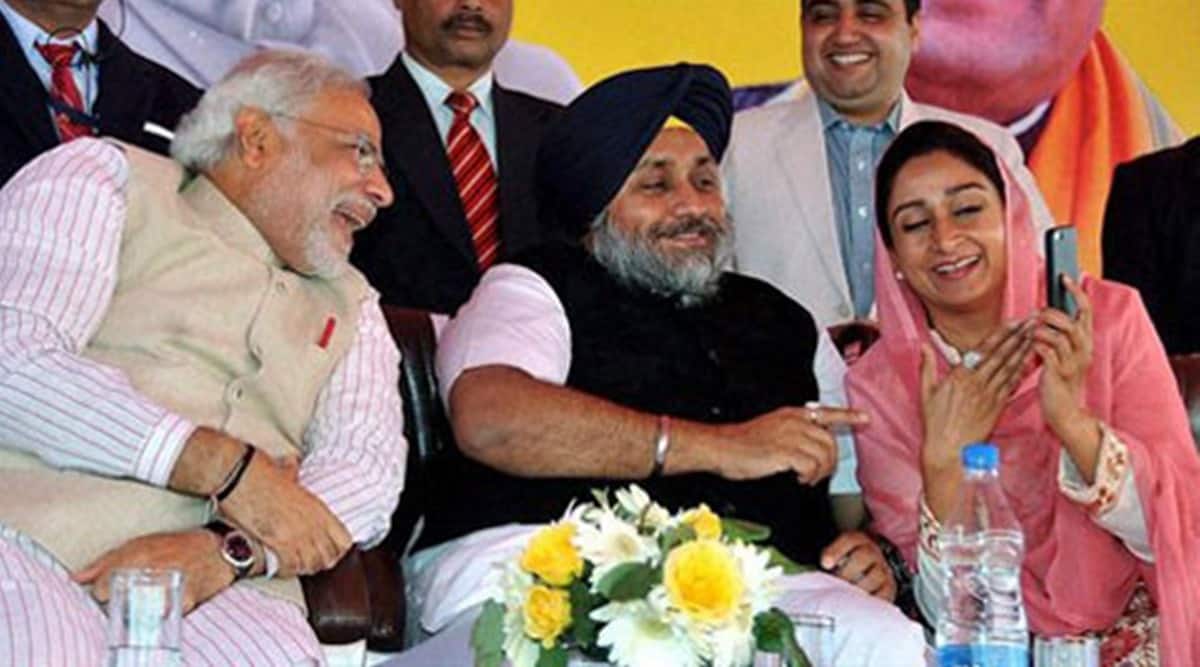 A day after SAD leader Harsimrat Kaur Badal resigned from the Union Cabinet, farmer outfits in Punjab dismissed her resignation as an attempt to protect Akali Dal rather than guarding interests of the farmers. They also said that SAD must snap its ties with the BJP and stand with farmers in protest against the farm bills.

Further, farmer outfits separately announced plans to intensify their protests in the coming days. Apart from extending the pakka morchas in Patiala and Badal village till September 25, a rail roko protest has also been announced.

A joint meeting of all farmer unions from the state has been called in Moga on Saturday by the Punjab unit of the All India Kisan Sangarsh Coordination Committee, which is a pan-Indian umbrella organisation comprising 250 farmer organisations. Sources said that a joint action plan could emerge from Saturday’s meeting.

Harsimrat Badal’s resignation, meanwhile, remained a hot topic of discussion among farmer outfits in the state, with most dismissing it as move to protect SAD fortunes.

Sukhdev Singh Kokri Kalan, general secretary of BKU (Ugrahan), which has organised the pakka morcha at Badal and Patiala’s PUDA ground since September 15, said, “What are Harsimrat and SAD trying to prove now? They were preaching to farmers about the benefits of ordinances till last week. But after they saw protests from farmers across the state, they realised that they will lose their base as a party in Punjab. So, this is is a political gimmick and that too when bills have been passed in the Lok Sabha. It is a stand not for farmers, but it is an effort to save Akali Dal’s existence so that their leaders could show their faces to the masses. However, they are still with the alliance and have just left the ministry. If any party is with the BJP, then they are supporting all the bills.”

Ajmer Singh Lakhowal, president of BKU(Lakhowal), said: Harsimrat’s resignation was to save their own skin and not for farmers, but still better late than never. They had judged that they will not be allowed to enter villages, hence this is a skin-saver. Same is being done by Amarinder Singh, who himself had attended so many meetings, and now he is protesting against the bills. Everyone just wants votes from farmers.”

Jagmohan Singh Patiala, working committee member of All India Kisan Sangrash Coordination Committee (AIKSCC) said: “Push the struggle ahead, that is the message. Resignation of Harsimrat only lends credence to the path of struggle to gain victory. We should take this message to the people so that their focus does not change.”

He added,”Harsimrat Kaur has resigned from the central government under pressure of peasantry’s anger on the bills relating to three agriculture ordinances and the movement of peasants against this. It is a pointer to the path of struggle which should be intensified by the peasantry for forcing the government to withdraw these acts.”

Protests to be intensified

The Kisan Mazdoor Sangharsh Committee, Punjab, has announced a ‘rail roko’ from September 24- 26 in Amritsar to protest against the farm bills. Meanwhile, the outfit behind the pakka morchas, BKU (Ugrahan), has announced that it will extend them for another five days.

Sukhdev Singh Kokri Kalan, general secretary of BKU (Ugrahan), revealed: “We have now extended our pakka morchas at Badal and Patiala till September 25. Earlier, they were till September 20 only. However, in protest of passing of farm bills, we will lodge our protest for more days outside the house of Badals and even at CM Amarinder’s hometown Patiala as both parties are opportunists.”

On Friday, 13 farmer outfits met on the call of BKU (Lakhowal) at Alamgir village in Ludhiana where they deliberated steps to intensify the protest. The outfit’s president, Ajmer Singh Lakhowal, said,” We will be part of Saturday’s meeting at Moga and will decide the next course of action.”

Jagmohan Singh Patiala, working committee member of All India Kisan Sangrash Coordination Committee (AIKSCC), said,”Already we have given a call for Punjab bandh on September 25 and now it is a Bharat Bandh call by AIKSCC, national unit. On Saturday, we have invited all farmer unions of Punjab at Moga so that we all can declare one joint programme as our issues are the same, but we all are making separate efforts. ”

Punjab Youth Congress has also planned a tractor march from Dera Bassi to Delhi along with farmers from across villages as a mark of protest against these bills.

PPCC president Sunil Jakhar said,”I will flag off this march and this will be our protest against draconian bills.”

On Thursday, AAP had also organised a tractor march from Talwandi Sabo to Badal village led by Leader of Opposition Harpal Singh Cheema.