While voting in Kerala, Tamil Nadu and Puducherry for their single-phase election will start and end on Tuesday, West Bengal is set for its third phase, and has five more phases to go. Assam, on the other hand, will witness the final of its three phases. 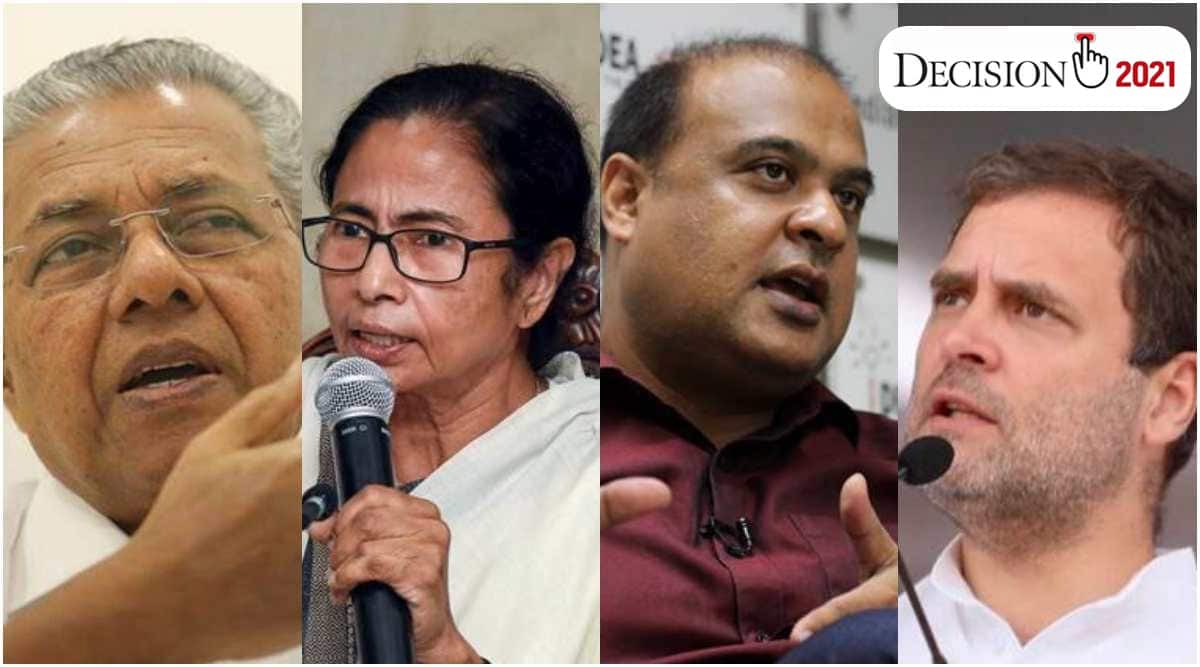 More than 750 constituencies spread across four states and one union territory will go to the polls on Tuesday, sealing the fate of the candidates who are locked in direct or triangular contests from their respective seats. While voting in Kerala, Tamil Nadu and Puducherry for their single-phase election will start and end on Tuesday, West Bengal is set for its third phase, and has five more phases to go. Assam, on the other hand, will witness the final of its three phases.

Kerala is all set to go to polls with 2.74 crore voters exercising their right to elect their representatives. As many as 957 candidates, including high-profile leaders and independents, are in the fray in 140 Assembly constituencies across the state. The total electorate in the state includes 1,32,83,724 male voters, 1,41,62,025 female voters and 290 transgenders, according to Election Commission figures.

The poll is also significant for Kerala Congress (M) chief Jose K Mani who recently quit his decades-long ties with the UDF and joined hands with the Left front. Congress leader Rahul Gandhi had personally camped in the state for several days to take part in dozens of corner meetings and rallies across the state to campaign for the UDF. However, the ruling LDF hopes to retain power for a second term, breaking the state’s four-decades-old trend of alternating between the UDF every five years.

The BJP-led NDA is leaving no stone unturned to drum up the maximum number of seats to become a decisive force in the state’s rule.

Assam is set for direct and triangular contests in 40 assembly constituencies that are going to polls in its final phase of elections on Tuesday to decide the fate of 337 candidates, including senior minister Himanta Biswa Sarma, his five cabinet colleagues and BJP state unit president Ranjeet Kumar Dass.

A direct contest between nominees of the BJP-led NDA and Congress-headed Grand Alliance is on the cards in 20 constituencies while there is a triangular fight in the remaining seats with the Assam Jatiya Parishad (AJP) being considered as the third force.

Polling will begin at 7 am and end at 6 pm, with the timing extended by an hour to ensure that COVID protocols are maintained in the constituencies spread across 12 districts.  The fate of 20 sitting MLAs – eight from the Congress, five from the BJP, three each from the All India United Democratic Front (AIUDF) and the BPF and one from the AGP –– will be decided in the final phase.

Himanta Biswa Sarma, the convenor of the North East Democratic Alliance (NEDA), the NDAs version in the region, is pitted against Congress candidate Romen Chandra Barthakur in a bid to retain the Jalukbari seat for the fifth consecutive term while the BJP state president Ranjeet Kumar Dass, who earlier
represented Sorbhog, will fight a triangular contest with the AJP’s working president Pabindra Deka and the Congress’ Santanu Sarma in Patacharkuchi.

More than 78.5 lakh voters will be eligible to exercise their franchise in Bengal, where BJP is seeking to dethrone the Trinamool Congress government and the Left Front-ISF-Congress alliance is hoping to make a mark. A total of 205 candidates are in fray, with the prominent among them being BJP leader Swapan Dasgupta, TMC minister Ashima Patra and CPI(M) leader Kanti Ganguly — in three districts — Howrah, Hooghly and South 24 Parganas.

Tight security arrangements have been made to ensure peaceful voting, with 618 companies of CAPF deputed to guard 10,871 polling stations, which have been marked “sensitive” by the Election Commission (EC). Bengal police forces will also be deputed at strategic locations.

The Diamond Harbour Lok Sabha constituency, held by Chief Minister Mamata Banerjee’s nephew and TMC MP Abhishek Banerjee, will be closely watched, as four of its seven assembly segments will go to polls in the third phase. The Indian Secular Front (ISF), started by Peerzada Abbas Siddiqui, has turned out to be a cause of concern for the TMC, as the outfit holds sway in several parts of South 24 Parganas and Hooghly districts.

The 16th Tamil Nadu legislative assembly election will be held in a single phase on April 6 (Tuesday) and the counting will take place on May 2 (Sunday). The polling will begin at 7 am and end at 7 pm. By-election to Kanyakumari Lok Sabha constituency will be held on the same day. The constituency fell vacant following the demise of Congress MP H Vasanthakumar.

Puducherry will also vote on Tuesday to elect a new government following the collapse of its Congress-led administration due to an array of resignations. It will witness a battle between the Congress party and the opposition led by a former chief minister N Rangasamy, who has allied with the BJP, the party accused of orchestrating the defection of ministers from the previous government by ‘purchasing’ and ‘threatening’ the Congress MLAs.