‘It is my duty to tell them about the brave soldiers who gave their lives for our land.’
‘The free air of freedom that we breathe is because of men like them.’ 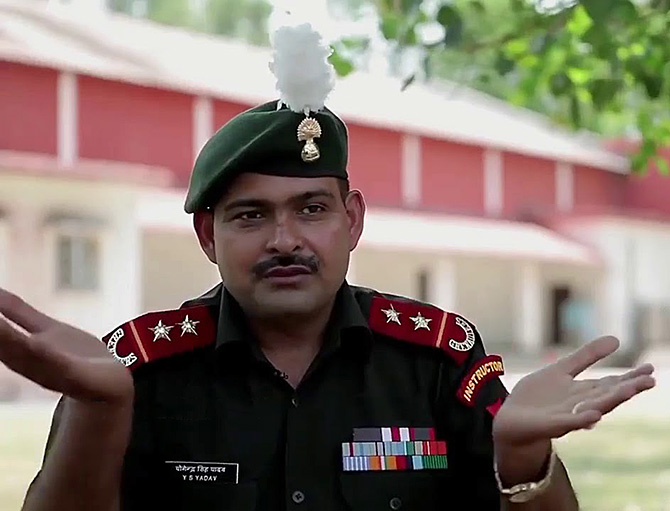 Subedar Major Yogendra Singh Yadav, Param Vir Chakra, is among India’s bravest of the brave who has featured in the Republic Day parade every year, for 20 years.

He is among the handful of living soldiers who have received the nation’s highest honour for gallantry in war or in peace.

Subedar Major Yadav was just 19 when he was awarded the Param Vir Charkra — he took 15 bullets fighting in the Kargil War — and is the youngest soldier to ever win the nation’s highest honour for gallantry. The Param Vir Chakra is ranked second after the Bharat Ratna in India’s official protocol.

When the jeeps carrying the three living Param Vir Chakra winners go past Rajpath at the beginning of the Republic Day parade, you can sense the respect and pride that their presence evokes. 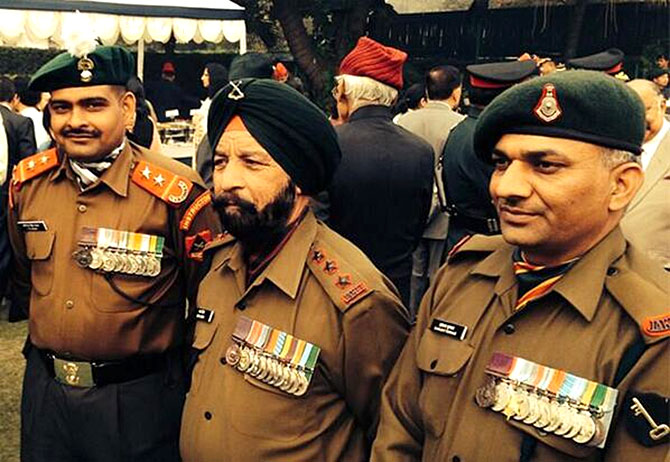 “It is an honour and privilege that I have been in the parade for 20 years. When our names are announced, I can see people’s eyes turn to our faces and then to our medals,” Subedar Major Yadav tells Rediff.com‘s Archana Masih.

“I see respect and affection for us warriors,” he says humbly and politely over the phone.

“This nation has great love and regard for the sainik (soldier). I feel I survived the war so that I could tell the men and women of my country about the bravery of the men who sacrificed their lives fighting alongside me.” 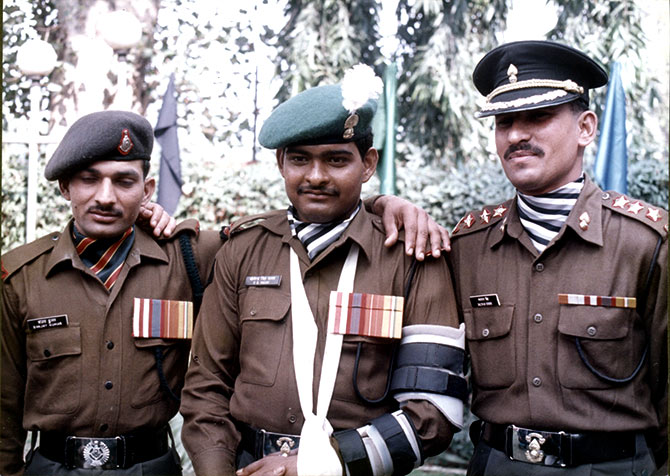 Subedar Major Yadav fought in two of the pivotal battles of the Kargil War — the battles of Tololing and Tiger Hill — which turned the tide of the war and brought victory for India.

The soldier was awarded the Param Vir Chakra for his exceptional and extraordinary bravery in the capture of Tiger Hill. His platoon scaled the heights for four days and launched a bitter attack against the Pakistani soldiers.

Indian soldiers paid in blood to secure the feature. Twenty-two highly trained men approached the Pakistan-occupied peak via a vertical cliff at an altitude of 16,500 feet.

His commander had divided the men into small sections — every soldier in his team of seven was killed in action. Then Sepoy Yogendra Yadav was the lone survivor from his team.

He was grievously injured and crawled his way down where the other men from his battalion were positioned. He gave a detailed account of that battle to Rediff in 2012.

“Every soldier has a role in a battle plan. He has to implicitly trust his commander and his men. What a soldier does is for his commander, his fellow soldiers, his country,” he says, relating snatches of what happened that day, an account he has told and retold many times.

“There is a legion of soldiers who have sacrificed their lives for their country. That day on Tiger Hill, I witnessed that myself — soldiers sacrificing their lives in the service of their country, without thinking about families or loved one they were leaving behind. It was an extraordinary example of selfless sacrifice and valour.”

He was evacuated for treatment and spent one-and-a-half years in hospital. Twenty years later, he says he is physically fine, but the arm occasionally swells up on lifting heavy things.

“The nature of life is one of constant struggle, but the Almighty has been kind and I am extremely fortunate.” 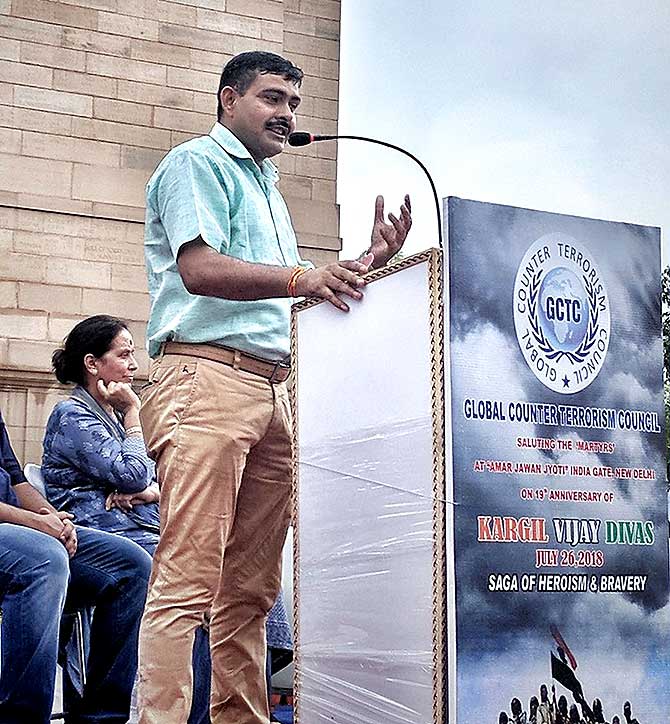 Every year he meets brothers-in-arms of the 18 Grenadiers and they share memories of lost friends. He meets the families of soldiers who did not return from the battlefront.

Last year, he met the daughter of his senior soldier Rajendra Yadav whose wife was three months pregnant when he was killed in action.

“She asked me, ‘uncle mere papa kaise the (tell me about my father)’, it is one question that I have found most heart wrenching to answer,” he says.

“I tell the children of my martyred friends that their fathers were India’s bravest sons. We owe our life and freedom to men like them.”

Subedar Major Yogendra Yadav is currently posted at an Indian Army training institute. He trains young jawans about aspects of soldiering and leadership in battle.

A role model, young jawans want to hear accounts of the valour of Tololing and Tiger Hill from him.

“It is my duty to tell them about the brave soldiers who gave their lives for our land. The free air of freedom that we breathe is because of men like them.”