Atal Bihari Vajpayee dead: Thousands are expected to turn out Friday when his mortal remains will be taken in a procession from the BJP headquarters on Deen Dayal Upadhyaya Marg to Smriti Sthal near Vijay Ghat in central Delhi.

Atal Bihari Vajpayee, the first non-Congress Prime Minister to complete a full term in office at the head of a coalition he stitched together with his moderate politics and charismatic appeal, died of multiple health complications at the All India Institute of Medical Sciences in New Delhi Thursday. He was 93.

A bachelor, Vajpayee is survived by his foster daughter Namita Bhattacharya.

He will be accorded a state funeral Friday afternoon and the final rites will be performed at the Smriti Sthal on the banks of the Yamuna in Delhi. The Ministry of Home Affairs said the national flag would be flown at half mast from Thursday for seven days across India.

“It is with profound grief that we inform about the sad demise of former Prime Minister of India, Shri Atal Bihari Vajpayee, at 05:05 pm,” Dr (Prof) Aarti Vij of AIIMS said in a statement. He had been in AIIMS since June 11.

Vij said Vajpayee’s condition was stable for the last nine weeks, but “unfortunately, his condition deteriorated over the last 36 hours and he was put on life support systems. Despite the best of efforts, we have lost him today. We join the nation in deeply mourning this great loss”.

From the AIIMS, his body was taken to his residence on Krishna Menon Marg in New Delhi for people to pay their last respects.

Leaders across the political divide mourned the passing away of Vajpayee, a Bharat Ratna, and many showed up in New Delhi from different parts of the country to pay their respects.

President Kovind said: “Atalji, the gentle giant, will be missed by one and all.” He said Vajpayee’s “leadership, foresight, maturity and eloquence put him in a league of his own”. Prime Minister Narendra Modi said he was “speechless… in a void” with a “welter of emotions” swirling at the passing away of Vajpayee.

India grieves the demise of our beloved Atal Ji. His passing away marks the end of an era… It was Atal Ji’s exemplary leadership that set the foundations for a strong, prosperous and inclusive India in the 21st century. His futuristic policies across various sectors touched the lives of each and every citizen of India,” Modi said.

READ | Why Vajpayee was indispensable for Jan Sangh, BJP

Former President Pranab Mukherjee, writing to Vajpayee’s foster daughter Namita, said: “A democrat to the core, Atalji dominated the Opposition space like a titan and led the government with aplomb. An inheritor and practitioner of the best traditions and qualities of leadership, in his demise the nation has lost a great son. An era that will forever be fondly remembered has passed away.” 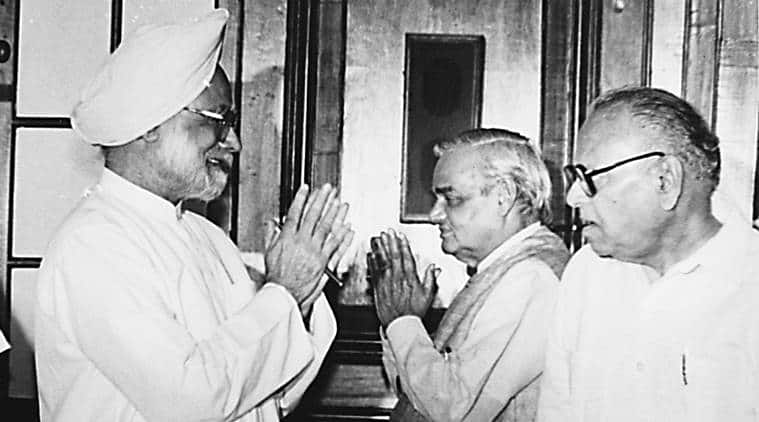 Hailing Vajpayee as “a towering figure in our national life” who “stood for democratic values and demonstrated this commitment in all his acts, whether as a parliamentarian, a cabinet minister, or prime minister of India”, UPA chairperson Sonia Gandhi said “he was a spell-binding orator, a leader of great vision, a patriot to the core for whom the national interest was paramount. But above all, he was a man with a very large heart and a real spirit of magnanimity”.

Thousands are expected to turn out Friday when his mortal remains will be taken in a procession from the BJP headquarters on Deen Dayal Upadhyaya Marg to Smriti Sthal near Vijay Ghat in central Delhi. A half-day holiday has been declared in all offices of the central government, central PSUs and Delhi government. Schools in Delhi will remain closed Friday.

The BJP has postponed the two-day meeting of its national executive which was to start Saturday. New dates will be decided later. BJP general secretary Kailash Vijayvargiya said: “For the party, there will be no programme or major activity for at least seven days.”

Vajpayee was an inclusive leader. He let colleagues do their job and critics speak up: Arun Shourie

Kerala island worries about floods destroying their link with the mainland