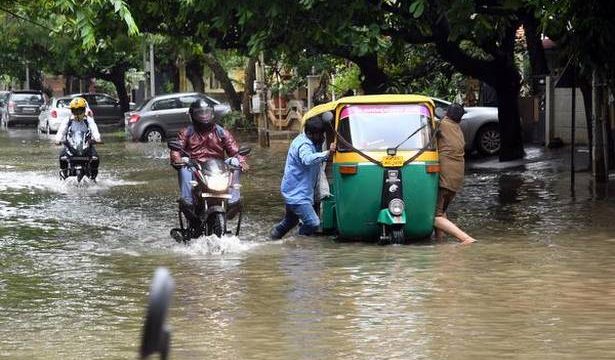 With efforts focussed on Kendriya Vihar, near Kogilu Cross, residents of other flooded areas were left fuming at having to fend for themselves.

Civic chief Gaurav Gupta said that October and November have been wettest in recent history. “We have managed with minimum disturbance and immediately responded to the crisis,” he said and added that Dasarahalli, Yelahanka, parts of Mahadevapura and northern parts of East Zone had been most affected following Sunday’s rains.

Septuagenarian Gowramma, resident of Venkataswamappa Layout near Vidyaranyapura, said she spent the whole night dealing with water that flooded her one-room home. Another resident claimed that even past noon, none of the authorities had visited the area.

A resident of Vidyaranyapura alleged that despite several calls to the various control rooms, no help was forthcoming from the authorities concerned.

Refuting these allegations, Dayananda, BBMP’s Special Commissioner (Admin) and zonal commissioner, said that civic officials had given attention to all affected areas, identified problem areas and worked with the local communities in providing immediate relief.

BBMP officials said they supplied essential items to lower income groups in Surabhi Layout in Yelahanka. According to Zonal Joint Commissioner Poornima, water logging had been reported from 42 different locations across Yelahanka zone.