Bengaluru Police investigators are piecing together an elaborate profile of the five Colombians who were arrested last week for committing at least five big-ticket burglaries in the homes of wealthy residents in the city’s south.

FOUR OF the five knew only Spanish, one was an MBA released from a Colombian jail after serving 16 years for his role in two murders, and all of them were experts in handling new-age tools such as GPS systems.

Bengaluru Police investigators are piecing together an elaborate profile of the five Colombians who were arrested last week for committing at least five big-ticket burglaries in the homes of wealthy residents in the city’s south.

The gang was nabbed by Bengaluru’s south division police after CCTV footage at some of the houses the gang burgled or attempted to — including the home of a former Karnataka chief secretary — provided a trail leading to its hideouts in the city.

According to police, the gang is alleged to have stolen property worth Rs 80 lakh between June and early July, mostly in the form of jewellery and expensive watches. They would melt the jewellery and create gold bars before attempting to sell the loot, said police.

Investigations have revealed that the Colombians got acquainted with each other at a restaurant in Mexico around five months ago, before they struck a plan to visit India on tourist visas to carry out burglaries. 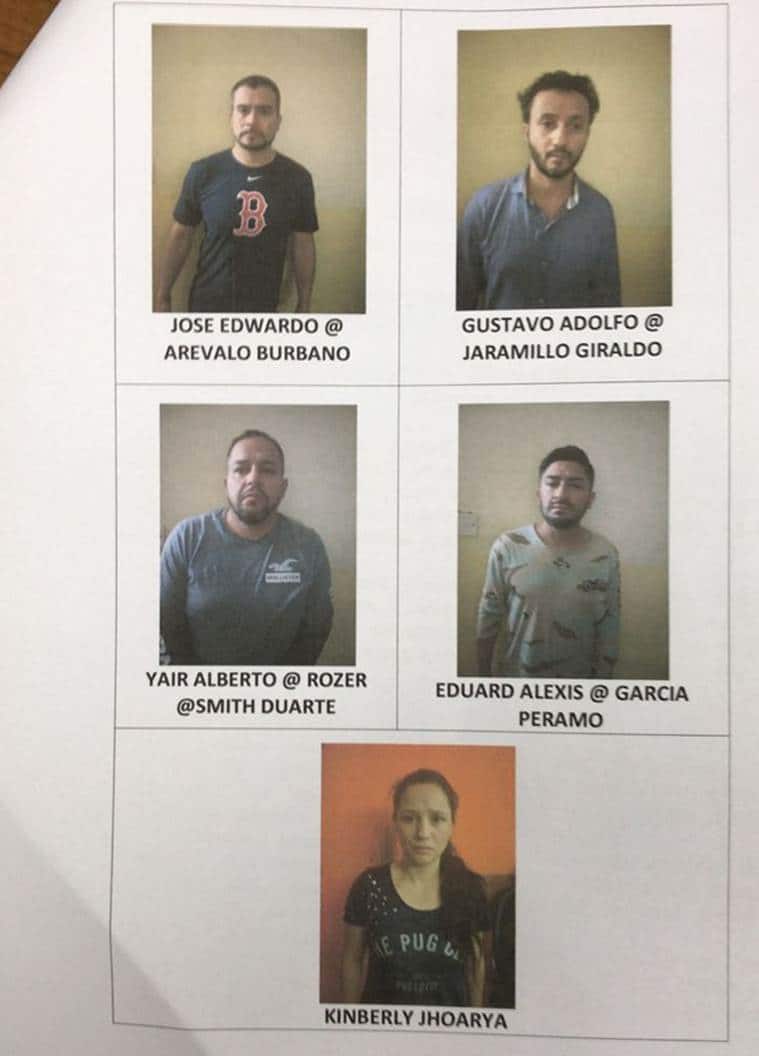 The plan was initiated on the basis of an “easy outing” that two of them — Jose Burbano and Gustavo Giraldo — had in Bengaluru in June 2016 when they carried out a robbery at the home of an MLA with two African associates and managed to return to Colombia. At the time, police said gold and jewellery worth Rs 40 lakh were stolen from the home of Venkatashiva Reddy, the former MLA from Srinivasapura in Kolar.

This time, sources said, the gang bought vehicles from a used-car sales firm, New Big Boys Car Showroom, and roamed residential localities trying to identify homes where residents were away by looking for lights and parked cars. They used GPS tools to later locate the homes they had marked and returned to carry out their burglaries using sophisticated tools.

According to investigators, Kimberly was sent to ring door bells to find out if anyone was inside, and alert the others over walkie-talkie if no one turned up to open the door — the gang had bought the walkie-talkie sets in Mexico.

The next step was for three men to commit the burglary while the woman, wearing head scarves and spectacles, stood guard outside the house while the fifth gang-member waited inside a car at a safe distance, sources said.

Investigations have shown that the gang bought three second-hand cars — two Chevrolet Beats and a Hyundai I20 — to carry out the burglaries. They would dispose each car on the e-commerce site Olx after using them for burglaries, including at the home of former chief secretary Kaushik Mukherjee.

Three of the gang members — Yair Sanchez, Eduardo Alexis and Kimberly — stayed at a fully furnished duplex villa in Bengaluru which they had rented from a UK resident through the international online accommodation booking service Airbnb. Jose Eduardo and Gustavo Giraldo arrived separately and checked into a service apartment in the city. The gang bought tools, clothing gear and SIM cards at local markets in Bengaluru, said sources.

Some of the other details pieced together by police include:

Jose Eduardo Arivalo Burbano, 40: The gang’s leader, he is a high-school dropout who owns a wholesale clothing store in Bogota. He is alleged to have visited Bengaluru in 2016 as well when he carried out a burglary at the home of an MLA along with a Colombian, and an African couple. He is reported to have spent five months in jail in Colombia for illegal possession of arms. He travelled to India from Mexico via Kathmandu and arrived in New Delhi on an e-visa in the third week of May.

Gustavo Adolpho Jaramillo Giraldo, 47: An MBA from Bogota, he served a 16-year jail term from 1996 to 2012 for his role in the murders of a policeman’s son and a woman who was studying foreign trade in a college. He is alleged to have travelled to Bengaluru in 2016 with Jose and was part of the four-member gang that targeted the MLA’s residence. He arrived in New Delhi with Eduardo from Kathmandu.

Yair Alberto Sanchez alias Rozer Smith Duarte, 45: The only English-speaking member of the gang, Sanchez lived in New York till high school. He is a welder by profession in Mexico but hails from Medellin in Colombia. He was charged with living illegally in the US in 2009, 2012 and 2015, and deported to Colombia. He has been found in possession of a fake American passport. He is also alleged to have purchased the walkie-talkies used by the gang in Bengaluru.

Eduardo Alexis Garcia Peramo, 38: A resident of Bogota, he is alleged to have been part of a Colombian gang that carried out a Rs 1.2-crore jewellery heist from Hotel Pride in Bengaluru in 2010 before escaping to Goa. While Eduardo managed to leave the country, four members of the gang were nabbed in Goa at the time. The others later escaped from Bengaluru by jumping bail. Eduardo is reported to have completed a food handling course, and was allegedly deported to Colombia from the US for being an illegal immigrant. He travelled to Mumbai from Germany with his girlfriend Kimberly and Sanchez on tourist visas before moving to Bengaluru in the first week of June.

Kimberly Guiterrez, 30: A former student of foreign trade, she is reported to hail from Cali in Colombia and is the girlfriend of Eduardo.