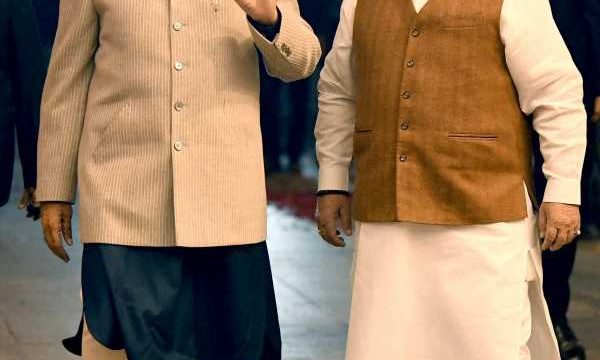 ‘Only time will tell how difficult it would be for the BJP when Mr Modi may not be in a position to actively run affairs of the party and be its biggest vote catcher.’
‘Then the BJP could even split.’

You can read Dr Vyas’s earlier interviews with Rediff.com here and here.

“The BJP remains heavily dependent on just one person for its electoral success,” Dr Vyas tells Prasanna D Zore/Rediff.com, adding, “A prime minister going to 53 constituencies and doing so many rallies is unheard of. (Doing) that actually made him a part-time prime minister, and a full-time election campaigner.”

Would you credit Narendra Modi for the BJP winning 156 seats in the assembly election in Gujarat?

I would, by and large, believe so, but not entirely that. But yes the results, if you look at it, are totally amazing.

Not even the BJP, in the best of their dreams, could have thought about such performance.

What worked for the BJP in 2022 that didn’t work for it in 2002? With Modi, then Gujarat chief minister, the BJP could only win 127 seats, its best electoral performance till Thursday in the state?

I don’t think it will be proper to analyse these dynamics so soon. I agree Mr Modi pitched in with hard labour.

A prime minister going to 53 constituencies and doing so many rallies is unheard of. (Doing) that actually made him a part-time prime minister, and a full-time election campaigner.

In a way, this is also not good for the BJP because despite this performance (of winning 150 plus seats), the BJP remains heavily dependent on just one person for its electoral success.

The day Mr Modi wears out — and I mean when he tires out because of age or health — then the BJP will face the same fate as that of the Congress’s journey from 149 (the Congress won 149 seats under Madhavsinh Solanki’s leadership in 1985) to less than 20 seats now.

So, one person, winning so many seats is indeed surprising, but nothing explains this kind of sweep for the BJP to my mind. Are you saying that the BJP is nothing in Gujarat without Modi’s charisma and popularity?

I would not say so as such because they claim to have a very well-oiled organisational mechanism.

But if you pride yourself so much about your organisational strength, then why would you discard the entire ministry in the run-up to the Gujarat assembly election?

Rupani’s (then chief minister Vijay Rupani) ministry was entirely sacked. And if you can discard the entire ministry and plant a new ministry, which is almost faceless and still have such a teamrolling performance, then there is no logic or sense for doing what the BJP’s central leadership did before campaigning began.

Did AAP play the spoilsport for the Congress’s abysmal performance?

It appears so at first appearance, but any definite analysis can be made only on the basis of micro as well as macro numbers that one would have to pour through coming from different regions and sub-regions of Gujarat. And these numbers will be available only after a couple of days.

But the primary impression suggests that AAP is responsible for the Congress’s poor performance in Gujarat.

Did the Congress miss out on being aggressive in its election campaign this time? There was no Sonia Gandhi, Rahul Gandhi or Priyanka Gandhi Vadra campaigning across Gujarat.

That’s a matter of style; success has many fathers. Of course, the BJP is an exception today.

If the Congress had succeeded, the media would have gone to town praising its novel election campaign which involved door-to-door, grassroots-connecting way of seeking votes.

But Priyanka’s sustained campaigning in Himachal Pradesh did help the Congress there.

Perhaps that’s how the Congress planned its strategy that they will not do a similar thing (having the Gandhis campaign aggressively in Gujarat). I would not know because I’m not a strategy planner for the Congress.

But it (silent campaigning) seems to have been a Congress strategy in Gujarat.

What special bond do the people of Gujarat share with Modi? He left the state in 2014 and eight long years later his charisma overwhelms Gujaratis…

That’s not the case. He keeps creating some or the other emotional issues. That is number one.

And number two, is he keeps creating, in a subtle manner, communal polarisation; he keeps the divisive Hindu-Muslim issue pot burning in Gujarat.

Communal polarisation is the BJP’s best friend in Gujarat.

Most Gujaratis still think that these people (the Muslims in Gujarat/India) should be driven out.

Gujaratis are Gujaratis. Except money they don’t take much interest in politics.

The BJP has succeeded so well in permanently etching two-or-three things (about Muslims) in the minds of Gujaratis that the BJP is reaping that dividend in Gujarat and may continue doing that for some more years. Is this the end of the road for the Congress in Gujarat?

I will never say that because one should not forget the BJP’s journey from just two Lok Sabha seats in 1985 to being the largest political party in India today.

No political party ends so fast. I think the Congress still has about 22-25 per cent share of popular vote (in Gujarat).

On the contrary, I see this as a sign of warning for the BJP.

Learning to repeatedly rely on just one individual could make things difficult for them. Only time will tell how much difficult it would be when Mr Modi wears out and may not be in a position to actively run the affairs of the party and be its biggest vote catcher.

Then the BJP could even split.

What lessons can one learn from the way the Aam Aadmi Party has performed in Gujarat?

According to me, AAP is no phenomenon. It is a passing fad. AAP will always act as a spoilsport.

Spoilsport for any party but the BJP?

I would say AAP would always play the spoilsport for any party but the ruling party.

One common trait that runs along AAP and BJP is both are individual-centric parties as they exist today.

Arvind Kejriwal is to AAP what Narendra Modi is to the BJP.

These individuals are everything and anything for their parties.

Will Bhupendra Patel get a full term as chief minister?

He will have very little role to play in Gujarat. How does it matter?