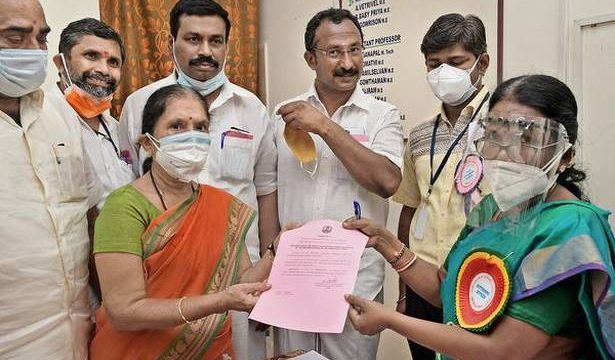 Of the total 1,81,857 valid votes, Ms. Saraswathi, who is a doctor by profession for 45 years, secured 78,125 votes while the Ms. Subbulakshmi secured 77,844 votes. Re-counting thrice of postal ballot papers delayed the declaration of results as finally the BJP bloomed in the district at the late hours of Sunday.

Ms. Subbulakshmi’s 44-year-old political career started with AIADMK in 1977 after which she joined DMK in 1980.

During the 2019 Parliamentary election, she declared that she would not be contesting the elections due to age factor, paving the way for new leaders. However, the party’s decision to field her as a candidate in the Assembly election did not go well with the party men and it was said that turned in favour of the BJP. While Ms. Saraswathi and the BJP functionaries along with AIADMK cadre canvassed for votes highlighting the welfare schemes brought for the women, Ms. Subbulakshmi failed to impress the electors during the campaign, say sources.

“Dissidents within the party and ineffective campaign led to her defeat,” said a DMK functionary, speaking on anonymity. The functionary said that DMK could have easily won the constituency if one of the aspirants who is known to the party men and the electors had been fielded. “The BJP utilised the opportunity to shine,” said a senior BJP functionary who credited the victory on the faith people had on the party.