Two people at the scene were treated for injuries after the vehicle crashed into the large steel barriers erected around the Houses of Parliament complex. 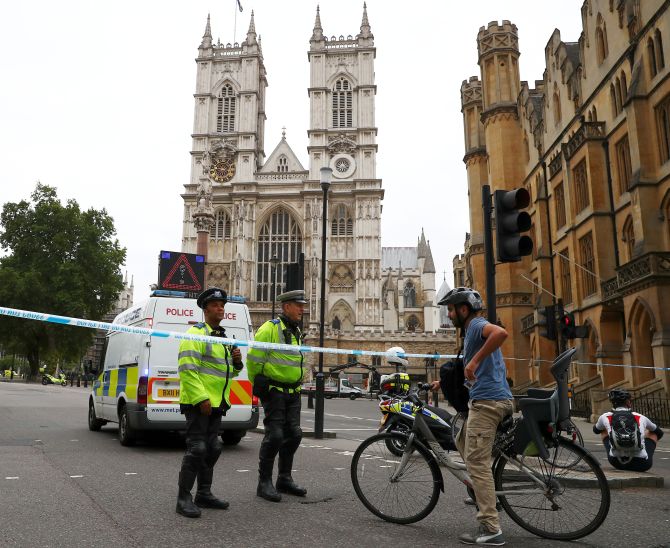 In a terror attack, a speeding car crashed into security barriers outside the United Kingdom’s Parliament during rush hour on Tuesday, injuring two persons, Scotland Yard said, as a man was arrested on suspicion of terrorism offences.

Scotland Yard’s Counter-Terrorism Command is treating the incident in central London as a terrorist attack.

The man, in his late 20s, has been arrested on suspicion of terrorism offences. Eyewitnesses said that the man, who looked calm, was led away in handcuffs from the car by officers after the crash.

The identity of the man was not immediately revealed.

“At this stage, we are treating this as a terrorist incident and the Met’s Counter Terrorism Command is now leading the investigation,” a Met Police spokesperson said.

The spokesperson said that there was nobody else in the vehicle, which remains at the scene and is being searched.

No weapons have been recovered at this stage.

Police have put up a Terrorism Act cordon, a reaction to incidents of this nature near any high-security hotspots in the city.

“At 0737 hrs (1207 IST) today, a car was in collision with barriers outside the Houses of Parliament,” the Met Police said.

The car was seen wedged into flap-style barriers that allows vehicles access to the House of Lords, giving the impression that the driver may have been trying to gain access to the Parliament building.

British Prime Minister Theresa May said: ‘My thoughts are with those injured in the incident in Westminster and my thanks to the emergency services for their immediate and courageous response.’

Mayor of London Sadiq Khan said he was in close contact with police. 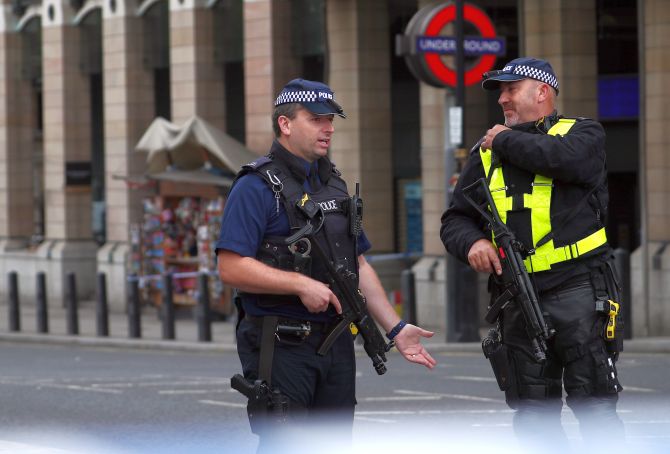 London Ambulance Service said in a statement that it had ‘treated two people at the scene for injuries that are not believed to be serious and have taken them to hospital’.

The area around Parliament Square has been cordoned off as investigations continue.

The incident occurred at peak rush hour, resulting in major travel disruptions as Westminster tube station was shut down and road closures put in place.

Streets around Millbank, Parliament Square and Victoria Tower Gardens have been cordoned off. 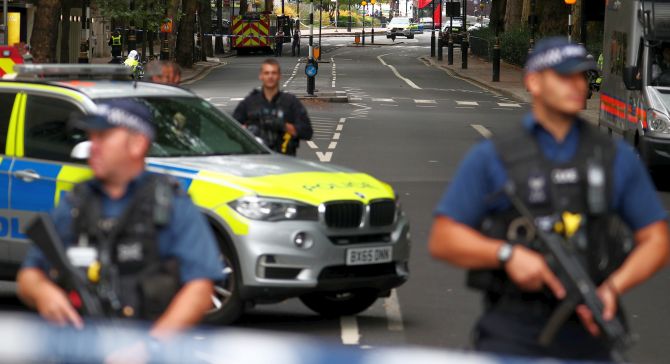 Heavy armed police presence could be seen in the area as the incident unfolded. Barry Williams, a BBC member of staff, said: “I heard lots of screams and turned round.”

“The car went onto the wrong side of the road to where cyclists were waiting at lights and ploughed into them. Then it swerved back across the road and accelerated as fast as possible and hit the barrier at full pelt.

“It was a small silver car and he hit it at such speed the car actually lifted off the ground and bounced,” Williams said.

Some eyewitnesses reported seeing smoke emanating from the hood of the car.

The Houses of Parliament are surrounded with security barriers of steel and concrete. Parliament is currently not sitting.

However, hundreds of workers and officials would have been within the complex, including construction crew involved in refurbishment work on the Palace of Westminster, which houses the iconic Big Ben.

Britain’s terror threat level remains at ‘severe’, which means an attack is highly likely, since a series of terrorist attacks last year.

The UK has been on high alert since the March 2017 attack near Parliament, which was followed by a suicide bombing at an Ariana Grande concert in Manchester in May, which claimed 23 lives.

In June last year, a group of three ISIS-inspired men rammed a vehicle into pedestrians in London Bridge area before going on a stabbing frenzy, killing eight people before being shot by armed officers.