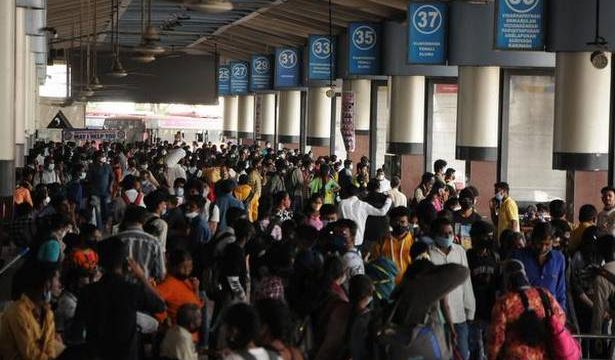 With holidays being declared for educational institutions and due to weekend, there was spike in number of passengers

The rush ahead of Sankranti festival at bus and railway stations was visible with tens of thousands of students, professionals, and families making a beeline to travel to their native places and other destinations within Telangana and Andhra Pradesh on Saturday.

As it was a weekend, the home-bound people came on to the roads around the same time after office hours, jamming thoroughfares for long hours. Traffic was chock-o-bloc from Moosapet to Miyapur which straddles many of the colonies where people of AP-origin reside.

The rush at bus stations was heavy, especially at the Mahatma Gandhi Bus Station (MGBS). In addition to the scheduled 4,600 buses across the city, another 600 buses were operated to ease the movement of large number of passengers on Saturday, a Telangana State Road Transport Corporation (TSRTC) official said. The number of buses is likely to increase till late in the night with passengers continuing to arrive at bus stations and other locations where buses can be boarded. Over a lakh passengers are estimated to have used the TSRTC’s buses till 8 p.m., sources said.

Bus stations were buzzing with activity. Towards late in the evening, other places such as KPHB, Uppal and Saifabad saw a heavy rush of passengers who were waiting to board buses.

Varaprasad, Regional Manager, Ranga Reddy Region, TSRTC, gave an insight into the rush. He said given Telangana government’s decision to declare holidays for educational institutions, the influx of student passengers at bus stations was noticeably heavier. Further, this being the second Saturday of the month, the number of passengers saw a significant spike. While the rush began on Friday, it increased a day later. This trend is expected to continue for the next few days.

“Apart from the 4,600 regular buses, we put into service another 600 additional buses on Saturday. On Friday, we operated 243 additional buses. The number of passengers has increased because of the holidays. We saw students carrying a lot of baggage given the long holidays. Of course, buses are at full occupancy. The TSRTC is fully prepared,” he said.

The Secunderabad Railway Station too witnessed similar scenes. Here too students were seen in large numbers waiting at platforms to board trains. While this was the case, given the COVID-19 pandemic and 2,606 cases being reported on Saturday, much was left to be desired in terms of following COVID-19 protocols, such as social distancing, at both bus stations and railway stations.