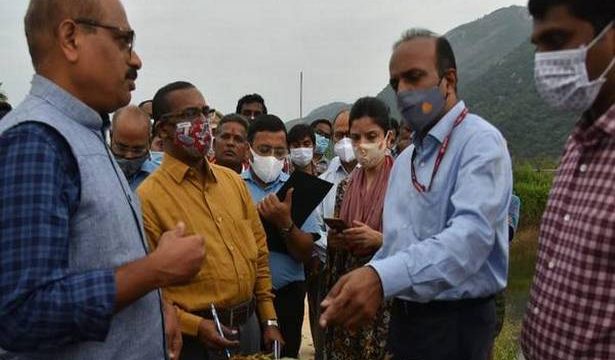 Ready-to-harvest crops have been destroyed in heavy rains, say farmers

The inter-Ministerial central team visited the flood-hit villages of Tirupati and Chandragiri constituencies in Chittoor district on Friday.

The team inspected the damaged paddy crop at Bhimavaram village, where the farmers gave vent to their grievances that 32 of the 180 families had suffered losses to the standing crop that was ready for harvest.

When the team went around the Bhima river area, the Collector informed the team that similar was the situation in Punganur area due to surge in water flow.

The members of the Central team walked up to Kuchivaripalle and could not reach the waterlogged Moolapalle.

Meanwhile, Mr. Hari Narayanan confirmed that the Rayalacheruvu was safe and the breached portion of the bund had been covered with sand bags.

Even as water was found leaking out from another spot, some 100 metres away from the point where a breach was developed, the officials and technical crew rushed to find out a solution.

Normalcy was restored in the mammoth tank after the outflow was increased to match the rising inflows, thus striking a balance.