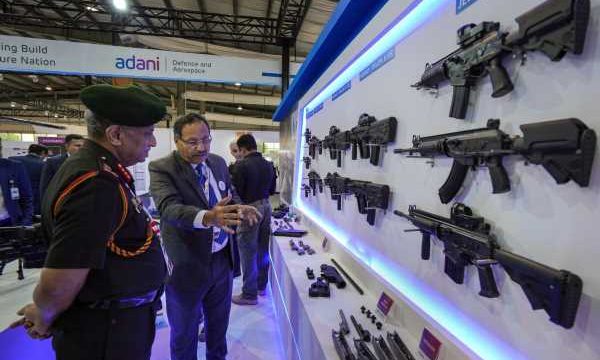 With the theme of ‘Aatmanirbhar Bharat’ (self-reliant India) underpinning India’s premier defence exposition — DefExpo 22 — attention is focused on the India Pavilion and the sprawling presentation of the Defence Research and Development Organisation (DRDO).

Prominent in the DRDO’s display are several artillery guns, armoured vehicles and tanks that underline a measure of success in developing these key weapons platforms for the army. Here are three systems that are headed for success.

There has long been attention on the 155 millimetre (mm), 52 calibre (cal) Advanced Towed Artillery Gun System (ATAGS), which the DRDO is developing in partnership with the Tata and Kalyani groups.

Now, without fanfare, the DRDO has produced an offshoot of the ATAGS — called the 155 mm/52 cal Mounted Gun System (MGS) — which could become a battle winner that is central to the army’s firepower menu.

The ATAGS is a conventional howitzer, which requires a wheeled tractor to tow it between firing positions. In the MGS, however, the entire gun is mounted onto a wheeled tractor, from where it can be fired without any dismounting or lengthy preparation.

The MGS weighs 15 tonnes and the Kolos Tatra tractor on which it is mounted weighs another 15 tonnes. The total weight of 30 tonnes can comfortably negotiate the 40-tonne bridges on most highways.

The MGS has a ready customer, since the Indian Army’s artillery plan stipulates the purchase of 814 MGSs to beef up artillery firepower.

The DRDO wants the army to acquire MGS under the high-priority Chapter IV of the Defence Acquisition Procedure of 2020. This chapter gives the highest priority to: ‘Procedure for acquisition of systems designed and developed by DRDO/DPSU/OFB’.

The DRDO’s MGS faces competition from firms such as Bharat Forge and Tata Aerospace and Defence (A&D), which have also developed their own MGS. Only if the defence ministry categorises this acquisition in the Chapter IV category would the field be clear for the DRDO’s version.

However, the DRDO is confident about the superiority of its MGS. It has successfully cleared tests in deserts and high-altitude areas, displaying high accuracy and consistency.

For when the enemy brings down counter fire, there is an armoured cabin (currently armour steel, to be developed into composite material) in which they can take shelter.

The Chinese encroachment across the Line of Actual Control into Indian-claimed territory in April 2020 galvanised the DRDO into resuming work on a much debated project: Development of a 25-tonne light tank that would be mobile enough for India’s high mountain border areas, for jungle terrain, and for areas with narrow roads and bridges.

While the DRDO completed its design work, the Directorate General of Armoured Corps (DGAC) finalised its Preliminary Staff Qualitative Requirements (PSQR), which detailed the precise specifications of the tank.

The DRDO was given the project in November 2021, with a deadline of three years. By November 2024, it is to finish trials and immediately begin delivery to the army.

The tank’s key component — the engine and transmission — are to be bought off-the-shelf. Under evaluation are engines from MTU of Germany, Caterpillar and Cummins of the US. Transmissions will be chosen from Renk of Germany and British firm Allison.

Protection is modular, with bolt-on, retrofittable armour providing protection of STANAG level 4 in the tank’s frontal 60-degree arc and STANAG 2 elsewhere. It will have a high-pressure tank gun (either 105 mm or 120 mm).

According to DRDO sources, this effort is named Project Zorawar, after the legendary Sikh general who took his armies deep into Tibet.

The DRDO has developed the WhaP as a basic platform for a family of mobile, protected multi-purpose vehicles, including a command post vehicle, a reconnaissance vehicle for a chemical, biological, radiological and nuclear (CBRN) battlefield, for amphibious reconnaissance, or even use as a light, armoured ambulance.

With a hydrogas suspension, and a 600 HP Cummins engine coupled to an Allison transmission, the WhaP is to be highly mobile.

Protection is to be modular, with bolt-on, retrofittable panels that provide cover up to a level of STANAG 4. The floor can be reinforced to resist an improvised explosive device.

Wish lists prepared for various United Nations missions have been recycled into the WhaP.

The primary armament is to be a 30 mm cannon, mounted on a gun turret with an upgraded sighting system, which is being developed by the DRDO in partnership with Bharat Electronics Ltd.