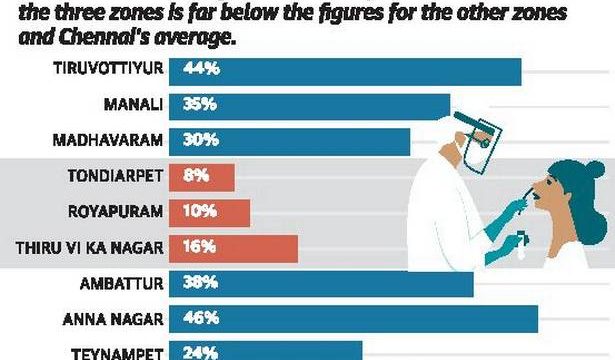 From a peak of over 7,500 cases a day in mid-May, the number of COVID-19 cases reported daily in Chennai has consistently and sharply declined to less than 2,000 now.

In the past two weeks, the average number of cases reported daily declined by 34% in the city. However, the decline was not uniform across all the zones. While a majority of them reported a sharp decline, Tondiarpet, Royapuram and Thiru Vi Ka Nagar saw only a marginal drop. As against the 34% decline in cases reported in the city, the cases in these three zones dropped by only 8%, 10% and 16%, respectively. In absolute figures, while the average number of cases reported daily in these three zones together was 485 during May 25 to 31, it dropped to 429 during June 1 to 7.

In contrast, in the Anna Nagar zone, the average number of cases reported daily reduced by nearly 50% to 168 last week from 309 the earlier week.

The three zones stood out even when cases per lakh population reported in the past two weeks were considered. (Refer to the second chart in the accompanying infographic).

It may be noted that the three zones were among the worst affected during the first wave, and have reported relatively fewer cases per lakh population during the second wave, when compared to other zones.

However, these thickly populated zones reported roughly the same number of cases over the past two weeks, indicating the need for greater focus on bringing down the numbers, particularly considering the lockdown relaxations that have now come into force.

Teynampet, Adyar, Valasaravakkam, Madhavaram and Kodambakkam were the other zones where the percentage of decline was lower than the city’s average.

Greater Chennai Corporation Commissioner Gagandeep Singh Bedi said that the city was not letting down its guard and was in fact ramping up its surveillance across the city, including in these three zones.

“Our tests have not come down and in fact have gone up to around 32,000 even when cases are declining. In addition to this, we have increased surveillance by asking private hospitals, scan centres and pharmacies to report on people with COVID-19 like symptoms,” he said.

He highlighted that the testing strategy of GCC was also very focussed with testing of primary contacts, and contacts from government offices and private hospitals who are likely to come in touch with more people.

Highlighting that test positivity was very low even in these three zones, he said that GCC was targeting vaccinations in some areas in these zones as well.