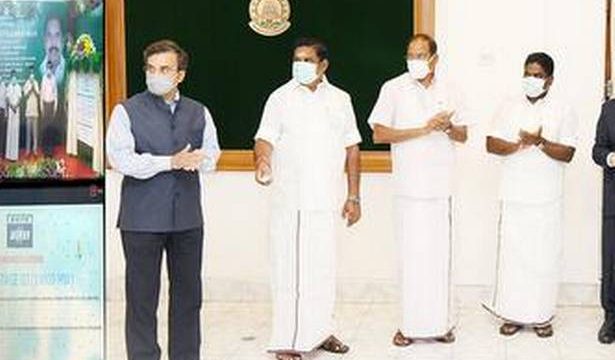 In a series of video conference events from the Secretariat, he launched these projects.

Mr. Palaniswami launched the boiler light up, a key step towards the commissioning of the 800 MW North Chennai Thermal Power Station Stage III, which is being set up at a cost of ₹6,376 crore at Athipattu, in Tiruvallur district.

“This project will be completed in August 2021 and will produce 19.2 million unit of power a day. Through this project, Tamil Nadu will get an additional power of 6,000 million units annually,” an official press release stated.

He unveiled the four-lane highway running across Dindigul and Tiruppur districts connecting Oddanchatram, Dharapuram and Avinasipalayam, laid at a cost of ₹713.45 crore.

He also inaugurated 26 bridges and two other roads built by the Highways Department at an investment of ₹362.19 crore.

The foundation stone for four road projects worth ₹1,115.66 crore and buildings and bridges worth ₹30.13 crore to be constructed in multiple locations for the Rural Development Department were also unveiled.

An employees’ pension scheme for those who retire from the primary agricultural cooperative credit societies (PACCS) was launched. The beneficiaries would be paid a monthly pension of ₹1,000 from the PACCS employees ex-gratia pension corpus.

A booklet in Tamil and English, highlighting the government’s achievements and also a compilation of select speeches of the Chief Minister, were released.