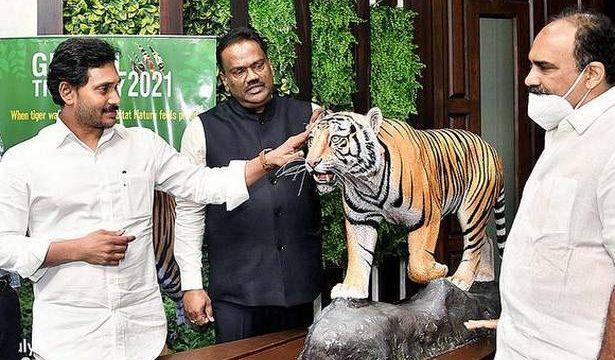 The book contains the photographs of 63 tigers that were found in the Nagarjunasagar Srisailam Tiger Reserve (NSTR) in the State.

Chief Minister Y. S, Jagan Mohan Reddy on July 29 released a coffee table book on tiger population in the State. He also released a poster on conservation of tigers, coinciding with International Tigers Day. The book contains the photographs of 63 tigers that were found in the Nagarjunasagar Srisailam Tiger Reserve (NSTR) in the State.

Officials of the Forest Department explained to the Chief Minister the steps being taken to conserve tigers in the State. There were 47 tigers as per tiger census in 2018. The officials found that the tiger population has increased to 67 when the tiger images have been captured in camera traps during 2020-21. The footprints of tigers were found from Nallamala to Seshachalam forests. There was evidence that tigers were moving in Kadapa and Chittoor districts, the officials said.

Mr. Jagan asked them to take steps to conserve the tigers effectively. The Chief Minister agreed to a proposal to buy vehicles for the officials and employees working in the tiger reserve.

Deported by US, Haitians are in shock: ‘I don’t know this country’

From TV to the French presidency? A right-wing star is inspired by Trump
India News