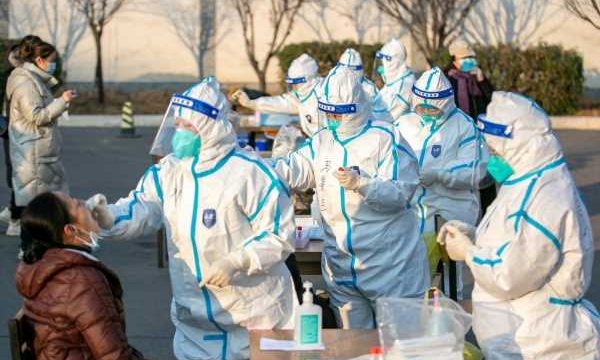 China’s Zero-COVID-19 case policy is increasingly coming under stress as the country is reporting a spike in the number of coronavirus infections from different provinces ahead of the Beijing Winter Olympic Games with over 2,500 people undergoing treatment.

China’s National Health Commission said on Thursday that 207 COVID-19 cases, including 156 new locally transmitted ones and 51 imported were reported on Wednesday.

It said 2,563 patients still receiving treatment, of whom 15 were in severe conditions.

These cases were in addition to 197 on Wednesday and 209 on Tuesday. These spike of cases were being reported amid growing concerns over the spread of the Omicron variant.

As of Wednesday, China’s official count of coronavirus cases since it was first reported in the central Chinese city of Wuhan in 2019 was 101,890 with 4,636 deaths.

China has controlled the contagion by drastically limiting international travel but sporadic clusters of cases continued to surface in different parts of the country, putting its ‘zero case’ policy under stress.

Chinese officials reported a case of Omicron on December 13 in Tianjin city followed by a few more cases. However, there is not much information about its spread in the country.

The health officials also reported an outbreak of Delta strain sub-lineage AY.4 in Zhejiang province in the middle of the month which was reportedly brought under control.

The rising number of cases ahead of New Year’s Eve is a cause of concern as China is poised to hold the 2022 Beijing Winter Olympics in a few weeks’ time.

The Beijing Winter Olympics, the 24th edition of the showpiece that started way back in 1924, will be held from February 4 to 20.