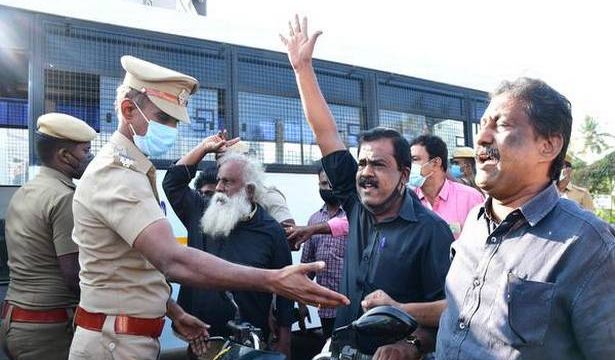 The Coimbatore City Police on Thursday detained around 30 members of various outfits, including the Thanthai Periyar Dravidar Kazhagam (TPDK), who staged a demonstration condemning the Rashtriya Swayamsevak Sangh (RSS) for having conducted a ‘shakha’ on the premises of a private school.

The police said the protesters, led by TPDK general secretary K. Ramakrishnan, gathered outside the school at around 8 a.m. He alleged that the conduct of this event by the RSS volunteers would cause unrest and fear among the public.

Personnel from Saravanampatti police station, who were deployed at the spot, began removing the protesters and boarding them in a police vehicle a few minutes after the demonstration commenced.

Mr. Ramakrishnan, who lay on the road while raising slogans to resist the police, was lifted by the personnel into the vehicle. Barricades were placed in front of the school’s entrance during the demonstration, according to the police. The protesters were later taken to a wedding hall in Vilankurichi, where they were detained.

The RSS has been conducting ‘Prathmik Shiksha Varg’, an orientation programme, at the school premises from December 24. The programme will conclude on Friday, the police said.