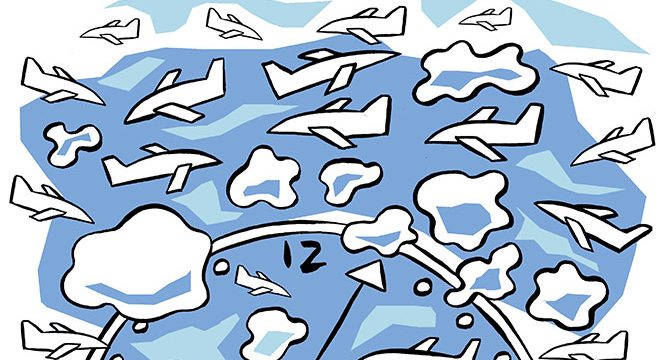 As air travel gathered steam in financial year 2021-22 (FY22) after being restricted the previous year, fewer passengers were affected by flight cancellations. FY20 was the last financial year when India’s booming aviation industry carried out full-scale operations before being completely grounded for a couple of months due to the Covid-19 pandemic.

As many as 141 million passengers had flown domestically in India in FY20.

Airlines had to shell out over Rs 3 crore to settle claims arising from denial of boarding and cancellations in FY22.

With over 130,000 such incidents, each affected passenger got just around Rs 160 as compensation on an average.

Domestic airlines are not obliged to pay any compensation for cancellations caused by “meteorological conditions, security risks, or any other causes that are beyond the control of the airline.”

They usually deny boarding to passengers with confirmed tickets if they have sold more seats than are actually available on that particular flight.

The DGCA stipulates that airlines should first request certain passengers on their overbooked flights to relinquish their seats for others in exchange for an alternate flight.

The airline is not required to compensate a passenger who has been denied boarding if the alternate flight is within one hour of the original departure time.

If the airline fails to provide a passenger an alternate flight within one hour, then it is liable to pay 200 per cent of the basic fare and airline fuel charge to the customer or a maximum amount of Rs 10,000 if the alternate flight is arranged within 24 hours.

If the airline fails to provide an alternate flight, a passenger is to be paid 400 per cent of the basic fare and airline fuel charge subject to a maximum amount of Rs 20,000.

Passengers are also entitled to receive anywhere between Rs 5,000 and Rs 10,000 for flight cancellations, depending on the period of intimation given to them by the airline before cancelling the flight.

The airline can deny paying money to any passenger it thinks has not provided their correct contact information.

While cancellations have declined more than in FY21 compared to FY20, official figures also show that IndiGo and Air India have reduced their share in the number of cancellations.

In FY22, IndiGo and Air India accounted for 17 per cent and 20 per cent of total cancellations, respectively, down from 25 per cent in FY20.

Meanwhile, Ajay Singh-promoted SpiceJet accounted for 41 per cent of all complaints related to cancellations, up from 32 per cent in FY20.

There was no improvement in the number of complaints per 10,000 during this period.