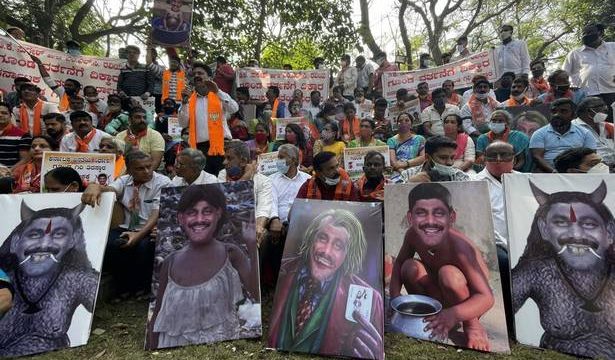 Mr. Narayan and Bengaluru Rural MP D.K. Suresh almost came to blows after a heated exchange of words at a function on January 3 to inaugurate various development works at Ramanagaram.

Video grab shows Congress MLC Ravi and MP D.K. Suresh facing off against IT/BT & Higher Education Minister C.N. Ashwath Narayan on the stage in the presence of Karnataka Chief Minister Basavaraj Bommai during a public function at Ramanagaram on January 3, 2022.

Mr. Reddy, a seven-time MLA, said the Minister addressed singularly and made derogatory remarks against Congress leaders. The Minister provoked Congress MP D.K. Suresh and other Congress leaders, which forced them to stage a protest at the function. “Why does a Minister speak like that? Will any Minister speak like that in a government function attended by the Chief Minister? Why did Ashwath Narayan provoke the MP?”

Taking exception to Mr. Narayan’s conduct on the stage, Mr. Reddy said, “This is not a jungle raj to demonstrate a leader’s manhood.” The Minister should have tolerance and speak in a disciplined manner. The MP rushed towards the Minister and indulged in a verbal duel as the latter provoked him. “Why should the MP remain silent when the Minister spoke like that?”

Voters taught a lesson to the ruling BJP in elections to the Karnataka Legislative Council and urban local bodies. “These ministers will lose deposits in the State Legislative Assembly elections in 2023 if they continue to behave like this,” Mr Reddy told reporters in Bengaluru.

KPCC president D.K. Shivakumar said the Congress would go ahead with its padayatra to demand implementation of the Mekedatu project as per the schedule on June 9 in response to an appeal by Health and Family Welfare Minister K. Sudhakar to withdraw the programme in view of the rise in number of COVID-19 cases.

“Let the Minister bring pending financial dues to Karnataka from the Centre” to fight against the Covid-19 pandemic, the KPCC chief said.

Many Congress workers have been booked under the State Disaster Management rules for organising ‘100 not out’ protests when the price of petrol crossed ₹100 per litre in June 2020. But no case has been booked against any BJP leader for attending rallies and public functions, which exposes the government’s double standards, Mr. Shivakumar said.

In Hassan, workers of the BJP staged a protest condemning Congress Lok Sabha member D.K. Suresh’s conduct at the public function in Ramanagaram. They accused the Congress leader of exhibiting ‘his goonda behaviour’. They submitted a memorandum to the Deputy Commissioner seeking action against Congress leaders of Ramanagaram.

Hassan MLA Preetham Gowda, who led the protest, said, “The Congress leaders insulted Dr. B.R. Ambedkar and Nadaprabhu Kempe Gowda, whose statues were unveiled during the function. People of Karnataka have been witness to the way Congress leaders behave in public,” he said.