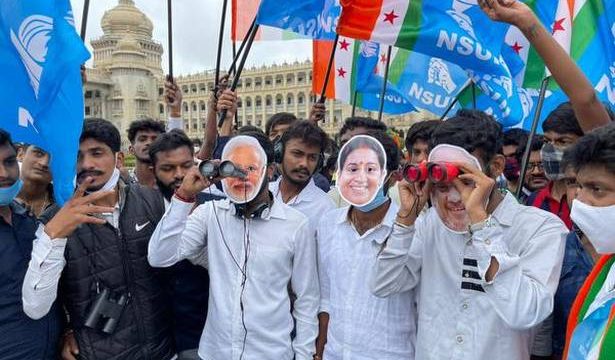 The party claims that its leaders were targetted by the Centre

Congress supporters gathered outside Vidhana Soudha in Bengaluru on July 22 to protest alleged snooping on their leaders by the Centre. Reports have claimed that Pegasus spyware, created by NSO Group of Israel, was used in India to target the phones of several prominent journalists and politicians. The spyware Pegasus is apparently sold to governments around the world by NSO Group, an Israeli company.

On July 21, Karnataka Pradesh Congress Committee president D.K. Shivakumar tweeted: “It’s not our phones; it’s our democracy which has been hacked! We have to reclaim the nation from this autocratic behaviour. Hacking into people’s phones and private lives, using that information for politics, at tax payers’ expense… these things don’t happen in democracies”.

It was reported that during the political turmoil in Karnataka in July 2019, which ended in collapse of the JD(S)-Congress coalition government and the BJP coming to power, the phone numbers of key leaders in the coalition and their associates ‘were selected as possible targets for surveillance’, according to a global investigation named ‘The Pegasus Project’.

Phone numbers of the then deputy chief minister Dr. G. Parameshwara, personal secretaries of the then chief minister H.D. Kumaraswamy, former chief minister Siddaramaiah and security personnel of former prime minister H.D. Deve Gowda were selected as possible targets, according to The Wire’s review of numbers that were of interest to the Indian client of NSO Group, a company based in Israel that developed the Pegasus spyware.