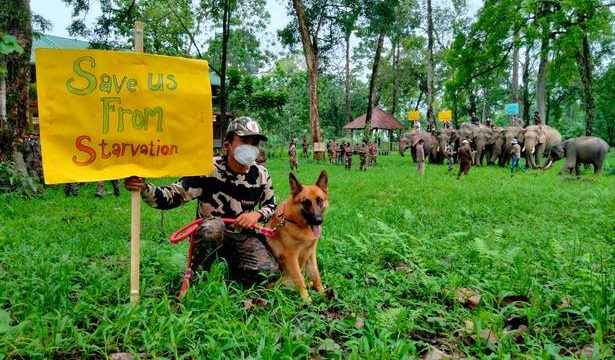 Move taken over non-payment of wages since December 2020

More than 200 contingency workers of the Pakke Tiger Reserve in Arunachal Pradesh went on an indefinite strike from Wednesday over non-payment of wages since December 2020.

The 862 sq.km. tiger reserve in Pakke-Kessang district has been left unguarded as all the 202 workers, along with their eight elephants, converged at the tiger reserve’s administrative office to demand their wages for the last six months.

“Our strike was scheduled from May 2 but was withdrawn after the Environment and Forest Minister [Mama Natung] promised that the wages would be released. We can manage somehow, but all of us have families to maintain with the meagre wages we get,” Pakke Tiger Reserve Workers’ Union general secretary Nikum Nabam said.

Other than payment of the wages of the staff under Project Tiger, the union has demanded the regularisation of the Special Tiger Protection Force (STPF), an increase of wage last revised in 2018 to ₹11,000 per month and monthly payout instead of periodic disbursement.

The Pakke contingency workers were given their wages from April-November 2020 after the National Tiger Conservation Authority (NTCA) had sanctioned ₹6.05 crore for 2020-2021 fiscal and released a part of it.

“The second instalment of ₹1.32 crore was released in January but the money is lying in the State exchequer instead of being transferred to the Divisional Forest Officer of our tiger reserve for disbursement of wages,” Mr. Nabam said, adding that the workers have been borrowing or surviving on meagre donations.

Mr. Natung said the workers should have waited two-three days for their wages.

“There were no officers to handle their wages due to the COVID-19-induced emergency situation. But the process has been started and they should get their wages in a few days,” the Minister told The Hindu from State capital Itanagar.

Green activists recalled a similar situation two years ago that led to the discontinuation of services of 53 frontline staff in the 1,895 sq. km Namdapha Tiger Reserve, India’s easternmost, in Changlang district of Arunachal Pradesh.

“It is a pity that NTCA has focussed on tiger reserves in Assam, including Nameri Tiger Reserve adjoining Pakke. We know protecting the tiger habitats in Arunachal Pradesh is crucial for the conservation of the striped cat in India, but it is difficult to focus on empty stomachs,” a member of the Pakke workers’ union said.