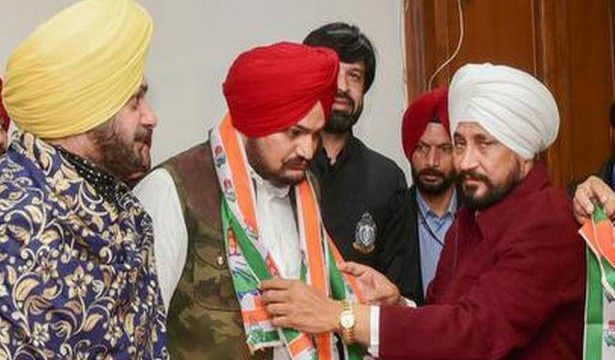 Mr. Moosewala, who has been accused of promoting gun culture and violence in his songs, joined the Congress in the presence of Punjab Chief Minister Charanjit Singh Channi and State Congress president Navjot Singh Sidhu.

Mr. Moosewala has been booked in multiple cases by the Punjab Police for glorifying gun culture under different sections of the Indian Penal Code and also under the Arms Act.

Mr. Channi said Mr. Moosewala being a heartthrob of millions of his fans across the globe would prove to be an asset for the party as he was connected to the grassroots, “Moosewala with his new assignment after entering the arena of politics would serve the people with enthusiasm, the way he earned name and fame in the world of music by the dint of hard work,” he said.

Mr. Navjot Sidhu said Moosewala had created ripples in Punjabi music with his ever-growing popularity the world over, especially amongst the youth.

Mr. Moosewala said the Congress was the only political party that offered a healthy platform, especially to ordinary people with modest backgrounds, to serve society diligently. He said he would serve people wholeheartedly.

Reacting to the induction of Mr. Moosewala, Mr. Chugh said it had exposed the Congress’s nefarious designs to destabilise Punjab. Mr. Chug said that in December 2020, Mr. Moosewala sang songs glorifying Bhindranwale (the spearhead of Khalistan movement) and other separatist leaders, and the Congress’s support to such a person was a warning bell for the State.

“The Congress is giving dangerous signals to the youth in Punjab which will lead to destabilisation of the State. Already Punjab Congress president Navjot Sidhu’s proximity to Pakistan Prime Minister Imran Khan and Pakistan Army chief Bajwa has been a matter of serious concern for the State and now the Punjab Congress has started supporting people who glorify gun culture, which might spell disaster for Punjab in days to come,” said Mr. Chugh.