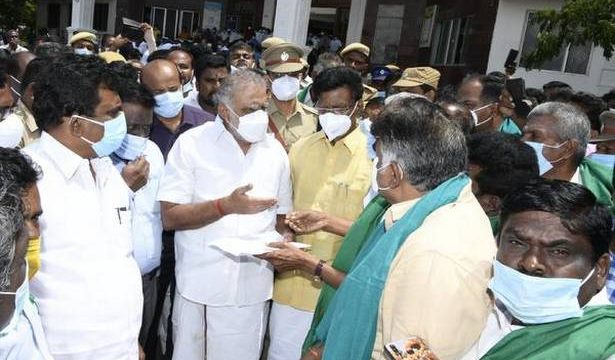 Cooperation Minister I. Periasami has asked farmers to cooperate with the Tangedco officials in preventing theft of water meant for irrigation from Mullaiperiyar dam.

He was presiding over the farmers’ grievances meeting here on Thursday.

Explaining to the farmers’ representatives from the Cumbum Valley and other places, he said that the Tangedco officials had implemented a High Court order to seize illegal motors fitted by some people. “The government is fully aware of the farmers’ interests. However, the water intended for irrigation should not be stolen by any person,” he stressed.

The DMK government had been instrumental in protecting the farmers’ rights and explained at length about late Chief Minister M. Karunanidhi’s initiatives.

Though the farmers said that they were upset and insisted that Tangedco desist from implementing the High Court order, the Minister said that he would convey their views to the Chief Minister.

The officials, who were present at the meeting, said that out of 626 connections, the vigilance teams from Tangedco made a spot inspection of around 200 electricity connections recently and found that 18 among them were illegal. They said that as per the law, water cannot be pumped from a stream or river into the wells by farmers, who claimed that they did so for irrigation purposes. More checks would be conducted, they added.

Recently, at a meeting in Madurai attended by District Collectors, Finance Minister P. T. R. Palanivel Thiagarajan had shared a data given to him by the farmers from the district that water theft from Mullaiperiyar dam was rampant in the past. “At least 100 cusecs of water was pumped into private wells by people who were close to some elected representatives in the AIADMK regime”, he said.

This amounted to a huge loss to the exchequer and urged the officials to examine them as thousands of farmers in the southern districts were deprived of their share of water from the reservoir.