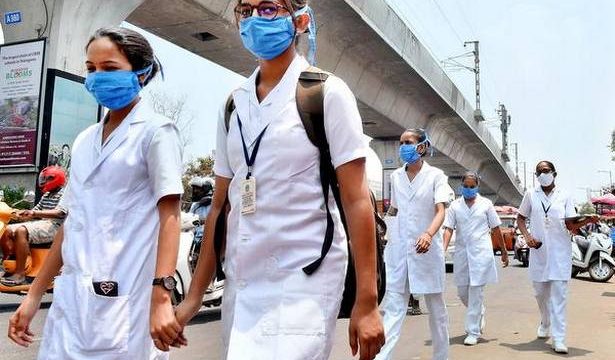 As new cases rose in Karnataka to 6,150 on Tuesday, the State government reserved 50% beds in private hospitals for COVID-19 patients.

“The Health and Family Welfare Department’s Order dated June 23, 2020, on reserving 50% beds in private hospitals and regulating rates to be charged by the hospitals for treatment of government-referred COVID patients and package rate ceiling for treating private COVID patients will continue to remain in force until further orders,” the order issued by the Chief Secretary said.

There were seven more deaths in Andhra Pradesh and close to 2,000 new infections on Tuesday morning, the highest incidence since November 8. The test positivity rate (TPR) of 31,657 samples was 6.13%, the highest since October 16.

The surge was unabated in Telangana with 1,498 cases on Monday. Six more patients died.

The highest of 313 cases was in Greater Hyderabad Municipal Corporation region, followed by 164 in Medchal-Malkajgiri.

Kerala hospital admissions rose by 100-150 patients a day in a week. The State reported 3,502 cases on Tuesday with the TPR being 5.93%. The addition of 14 new deaths on Tuesday raised the cumulative toll. Kasaragod reported reported four deaths, Alappuzha three, Kollam, Palakkad and Kannur two each, while one death was reported from Malappuram.

(With inputs from Vijayawada , Hyderabad and Thiruvananthapuram bureaus)