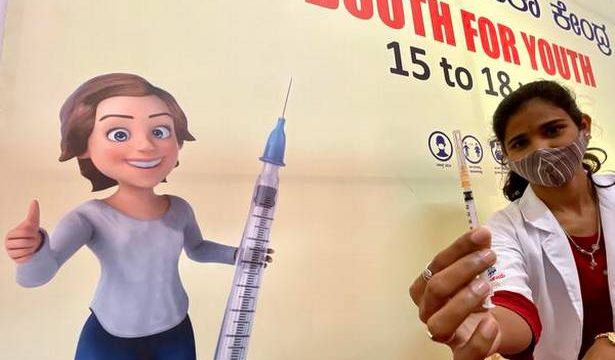 A total of 1,525 cases of Omicron variant of coronavirus have been detected across 23 states and Union Territories so far, out of which 560 have recovered or migrated, according to the Union Health Ministry’s data updated on Sunday.

Here are the updates:

The seven-time Ballon d’Or winner will miss the team’s Coupe de France match against Vannes on Monday. His status for PSG’s next Ligue 1 match on Jan. 9 at Lyon is uncertain.

"Messi has been in regular contact with our medical team, and when he has a negative test, he will travel to France, but we don’t know any more than that. I don’t know if he will be involved against Lyon," coach Mauricio Pochettino said, per Reuters. – Reuters

Prime Minister Naftali Bennett said on January 2 that Israel would offer a fourth dose of COVID-19 vaccine to people over 60 and to medical staff as it faces a surge in Omicron variant infections.

Israel last week approved a fourth dose of the vaccine developed by Pfizer and BioNTech, a second booster, for people who are immune-compromised and the elderly living in care homes.

"We now have a new layer of defence," Mr. Bennett said in a televised news conference, adding that Israel’s top government medical official, whose approval is needed to expand the booster campaign, had signed off on the latest move. – Reuters

Twitter said Sunday it had banned the personal account of far-right Rep. Marjorie Taylor Greene for multiple violations of the platform’s COVID-19 misinformation policy, the latest strike against the firebrand whose embrace of conspiracy theories has been called “a cancer” for the GOP and led the House to boot her from committees.

The Georgia Republican’s account was permanently suspended under the “strike” system Twitter launched in March, which uses artificial intelligence to identify posts about the coronavirus that are misleading enough to cause harm to people. Two or three strikes earn a 12-hour account lock. Four strikes prompt a weeklong suspension. Five or more strikes can get someone permanently removed from Twitter. – AP

U.S. Defense Secretary Lloyd Austin tested positive for COVID-19 on Sunday with mild symptoms, but would retain all authorities as he quarantined at home for the next five days.

Austin, who is vaccinated and has received a booster, said in a statement he last met President Joe Biden on Dec. 21, more than a week before he started experiencing symptoms.

"As my doctor made clear to me, my fully vaccinated status — and the booster I received in early October — have rendered the infection much more mild than it would otherwise have been," Austin added. – Reuters

The third wave of the COVID-19 pandemic has started in Tamil Nadu, Health Minister Ma. Subramanian said in Chennai on January 2.

“The infection is spreading. In the past few days, it has been rising incrementally,” he said, citing the number of fresh cases in the State, while inspecting the 17th mega vaccination camp.

Though Chennai continued to lead the State in vaccination, more than five lakh persons had not yet received even one dose of the vaccine, he said.

The Supreme Court has reverted to fully virtual mode of hearing for the next fortnight in view of the rising COVID cases.

Virtual hearings would start without exception when the court reopens post Christmas and New Year vacations on January 3.

A notification issued by the court on Saturday informed lawyers and litigants about the decision to drop the hybrid mode of hearings for the next two weeks.

Prior to Christmas holidays, the court had divided the weekdays between virtual and physical hearings of cases.

In its highest single-day jump in COVID-19 cases in the past six months, Maharashtra reported 11,877 infections on Sunday as the active case tally climbed to 42,024.

However, the number of fatalities continued to remain low with only nine deaths being reported as opposed to the daily average of 20 a few days ago. The cumulative toll now stands at 1,41,542 while 2,069 recoveries were reported in the last 24 hours.

Authorities said despite the State seeing a rise of 60% in week-on-week cases, more than 65% of them are either asymptomatic or mild. Hospitals, too, have reported no significant rise in admissions, said health authorities. At the same time, many doctors have said a clearer picture would emerge only after January 10.

Ahead of the expanded vaccination drive for 15-18-year-olds that commences on Monday, nearly 600,000 adolescents have registered for their Covaxin shots according to data on the CoWIN platform. India’s estimated population in the 14-17 category is around three crore.

The expansion comes even as India’s daily caseload increased to 27,553 and the total number of Omicron cases surged to 1,525. Delhi, Maharashtra, Gujarat, Tamil Nadu and Kerala reported the maximum number of people with Omicron and accounted for close to two-thirds of the national count.

Later this week, the Health Ministry is expected to issue guidelines on “precaution doses” and whether this third dose will be a repeat of the previous two or a different kind. Current evidence suggests that a third dose, same or different, boosts antibodies but the latter gives a larger boost, improving the odds of staving off a symptomatic infection. Two doses, however, continue to protect against disease at least for nine months, the Indian Council of Medical Research said last week, citing local as well as international studies.

Union Health Minister Mansukh Mandaviya on Sunday said States and Union Territories should take necessary measures, including setting up separate vaccination centres, to avoid mixing-up of COVID-19 vaccines during administration of shots to those in the 15-18 age group.

Inoculation of children in this age category will start on January 3.

The vaccine option for those in the 15-18 age group would only be Covaxin, according to a set of new guidelines issued by the Union Health Ministry. Besides Covaxin, the adult population of the country is being administered Covishield and Sputnik V. – PTI

Concerned over the recent surge in the COVID-19 cases throughout the country, Congress president Sonia Gandhi has directed Punjab Chief Minister Charanjit Singh Channi to be fully prepared to combat any eventuality arising out of the pandemic, especially in the wake of the new variant — Omicrcon.

According to an official statement, Ms. Gandhi, who spoke to Mr. Channi over phone, said there should be no complacency in this regard and concerted efforts should be made to face any possibility of emergency efficaciously.

Apprising Ms. Gandhi, the Chief Minister said he was constantly monitoring the current situation with the Health, Medical Education & Research Department and other line departments to put in place all the requisite infrastructure in place to effectively tackle any emergency in case the situation so warrants.

The number of persons vaccinated in Tamil Nadu has crossed the 8.5-crore mark on Sunday, Health Minister Ma. Subramanian said at the end of the 17th mega vaccination camp.

On Monday, Chief Minister M.K. Stalin will launch vaccination for students aged 15- 18 at Manthope Girls Higher Secondary School at Saidapet. Under the drive, the State expects to cover 33.46 lakh beneficiaries, including students at juvenile homes and orphanages, Mr. Subramanian informed the Union Health Ministry at a video conference earlier in the day. He said the Health Department was coordinating with the School Education, Higher Education and Social Welfare Departments to cover all beneficiaries. “We plan to achieve 100% coverage through the drive.”

Jammu and Kashmir Lieutenant Governor (L-G) Manoj Sinha is going to launch the COVID-19 vaccination drive for children in the 15-18 age group on Monday from a government school in Jammu, an official said.

He said the vaccination drive for children in the 15-18 age group would be carried out from January 3 at centres located in selected schools across the union territory.

As many as 8.33 lakh children will be targeted for inoculation during the drive in Jammu and Kashmir, the spokesman said. – PTI

The Rajasthan Government on Sunday capped the number of people attending political and other rallies, dharnas, fairs and weddings at 100 and ordered closure of schools in Jaipur city for classes 1 to 8, in view of rising COVID-19 cases.

The decisions were taken at a Covid review meeting chaired by Chief Minister Ashok Gehlot in Jaipur.

Schools for classes 1 to 8 will be closed in Jaipur from January 3 to 9, while the other restrictions are applicable for entire Rajasthan and will come into force from 5 a.m. on January 7, according to guidelines issued by the home department.

A maximum of 100 people will be allowed in marriage functions, public, political, social or educational meetings and processions, dharnas, fairs and such events, it stated. – PTI