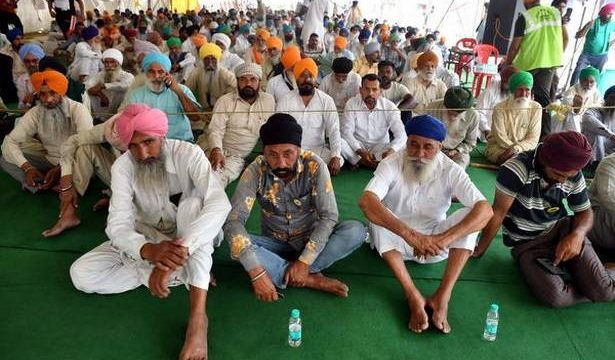 Despite a spike in COVID-19 cases and imposition of curbs across many States, protesting farmers at the Singhu border said they were determined to continue with their movement.

Several protesters who have been camping at the borders for over four months now said on Wednesday that farmers had overcome the fear of the virus and they had altered their rotation schedules to ensure they travelled during the day and avoided the curfew hours.

“We will continue our movement at the same pace,” said Sukhjeet Singh Sidhu, a farmer from Punjab’s Patiala district. “Neither the night curfew nor the ban on political gatherings will have any effect on our movement. We will continue with the rotation system that we have evolved and nothing can stop us from continuing our protest at this point.”

Manjeet Singh, another farmer from Patiala, said the Punjab government had stood by the farmers. “Our State government has supported us earlier as well and authorities are not really bothering farmers who are on their way to the Singhu border.”

“People are ensuring that they reach their respective destinations — be it the border or the villages — in time. Our vehicles leave in the morning itself to ensure that curfew hours are not violated. However, we have not faced any difficulties till now from the authorities. As for the virus, we have been lucky that there has been no outbreak at the protest site itself. So we are not worried,” Mr. Singh said.

Sukhwinder Singh, a farmer from Punjab’s Roopnagar district, said the announcements of restrictions and curbs had only strengthened the farmers’ resolve.

“This is the government’s ploy to stop the protest and once the elections are over, they will impose similar curbs across the country. But that will not affect our movement one bit. Even now schools and colleges are shut and we have seen an increase in participation from the youth. Several have reached the Singhu border in the past few days. No matter what curbs are imposed on us, our movement continue,” said Mr. Singh.