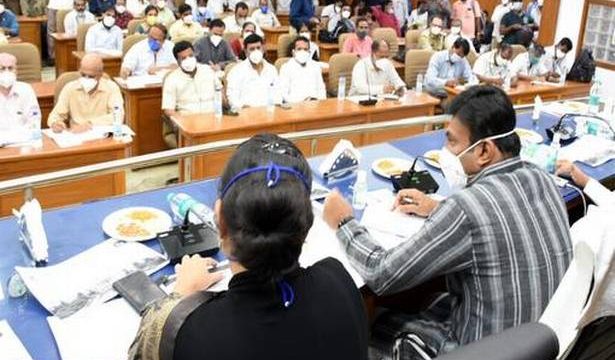 Health Minister appeals to the people not to panic, but take precautions

In an effort to remove the public fear surrounding COVID-19, Minister for Health and Family Welfare K. Sudhakar has said that the death rate had fallen in the second wave of the pandemic as compared to the first wave last year and appealed to the people not to panic, but take precautions.

“The COVID-19 death rate in the first wave was 1.3% and now it has fallen to 0.6%. So, people need not worry but need to take precautions as panic and fear tend to increase the death rate. The death rate in Kalaburagi district is slightly higher at 0.69% as compared to the State average. The district administration should optimise the utilisation of manpower and infrastructure to reduce the death rate as well as contain the spread of the pandemic,” he said.

He was addressing a media conference in Kalaburagi after visiting State-run Gulbarga Institute of Medical Sciences (GIMS), a COVID-19 hospital, on Saturday.

On the shortfall of Remdesivir injection, Mr. Sudhakar said that public misconception on the use of the drug had led to increased demand and created the shortfall.

“Last year, over 11 lakh COVID-19 patients had recovered without taking Remdesivir injection. However, a public misconception that Remdesivir does a great job in treating the pandemic has created a rise in demand. Doctors will decide who needs the drug and we have issued guidelines to doctors as well about its use. I would like to tell private facilities and doctors to procure the drug only for immediate use. If you [the private hospitals] stock for future use, we will cancel your licences. You will be held responsible even for the wrongdoing of your employees in this respect,” he said.

In a meeting with the senior officers earlier in the day, Mr. Sudhakar expressed discontentment over the functioning of the Health Department in the district and warned the public health staff of stringent action if they failed to discharge their duties and handle the situation.

“You [District Health and Family Welfare Officer] have enough staff and resources and you need to efficiently utilise them. There are complaints that Remdesivir injection is being sold at inflated rates in the black market. You should form a team to monitor the movement of the drug as well as the oxygen and submit a report on a daily basis. We will take stringent action against the public servants who fail to discharge their duties,” he said.