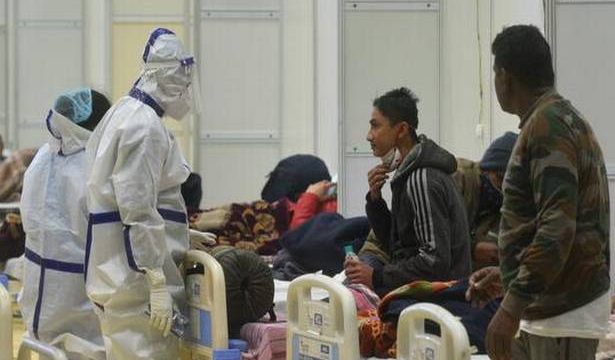 The small decline in the case count could be due to drop in the number of tests conducted on Sunday, the results for which were made available on Monday. On Sunday, 13.52 lakh tests were conducted, compared to 15.63 lakh on Saturday and 15.29 lakh on Friday.

The numbers are based on State bulletins released until 9.30 p.m. Jharkhand, Ladakh, Lakshadweep and Tripura had not yet released data for the day.

India’s cumulative tally was 3,58,55,477, with the number of active cases nearing eight lakh on Monday.

Genomic sequencing of a proportion of COVID-19-positive samples from across the States and Union Territories has detected 4,033 cases of Omicron so far. Of these, 1,552 have since recovered or migrated

The number of Omicron cases detected so far from States are, Maharashtra 1,216, Rajasthan 529, Delhi 513, Karnataka 441, Kerala 345 and Gujarat 236, according to the Union Health Ministry’s press release on Monday morning.

The national case fatality rate for COVID-19 now stands at 1.36%.

Odisha’s daily COVID-19 tally on Monday showed a marginal increase from that of the previous day and stood at 4,829, a jump by 2.43%. The number of Omicron cases detected so far is 103, with 28 more cases detected on Monday.

New cases continue to rise in Kerala with the State logging 5,797 cases when 45,691 samples were tested in the past 24 hours. However, daily hospitalisations are remaining more or less steady and the same is the case with ICU and ventilator occupancy. With the increase in new cases, the State’s active case pool has risen to 37,736, of whom 2,820 persons being treated in hospitals across the State.

(With inputs from The Hindu data team)