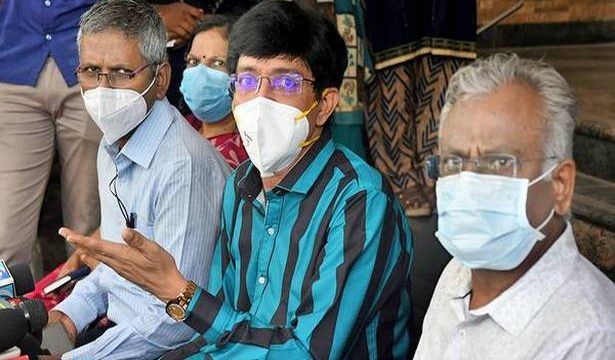 Urging people not to believe rumour about a total lockdown after polling on April 6, Health Secretary J. Radhakrishnan on Monday said restrictions will be tightened in COVID-19 containment areas.

Restrictions will gradually be enforced for non-essential activities based on government’s policy decisions and views of public health experts. “Some steps should be taken without affecting the public and with public cooperation we can avoid an out-of-control situation like Maharashtra. Of the 4.5 lakh areas, there are 925 containment areas that had more than three COVID-19 cases. Restrictions will be tightened in these areas. We will have focus volunteers and take up testing,” he told reporters shortly after an inspection at the State Vaccine Store.

He said people should learn to avoid crowding at funerals, marriages and cultural events, and avoid unnecessary travel. Starting April 7, the day after polling, he said door-to-door fever surveillance in containment areas and screening centres for triaging of COVID-19 patients would be taken up in full swing.

Noting that there were over one lakh COVID-19 cases in India on Sunday, he said that in Tamil Nadu, the cases were rising gradually but the positivity rate was not as high as it was in Maharashtra, Chhattisgarh and Punjab, he said. “Nevertheless, the numbers are slightly alarming and we have crossed 3,500 cases a day. There is continuous monitoring, and we are ensuring that there is no lacunae in testing, tracking and isolation. A minimum of 20 to 30 contacts of a patient are being traced, tested and isolated,” he said.

One of the main challenges was house to house fever surveillance in containment areas, he said and added: “Starting April 7, we will take up house-to-house fever surveillance in containment areas in full swing. We did not carry out the same to avoid creating confusion during election time. The field-level teams in each of the 15 zones of Greater Chennai Corporation and monitoring teams at the district-level are in place,” he said.

Another area of concern was vaccination. The State has so far received nearly 54 lakh doses of the vaccines but the off-take had been low, he said. Only around 15,000 people were vaccinated on Sunday.

“The disease is on the rise. All those aged above 45 should take the vaccine. We could not promote vaccination on campaign mode due to the model code of conduct. However, after April 7, we will take up this on a campaign mode to motivate people who are eligible to get vaccinated… Some might get infected after vaccination. It is said to have 70 to 85% efficacy 14 days after the second dose. In such cases, it will not be a severe case of COVID-19,” he said.

Noting that vaccine hesitancy continued in the State, he said that neighbouring Kerala and Karnataka had more takers than T.N. The average capacity of a vaccination centre was 100 persons a day.

On an average, RGGGH and Government Medical College Hospital, Omandurar Estate, vaccinate up to 500 persons a day but in many cities, districts and rural parts, only 25 to 40 persons are vaccinated, he said.

“The Centre’s supply of additional doses depended on the three-day average utilisation. States that have higher utilisation such as Uttar Pradesh, Bihar, Odisha, Gujarat and Madhya Pradesh are getting more vaccines supplied. There is a view that we are not utilising the already supplied vaccines,” he said.

Due to lack of adherence of SOPs such as checking for temperature and hand hygiene in places such as the service sector, the disease was spreading from one person to many. “Elections were a challenge, but do not assume that cases would drop after April 6. We have had cases through banks, service sectors and training centres,” he said. He said although schools were closed, training centres were being run illegally.