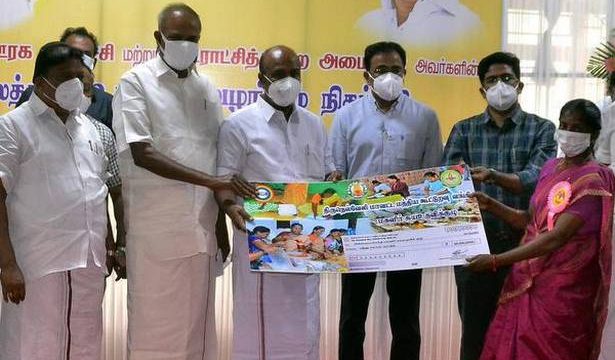 ‘We have approached court, will hold election by September 15 as per SC direction’

Minister for Rural Development K. R. Periakaruppan has said that delimitation of local body wards was done erroneously by the previous AIADMK government with the objective of scripting DMK’s defeat in the civic polls.

Speaking to reporters here on Thursday after inspecting a few development works and participating a review meeting with Assembly Speaker M. Appavu in chair, Mr. Periakaruppan said the delimitation of a good number of wards across the State was done by the previous AIADMK government with the motive of ensuring the DMK’s defeat. Still it lost more than 55% of the local body wards to the DMK, as a precursor to the Assembly polls.

Admitting that there were problems in delimitation of wards, the minister said the DMK-led government that returned to power only two months ago could not be held responsible for the difficulties relating to the marking of boundaries of the wards. “However, we have approached the court for conducting the elections, and hold it before September 15 as directed by the Supreme Court. With assistance from the State government, the State Election Commission will conduct the polls before the deadline,” Mr. Periakaruppan said.

Despite mismanagements in implementing infrastructure projects and handling of funds by the previous AIADMK government in the local bodies, the Department of Rural Development would strive hard to find permanent solutions to issues pertaining to education, drinking water, healthcare, road, electricity by weeding out those inefficiencies.

“Over the past two months, we had to concentrate only on the COVID-19 management and saving the patients from the viral infection by ensuring appropriate line of treatment to the affected. The number of fresh cases that once rose to 37,000 a day had come down to 2,000 due to the concerted efforts of various government departments, including Department of Rural Development. Hence, the State government has accelerated the development works, especially in rural areas, to ensure the holistic development of Tamil Nadu,” Mr. Periakaruppan said.

The minister handed over welfare measures worth ₹1.38 crore to 40 beneficiaries and inspected 14 infrastructure development projects being implemented on a total outlay of ₹1.64 crore in Palayamkottai and Maanur areas. He also inaugurated fish vending by self-help groups and a fish food depot at ‘Pon Bharani’ commercial complex near Venthankulam new bus stand. The fish food depot would get marine products from neighbouring Thoothukudi and Kanniyakumari districts to sell to consumers at the right price every day.