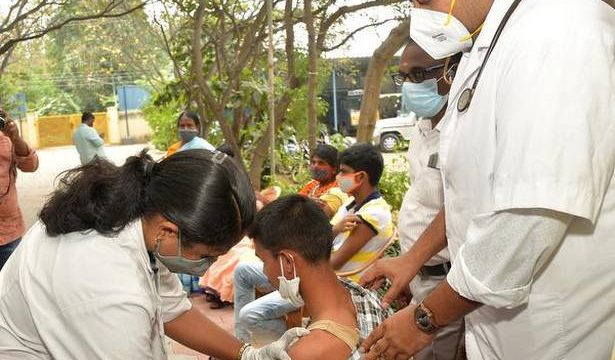 Nearly 3,000 kids to get the jab through District Differently-Abled Welfare Office

The Tiruchi district administration began inoculating nearly 3,000 children with intellectual disabilities as part of the effort to vaccinate children in the 15 to 18 age group. The students, many of who reside in special schools would be approached by a team of the health department under the guidance of the District Differently-Abled Welfare Office.

The drive to vaccinate intellectually disabled children began at the Intact Special School in K. Sathanur, where 30 students, the majority of whom were girls were given Covaxin, the authorised vaccine for the age group. Since the campus was residential, the caretakers were instructed to monitor the students after the jab was given.

Mohammed A. Hakkim, doctor in charge of the vaccination drive, and S. Chandramohan District Differently-Abled Welfare Officer inaugurated the drive and vaccinated the students. Their blood pressure and other vitals were checked prior to the vaccination. “We have inoculated 30 students here, there are a few more students at special schools and other homes for them in the district,” Dr. Hakkim said. The dose was 0.5 ml, same as that of adults.

Health officials said that while they were able to reach students at educational institutions, tracing dropouts and those working would be more difficult. “We are committed to achieving 100% soon,” the official said.

On Wednesday, Pudukottai had inoculated 49.38% of the eligible population between 15 and 18, while Ariyalur had vaccinated 51.18%.