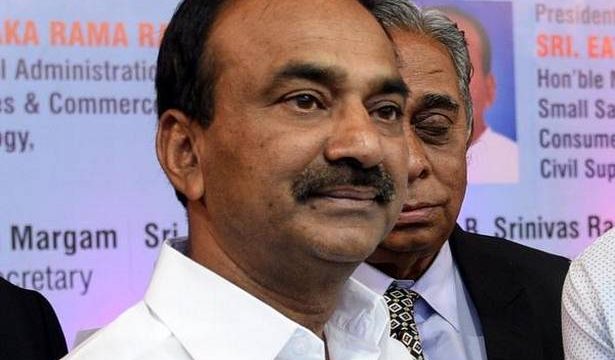 He was involved in a land grabbing controversy

The axe fell on Eatala Rajender finally as he was dropped from the Cabinet on Sunday evening in the wake of the controversy surrounding him over land issues.

A press communique from Raj Bhavan said Governor Tamilisai Soundararajan has dropped Mr. Rajender from the Council of Ministers with immediate effect on the advice of the Chief Minister. The removal of Mr. Rajender followed the submission of a survey report by Medak Collector A. Harish on grabbing of 66 acres and one gunta of assigned land, by the former for a mega hatchery owned by his family at Atchampet village of Masaipet mandal.

Mr. Harish led a survey of lands by half a dozen teams of the Revenue at Atchampet and adjoining Hakimpet villages on orders of the Chief Minister K. Chandrasekhar Rao. Some villagers had given a representation to Mr. Rao at his farm house on Friday afternoon saying the Minister and his followers had threatened them to give up their lands. Mr. Rao immediately ordered Revenue, Vigilance and Anti-Corruption Bureau inquiries into the complaint while divesting Mr. Rajender of his health portfolio.

The removal of Mr. Rajender paved way for either induction of a new Minister in his place or reshuffle of the entire Cabinet.