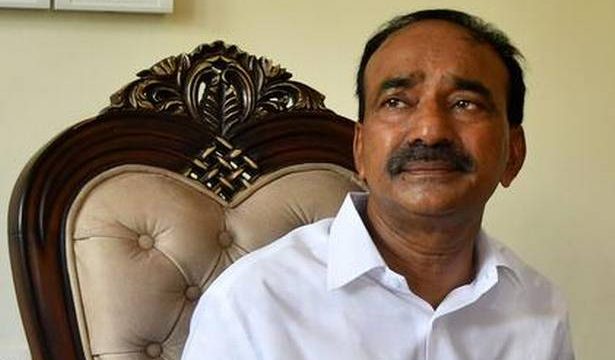 Former TRS leader to join the party in New Delhi

Former minister for Health Eatala Rajendra is scheduled to pay another visit to New Delhi either on June 13 or 14 to formally join the Bharatiya Janata Party (BJP) in the presence of party national president J.P. Nadda, it is learnt here on Monday.

Party sources said TS BJP president Bandi Sanjay Kumar, who has been in constant touch with the ex-TRS leader, will be talking to the latter again on Monday night before finalising the time and date of the joining. Member of Parliament from Secunderabad and Union Minister of State for Home G. Kishan Reddy, another key leader, instrumental in this latest entry into the party, will also be taken into confidence before finalising the plan.

Mr. Rajender had already visited Delhi and had an initial round of discussions with the BJP leaders there on what lies in store for him if he joined the party. Apparently, the former minister is keen that Union Home Minister Amit Shah be present when he makes a formal entry but this has not yet been finalised considering his preoccupations. Party sources indicated that apart from Mr. Nadda, other leaders to be present could be general secretary Tarun Chugh, Mr. Kishan Reddy, Mr. Sanjay Kumar and Mr. Vivek Venkatswamy.

It is quite possible Mr. Rajender would be taken to Mr. Shah’s office or residence later too. As far as the BJP is concerned, it would want him to resign from the Huzurabad Assembly constituency and contest on the party ticket in the subsequent byelection as it feels a victory could be the perfect launch for the blitzkrieg to be unleashed against the current ruling dispensation in the State.

The former minister is presently in his Huzurabad constituency, holding parleys with his followers on the challenges ahead and also to keep his flock together in view of the determined effort of the ruling Telangana Rashtra Samithi to wean them away.