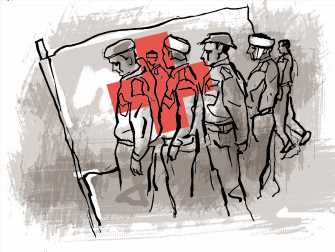 ‘All PoWs recounted that one of the worst aspects of their captivity in Tibet was the constant attempt at brainwashing by Chinese Communist propaganda,’ reveals Claude Arpi.
All illustrations: Dominic Xavier/Rediff.com

While the media speaks of the ‘Wuhan Consensus’ or ‘Chennai Connect’, it is necessary not to forget that several aspects of the 1962 India-China War have never been properly clarified, mainly due to the lack of official records on the Indian side and the fact that successive governments have preferred to ‘hide’ what happened in 1962, sometimes by ignorance, more often due to an excessive sense of secrecy (or guilt?).

For the Indian nation, the 1962 conflict with China has been one of the most traumatic post-Independence events; for the more than 3,000 Indian prisoners of war (PoWs), the experience was harrowing.

To give an example of the ‘hidden’ dark side-effect of the War, the record of the debriefing of the PoWs when they returned to India has never been made public.

All PoWs recounted that one of the worst aspects of their captivity in Tibet was the constant attempt at brainwashing by Chinese Communist propaganda.

One officer remembered: “The Chinese discovered that their political propaganda was effectively countered by some of us whenever their officers came to us for ‘friendly chats’.”

“In the event, it had no effect on any of our JCOs and the result was that when we met the NCOs at mealtimes twice daily, the same was effectively countered by all of us for ensuring that they are not wrongly influenced.”

“For this realisation to set in, took the Chinese authorities almost one month. It was then that all eight of us were shifted to another hut.”

“Although this reduced our contact time with the JCOs, we nevertheless still met twice daily at the langar and made it a point to counter some of the blatant lies which the Chinese were trying to spread.”

“Somehow the Chinese had come to the firm conclusion that if they could mete out exemplary punishment to one of us, the articulation of opposing viewpoints to their propaganda would either stop or would be stifled to a low murmur.”

“To break their morale, some officers were eventually sent to solitary confinement for weeks; this too did not work.”

The Chinese account of the camps does not mention the constant indoctrination sessions to which the Indian jawans and officers were subjected; China just notes that meetings were organised to discuss ‘according to the wishes of the Indian prisoners… on the right and wrong issues in the Sino-Indian border dispute.’

Sixty-seven years after the War, it is time to release these records.

The Role of the Red Cross 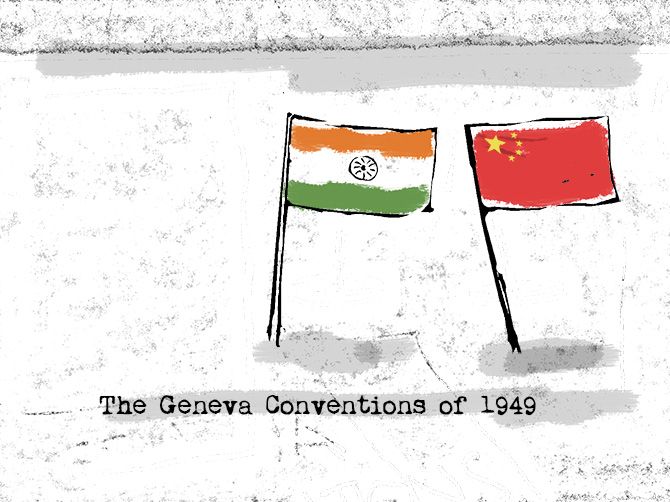 Another regrettable aspect is that one forgets that the Red Cross played a crucial role in getting the PoWs released in several batches in 1962/1963.

Having been unable to find records in the Indian archives, I decided to visit the archives at the seat of the International Committee of the Red Cross (ICRC) in Geneva, Switzerland, in order to reconstruct what happened between the different protagonists before the Indian PoWs were released by China.

My discoveries are captivating, particularly the correspondence between the Indian Red Cross’s then president Rajkumari Amrit Kaur, its then general secretary Major General C K Lakshmanan with the ICRC and the Chinese Red Cross Society (CRCS).

As both India and China were signatories to the Geneva Conventions of 1949, the ICRC had the mandate to protect all victims of international and internal armed conflicts; regrettably, the Communist regime in Beijing systematically refused to acknowledge this fact.

An important legal element needs to be noted; there was no formal declaration of war between China and India and the diplomatic ties between the two nations were not severed during the months following the war.

China used this fact to tell the ICRC that Delhi could directly deal with Beijing… if any problem existed.

While China remained keen to negotiate directly, on the Indian side, the prime minister probably felt betrayed and he preferred non-aligned countries to act on India’s behalf.

This greatly hampered an early solution to the PoWs’s issue.

The ICRC communicates with Beijing

On December 28, the ICRC handed over a note verbale to the Chinese Red Cross; this gives a summary of the events between October and December 1962 and put the narrative in perspective: ‘During the fighting which took place in October and November 1962 between Chinese and Indian forces, more than two thousand Indian military personnel were taken prisoner,’ further noting that 600 wounded and sick were repatriated at the beginning of December and that the Chinese Red Cross had then transmitted to the Indian Red Cross the addresses and news of the health of 528 Indian prisoners.

The note verbale continues: ‘The Indian authorities for their part reported that no Chinese prisoner was held by them. On the other hand, as from November 20, they have interned about 2,000 civilians of Chinese nationality or origin.’

What is striking is that during the seven months between October 1962 and May 1963, the correct figure of PoWs will keep changing.

Even today, two different figures exist, varying by some 600 prisoners.

The note gives the chronology of the ICRC’s initiatives: ‘On October 23 (three days after the Chinese attacked), the ICRC offered its services to the IRC on behalf of all the victims of events, including prisoners. On November 1, it requested the Government of the People’s Republic of China and the Government of India, through the intermediary of their representatives in Geneva, to take position on the application of the Geneva Conventions.’

The note reminds Beijing that these conventions had been ratified by India on November 9, 1950, and by the Chinese People’s Republic on December 28, 1956.

The ICRC wanted China to provide a list of the prisoners, information on their health as well as the authorisation for an ICRC representative to visit the PoWs in Tibet.

On November 15, Beijing was informed that the ICRC had sent Andre Durand, its delegate general for Asia to New Delhi to coordinate the release of the PoWs with the IRC and the Indian government.

Four days later, a confirmation was given in writing by Delhi that it would adhere to the Geneva Conventions.

Though some of the clauses would be implemented in the coming months, the Geneva Conventions would never be officially acknowledged by Beijing.

Despite repeated reminders to the Chinese government, an ICRC representative was never permitted to visit the PoWs’ camps in Tibet.

On November 28, the Chinese Red Cross argued that as normal contacts had been maintained between the Chinese and Indian governments on all questions concerning Indian prisoners, the issue should be addressed directly between Delhi and Beijing.

On December 2, the Indian Red Cross asked for the authorisation for its own delegates to visit the Indian prisoners of war in Chinese hands; this too was refused. 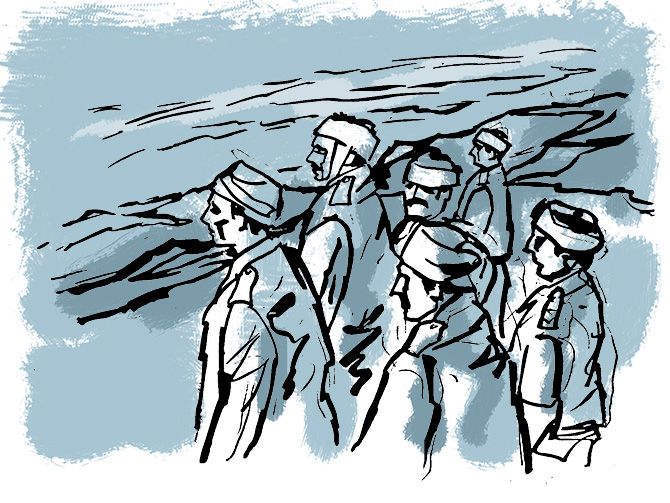 On December 5, a first batch of 64 wounded Indian PoWs was released from Bomdila in NEFA (then North Eastern Frontier Agency, now Arunachal Pradesh).

Two weeks later, the IRC, while receiving another batch of Indian wounded soldiers in Dirang handed over 2,000 parcels of food and clothing for the Indian prisoners in Tibet; this was a major success for Rajkumari Amrit Kaur, General Lakshmanan and their team.

The ICRC again asked for repatriation ‘within a short space of time’ of all Indian PoWs still in Chinese hands.

The Chinese Internees in Deoli

The Chinese cleverly opened another propaganda front; they started equating the PoWs kept in Tibet with the Chinese civilians interned for security reasons in Deoli in Rajasthan; even after Andre Durand was allowed to visit Deoli on December 12, 1962, he was not allowed to visit Tibet.

On February 18, Han Nien-Lung, director of the general office of the ministry of foreign affairs, declared that ‘the Indian government cover up India’s crime of persecuting Chinese nationals.’

At the same time, he spoke of ‘the lenient treatment of the captured Indian military personnel by the Chinese side.’

What was the situation in early 1963?

By early January, the Indian Red Cross had received the names of only 1,132 PoWs, while 715 wounded prisoners had been released and 13 bodies handed over.

The names of more than 2,000 PoWs were still missing.

On January 25, 1963, the ICRC’s executive director wrote to General Lakshmanan to draw the IRC’s attention to the announcements of the China News Agency that 2,156, (or 3,350) Indian POWs were still in Chinese hands.

The released figures of the PoWs were, to say the least, confusing.

A message to Marshal Chen Yi

Finally on February 6, the ICRC president decided to write directly to Marshal Chen Yi, the Chinese minister of foreign affairs.

On February 18, an answer came to the cable sent to Marshal Chen: ‘Since the Sino-Indian border clashes, the Chinese government has all along given good treatment in every respect to the Indian military personnel who were captured in the course of their attacks on the Chinese frontier guards.’

Beijing kept repeating that it was India who attacked China.

Beijing’s conclusion was it was not necessary for the ICRC to take the trouble to visit the prisoners.

However it found most regrettable that the India PoWs ‘captured in the course of the Chinese frontier guards’s counterattacks in self-defence’ were equated with the ‘law-abiding overseas Chinese illegally detained by the Indian authorities.’

On February 27, the IRCR confirmed to General Lakshmanan that the total number of Indian prisoners of war still in Chinese hands was 3,319, excluding the 716 wounded and sick who have been repatriated and the 13 bodies returned by the Chinese Red Cross.”

Announcement of the release of all PoWs

Finally on April 4, the CRC officially wrote: ‘Our government announced on April second its decision to release all Indian military men whom Chinese frontier guards in Tibet and Sinkiang regions captured during their counterattacks in self-defence stop we have contacted indcross (IRC) directly to make arrangements for their repatriation stop thanks for your concern.’

During the following weeks, all the PoWs detained by China would be released in batches.

The fact remains that many details are still ‘secret’ — the number of camps, location of these camps, treatment of the PoWs, etc.

When the next ‘Connect’ takes place, India should request China to provide this information.

Claude Arpi is a Senior Contributor to Rediff.com and has contributed many exclusive features on the 1962 War, some of which you can read in the related links posted with this feature.