With the aim of merging science education with entertainment so as to encourage a scientific temperament, the objective of the Science City has been to focus on “informal community-based learning”. 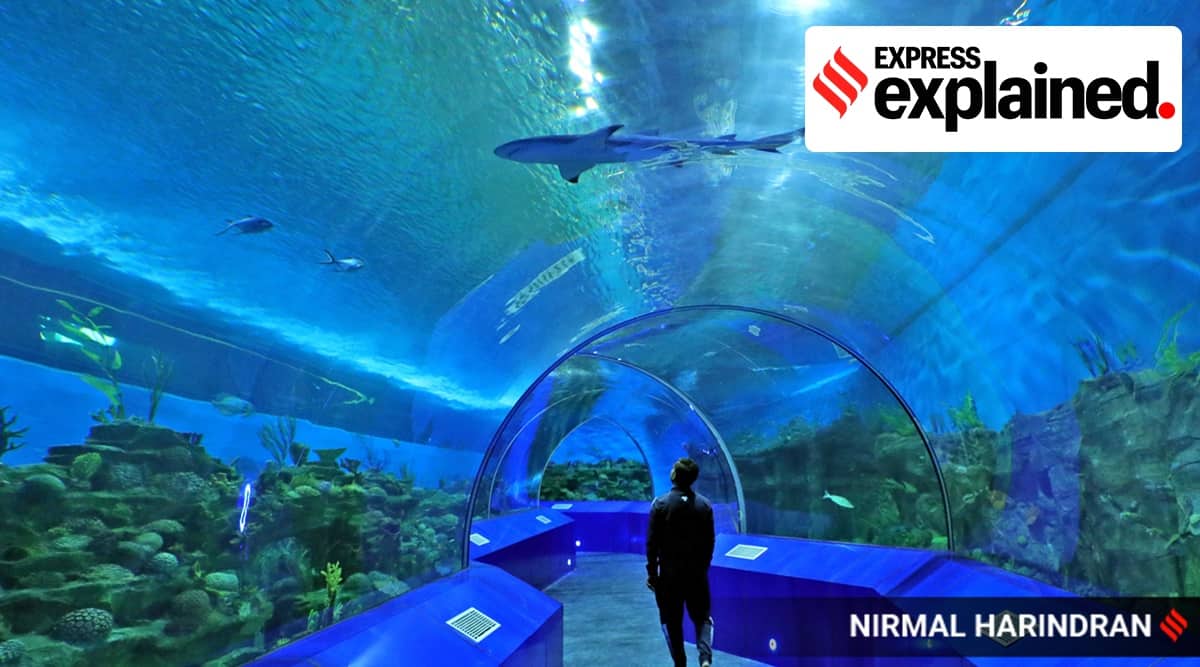 Prime Minister Narendra Modi will be inaugurating the aquatic gallery, robotic gallery and a nature park in the Science City premises of Ahmedabad on July 16. The inauguration will be held virtually.

How did the Science City in Ahmedabad come into being?

With the aim of merging science education with entertainment so as to encourage a scientific temperament, the objective was to focus on “informal community-based learning,” and has often been a popular school trip destination, with subsidised ticketing so as to incentivise visits by groups of schoolchildren.

Apart from a number of bureaucrats on Science City’s board, councils and committees, other members include members of the science community, such as director general of National Council of Science Museum (NCSM also runs Science City in Kolkata) and ISRO Space Application Centre (SAC, Ahmedabad) director.

The Science City had also served as the key venue for the biennial Vibrant Gujarat Global Summit until 2009.

What have been the developmental milestones for Science City so far in the two phases?

The first phase of Science City housed an IMAX 3D Theatre in 2002 – a first in India. The first phase also saw the establishment of a ‘hall of space’ and ‘hall of science’ in its main dome-shaped building as well as an energy education park, a life science park, a children’s activity centre, simulated thrill rides, amphitheatre, musical fountain, and a planet earth pavilion which informs about the planet and its natural processes. As per GCSC, Science City “attracts an annual footfall of over 8 lakhs.” The second phase now includes three key developmental additions — aquatic gallery, robotics gallery and nature park — is expected to be inaugurated by the Prime Minister on July 17 as per a Science City official. As per the tender document inviting bids for organising the inauguration programme, the inauguration event “is expected to have about 2,500 participants.” 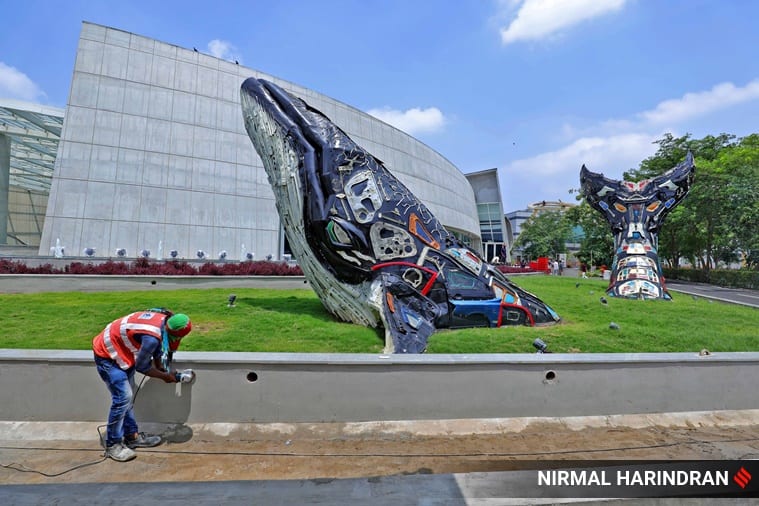 What will the aquatic gallery entail? How will it be maintained?

At the aquatic gallery, sprawled over an area of over 15,000 square metre, 68 tanks comprising fresh water, brackish water and marine water, 188 marine species, including amphibians and penguins, numbering in 11,690 are expected to be housed. In the works for the past three years, Covid-19 pandemic delayed the project by nearly a year, said a DST source. A key attraction in the aquatic gallery is the 28-meter shark tunnel which will have grey reef sharks, bonnethead sharks and zebra sharks.

The first step towards realising the gallery started with a general consultant’s view, followed by a detailed design architect, after which Shapoorji Pallonji, which has a joint venture with New Zealand-based Marinescape gave the gallery shape.

Marinescape is expected to provide exhibit and technical support, and the Shapoorji Pallonji-Marinescape JV will be maintaining the gallery for a period of five years at least. The construction and maintenance cost Rs 260 crore and the aquatic gallery is “expected to be the largest public aquarium in India,” according to an official statement from the Science City. 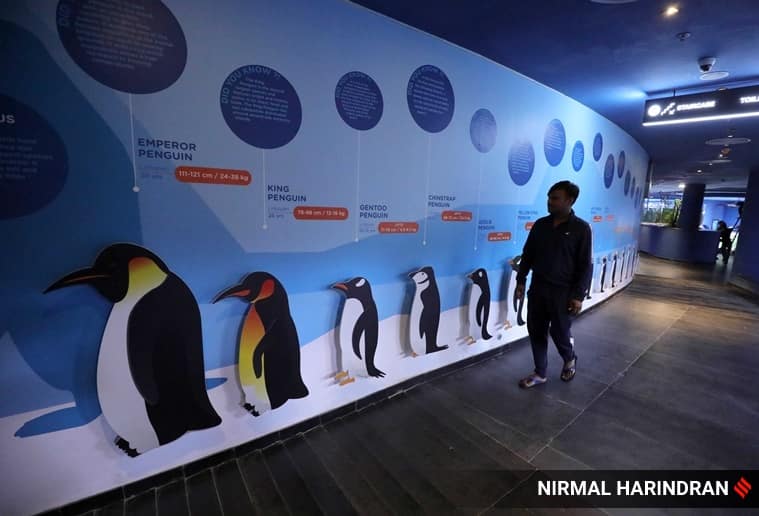 Explaining the procuring process of the species, DST secretary Vijay Nehra said, “For example the penguins (that will be exhibited) that we are getting from South Africa, they are already in quarantine at the source. The first step is, all animals are quarantined at the location from where they are being sourced. Then medical tests to check for diseases are conducted. For transportation there are detailed standard operating procedures. Then once they arrive here, they are quarantined again. This is within the aquatic gallery premises, in the back-end and not visible to the public.”

As another DST official said, “Since these species are coming from various eco-regions, they need to be acclimatised in different stages, before they finally come to the exhibit tank. Each stage can take anywhere between one to two weeks. Since this is a very fragile ecosystem, any slip-up can lead to deaths of the species.”

The multiple ecosystems which are being emulated in the 68 tanks, such as the Indian Zone, the Asian Zone, the African Zone, the American Zone etc, will require precise maintenance of several water parameters such as pH level, salinity level or TDS level, chemical oxygen and bio-oxygen demand etc depending on requirement of species. . There are also laboratories in the back-end of the gallery, to facilitate on-the-spot testing of water samples and a team of marine biologists will also be present, facilitated by the Shapoorji Pallonji-Marinescape joint venture.

Touch pad displays are also on the site to select a species and to learn more about it. For further information on the said species, one can also scan a QR code on the touch-pad displays which would then take the viewer to a mobile application with further information. The gallery also houses an interactive exhibit and a 5D theatre.

Building and installation design has also factored in the seismic zone and related considerations and other vulnerabilities.

As per the Science City website, the aquatic gallery entry fee is Rs 200 and is subsidised to Rs 50 for school groups with a minimum of 10 children in the group. 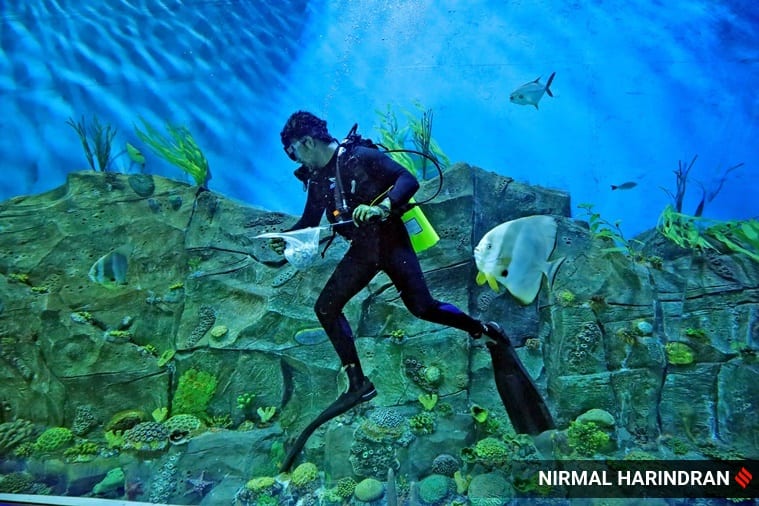 What is being done to factor in deaths of species in transit or unnaturally?

Gujarat government’s earlier attempt at exhibiting exotic species at Kevadia Park at the Statue of Unity had run into controversy after some animals meant to be exhibited at the park, had died in transit while being brought from South Africa. Nehra says that with the aquatic gallery, the primary approach is to prevent “any such incident”. In the last fortnight at least six meetings have been conducted by the DST secretary to go through fact-finding and inquiry reports compiled following unnatural deaths of animals, either nationally or globally. “This is so that we take the lessons from the mistakes of other people and minimise the loss by adopting this particular approach,” says Nehra.

What does the robotics gallery exhibit?

The robotics gallery, constructed by Vadodara-based Cube Construction Engineering Limited, will see the firm maintain the gallery for next five years and construction, operation and maintenance, costing Rs 127 crore. The three-storey unit with a self-driving car track on its perimeter has a ground-floor cafeteria manned by robot servers and the food also prepared by robots. Also on the ground floor are interactive exhibits, where one can sit down for a picture which will then be 3-D printed or sketched, both being paid services. The ground floor courtyard sees some of the more pop culture robots of Transformer, Wall-E and the humanoid robot Asimo. 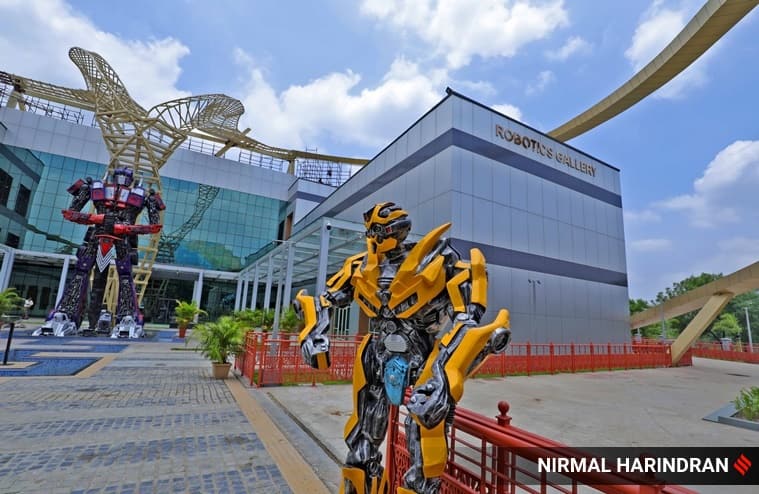 The complex takes the visitors through the history of evolution of robots — from the 16th century clockwork prayer mechanical monk to the present day humanoid robots and space robots. It also takes the visitors through how these machines have changed lives — in medical surgeries, in rescue operations and also includes an area to bring man versus machine to test where a visitor can duel in an air hockey game against a robotic opponent or see robots fight it out against each other, either in a soccer game or badminton. With exhibits from DRDO and ISRO which include unmanned aerial vehicles and satellites, as well as from engineering institute-made robots, which won at robo-fests, and a workshop, the idea is to encourage the youth with an interactive interface. A separate gallery includes virtual and augmented reality space where one can simply wear VR glasses to escape in a thrill ride, get into a ring fight or race cars. At the ‘Robo-Natya mandap’, one will see a performing troupe of robots – five dancers, a drummer, a trumpetist and a pianist.

The gallery will see 79 types of robots and a robotic workshop with an aim to “provide a platform for visitors to explore the ever-advancing field of robotics”.

The nature park, spread over eight hectares, has been designed and developed in collaboration with the forest department, according to a DST source. The aim is to acquaint visitors to flora as science also includes botany and biology and “in the future, we are also planning something more on chemistry,” added Nehra.