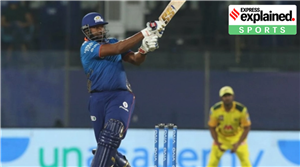 Pollard likes to stay beside the ball, at times outside the leg-stump, and try to swing it to the arc between long-off and long-on. Resultantly, he has had problems reaching out to legally-wide deliveries outside off. Chasing 219 for victory, Mumbai Indians seemed down for the count at 81/3 with almost 10 overs gone. Rohit Sharma, Quinton de Kock and Suryakumar Yadav had been dismissed with Chennai Super Kings spinners Ravindra Jadeja and Moeen Ali tightening the screws. The asking rate had reached well over 15 runs an over when Kieron Pollard decided to take matters into his own hands. His assault got the better of Captain Cool Mahendra Singh Dhoni as Mumbai scripted a memorable heist.

What was Chennai Super Kings’ plan for Pollard?

The timeout at the end of the 14th over was a frenetic affair in the Chennai camp. Skipper MS Dhoni, head coach Stephen Fleming, bowling consultant Eric Simons and bowling coach L Balaji – all were involved in intense chats with the bowlers. At that stage, Mumbai still needed 89 from 36 balls but Pollard had looted 36 runs in the last two overs to trigger concern in the Chennai camp. Talking heads bobbed around.

The question was: where to bowl to Keiron Pollard?

There had been only one expensive over from a seamer – Lungi Ngidi – by then with the South African bleeding 14 runs in the over just before the timeout. The other one was the 13th bowled by Ravindra Jadeja, which kickstarted Pollard’s mayhem. Interestingly, Jadeja had tried bowling well outside the off-stump twice and saw the ball being bashed over his head for two sixes. Ngidi had bowled at the stumps, a slower one and a length delivery, but both disappeared over the boundary.

The consensus after the discussion in the timeout seemed to be to bowl well outside the off-stump.

Has that line of attack worked before against Pollard?

Yes. Pollard likes to stay beside the ball, at times outside the leg-stump, and try to swing it to the arc between long-off and long-on. Resultantly, he has had problems reaching out to legally-wide deliveries outside off. He has either sliced them for catches or not managed to pile up the boundaries. Chennai used to deploy Dwayne Bravo for that line of attack against Pollard but he wasn’t in the playing XI for Saturday’s game. He would run on to the field to have a private chat with Dhoni during the mayhem, though.

So, did Chennai try it?

Yes. Immediately after that timeout, Shardul Thakur went for that line of attack. The execution, though, went awry. The first ball slipped out as a wide delivery. The second was close enough for Pollard to thump it to the straight boundary. The third was wide enough but overpitched and allowed Pollard to hold his balance and just free his arms at it for a boundary. So, Thakur went for the wide yorker next but it was too wide, and the umpire extended his arms again. The next ball was not far from the off-stump and Pollard edges the heave to the third man boundary. Thakur gave up that line and went for the short ball, and had to stare at the deep midwicket boundary where the ball ended up.

So, 23 runs had come off that over in which the well-outside-off strategy was attempted.

What happened next against Pollard?

In the 17th over, Sam Curran had two balls at him. One was a well-executed wide yorker that the batsman could only dig out for a single. The other was a ball on the legs which Pollard didn’t put away. That over went for just two runs and also saw the fall of Krunal Pandya. Now, Mumbai needed 48 from three overs.

Is there any other perceived weakness in Pollard?

Leg-spin and pacy bouncers have been considered Pollard’s weaknesses in the past, though he hasn’t necessarily fallen too many times to bouncers. Quality leg-spinners have troubled him, but Chennai didn’t possess one on the day.

What happened in the final over from Ngidi?

By this time, Chennai bowlers had abandoned the well-outside-off plan and Ngidi was gunning for yorkers. Two slipped out as full tosses and disappeared for a four and a six. The bowler nailed one good yorker – on the last ball when two runs were needed – but by then Dhoni perhaps didn’t have enough confidence in him to have the deep midwicket closer to cut off the second run. Pollard stabbed the yorker in that region to run two.

Also, non-striker Dhawal Kulkarni had left his crease early – it would have got Ravichandran Ashwin into the act were he the bowler – and completed the second without much fuss.