🔴 Why do oil consuming countries keep strategic petroleum reserves? Why have the United States, India and some other nations announced concerted action to release a part of these reserves? India’s move to release 5 million barrels of oil from its strategic reserves as part of a coordinated challenge led by the US against the OPEC+ producers’ cartel’s move to curb output, is the first time that New Delhi would be dipping into its reserves to leverage it as a geopolitical tool. The oil will be released “in parallel and in consultation with” the US, China, Japan and South Korea, the Oil Ministry said in a statement on Tuesday, without specifying a timeframe. The UK has announced that it will release 1.5 million barrels of crude; the US is set to release 50 million barrels.

Why are these countries releasing oil from strategic reserves?

It is part of a concerted effort to negate upward pressure on crude prices from OPEC+ — a 13-country grouping of oil exporters that has been joined since 2016 by 10 others led by Russia to decide production quotas — keeping supply below demand, even though the action is largely symbolic in nature. India has called for an increase in the supply by OPEC+ at multiple international forums and in bilateral talks with oil producing countries. India argues that high crude oil prices are impacting the post-Covid economic recovery, especially in the developing countries.

In a release, the White House said American consumers and businesses were feeling the impact of high prices “because oil supply has not kept up with demand as the global economy emerges from the pandemic”. 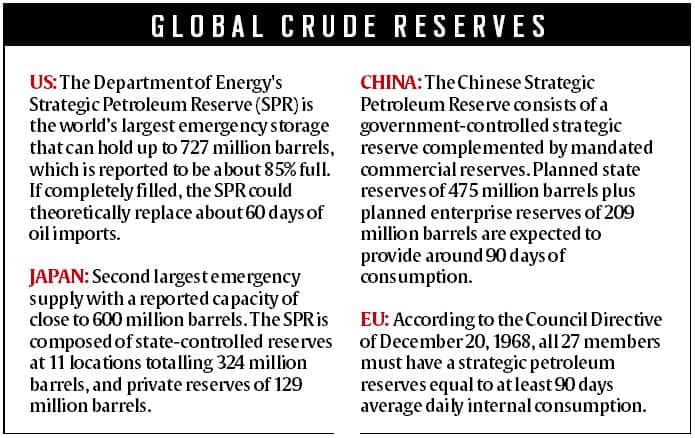 How will this affect crude oil prices?

Talk of a coordinated release of reserves by large oil consuming countries had already played a role in bringing down prices from a high of $86.4 in late October to under $80 per barrel on Monday. Brent, however, recovered to $82.3 per barrel on Wednesday with some analysts noting that the US had released less oil from its reserves than was expected. Analysts at Goldman Sachs said on Wednesday that the coordinated release led by the US may add about 70-80 million barrels of crude supply, less than the more-than-100 million barrels the market has been pricing in.

Government officials noted that the coordinated action would be a step in the direction of reducing international oil prices. “Global…prices have risen due to the efforts of Russia and Saudi Arabia. Now that the US has announced the release of oil from reserves, we are cooperating in this step to ensure that crude oil prices remain under control,” an official said. Saudi and Russia are the largest oil producers in the OPEC+ group, which has indicated it may revisit its plans to gradually increase production in the light of releases from strategic reserves.

OPEC+, which controls about half the world’s oil output, had cut production by 10 million barrels a day in April 2020 when prices fell below $20 per barrel as global demand collapsed due to lockdowns. The cartel has been accused of being slow to restore production levels despite a sharp increase in crude prices in 2021. Even after a scheduled increase in production of 400,000 barrels per day in December, the output of OPEC+ will still be lower than the reference levels of member countries by nearly 5.4 million barrels per day.

High global prices have contributed to consumers paying record high prices for petrol and diesel across the country. In Delhi, petrol is retailing at Rs 104.0 per litre, and diesel at Rs 86.7 per litre, up 27 per cent and 21 per cent respectively from a year ago. Consumers are facing prices that are significantly higher than those prior to 2021, despite a recent move by the Centre to cut excise duty on petrol by Rs 5 per litre, and on diesel by Rs 10 per litre.

The Centre had in 2020 increased central excise duties on petrol and diesel by Rs 13 and Rs 16 per litre respectively in an effort to shore up revenues as economic activity crashed due to the pandemic. Some states have also hiked VAT on fuels.

What are India’s strategic petroleum reserves, and why are they needed?

India’s strategic reserves are the effort of a broader plan to build an emergency stockpile with millions of barrels of crude oil, on the lines of the reserves that the US and its Western allies set up after the first oil crisis of 1973-74. Under the first stage of the Strategic Petroleum Reserve project, underground rock caverns with total storage of 5.33 MMT, or about 38 million barrels of crude oil, have been commissioned at three locations — Visakhapatnam (1.33 MMT), Mangalore (1.5 MMT), and Padur in Karnataka (2.5 MMT).

These facilities can provide for about 9.5 days of India’s crude oil requirements based on 2019-20 consumption levels. The combined storage facilities of Oil Marketing Companies (OMCs) in the country can hold enough crude oil to meet 64.5 days of requirement, bringing the total national capacity for storage of crude oil and petroleum products to 74 days, according to the Centre. India is in the process of expanding its strategic petroleum reserve storage by 6.5 MMT at two locations — Chandikhol in Odisha (4 MMT) and Padur (2.5 MMT).

The International Energy Agency (IEA) recommends that all countries hold crude oil stocks worth 90 days of imports. India imports about 85 per cent of its crude oil requirements. Crude oil from the reserves are to be released by an empowered committee constituted by the government, in the event of any supply disruptions from abroad. These include any natural calamity or unforeseen global event leading to an abnormal increase in prices.

A senior government official said that this would be the first instance of India using strategic reserves to influence international prices, adding that India had also drawn down its reserves somewhat earlier this year to supply refineries as crude oil prices were rising.