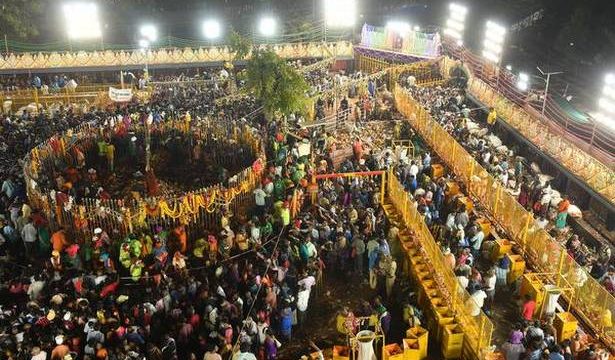 The story so far:

Medaram, a tiny village in Telangana’s tribal heartland of Mulugu district, is getting ready to host the Sammakka-Sarakka jatara, billed as the country’s biggest tribal fair, to commemorate a tribal revolt led by Sammakka and Saralamma, a mother-daughter duo, against levy of taxes on tribal people during drought conditions by the then Kakatiya rulers in the 12th century.

The mega four-day jatara, scheduled to begin on February 16 in Medaram, is perhaps the only tribal fair devoted to pay tribute to tribal warriors who made supreme sacrifices defending the rights of aboriginal tribal people. It takes place once in two years.

The jatara epitomises the courage displayed by the mother-daughter duo, along with other family members, in the struggle against a despotic regime bent on collecting taxes from the people of Medaram during turbulent times induced by severe drought. The sacred site in Medaram and its surrounding Jampanna vagu, named after tribal martyr Jampanna, son of Sammakka, comes alive with lakhs of devotees during the four-day jatara.

Why do tribals come to Medaram?

Tribals (and others) flock to Medaram during the jatara not just from Telangana and Andhra Pradesh but also from as far as Madhya Pradesh, Jharkhand, Chhattisgarh and Maharashtra.

Sammakka and Saralamma are revered by devotees as tribal goddesses, and devotees make offerings to propitiate them to bestow health and wealth. All the rituals at the jatara site are held in tune with tribal traditions under the aegis of tribal priests.

Legend has it that in the 12th century, a tribal chieftain Medaraju of ‘Polavasa’ region (undivided Karimnagar district in modern times) found a baby in a forest during a hunting spree. He named her Sammakka, brought her up and got her married to Pagidigidda Raju, a tribal leader of Medaram, who was a feudatory of Kakatiya rulers. Sammakka had three children Nagulamma, Saralamma (Sammakka) and Jampanna.

When the then Kakatiya king insisted on payment of taxes by people of Medaram despite drought, Pagidigidda Raju refused to obey his diktat. Enraged over this, the king announced a war on Medaram and deployed a large contingent of his army.

Undeterred by the military might of the Kakatiya reign, Sammakka and her husband joined the battle. Sammakka, unfazed by the death of her husband, daughter and son, continued the fight and suffered grievous injuries. She vanished into Chilakalagutta hillock nearby and the locals found a container of vermillion on the hillock. They believed Sammakka had turned into a goddess to protect them with her divinity.

The jatara symbolises the traditions and heritage of the Koya tribal people.

The question is – will COVID-19 allow the jatara to take place?

One of the striking features of the tribal fair is the offering of jaggery to the tribal goddess at the altars (bamboo poles). It encompasses common features of tribal fairs – die-hard devotees going into a trance, the sacrifice of fowls and goats, besides pulsating traditional drum beats accompanying folk songs.

The spurt in COVID-19 cases in different parts of Telangana, mainly in the erstwhile composite Warangal district, has become a cause of concern for the administration. A tough task awaits the Health and other departments to ensure strict implementation of the COVID-19 safety norms during the four-day jatara, when lakhs of devotees are expected to converge.