A team of archaeologists has discovered what may be the world's oldest known cave painting dating back to more than 45,000 years. Why is this significant? 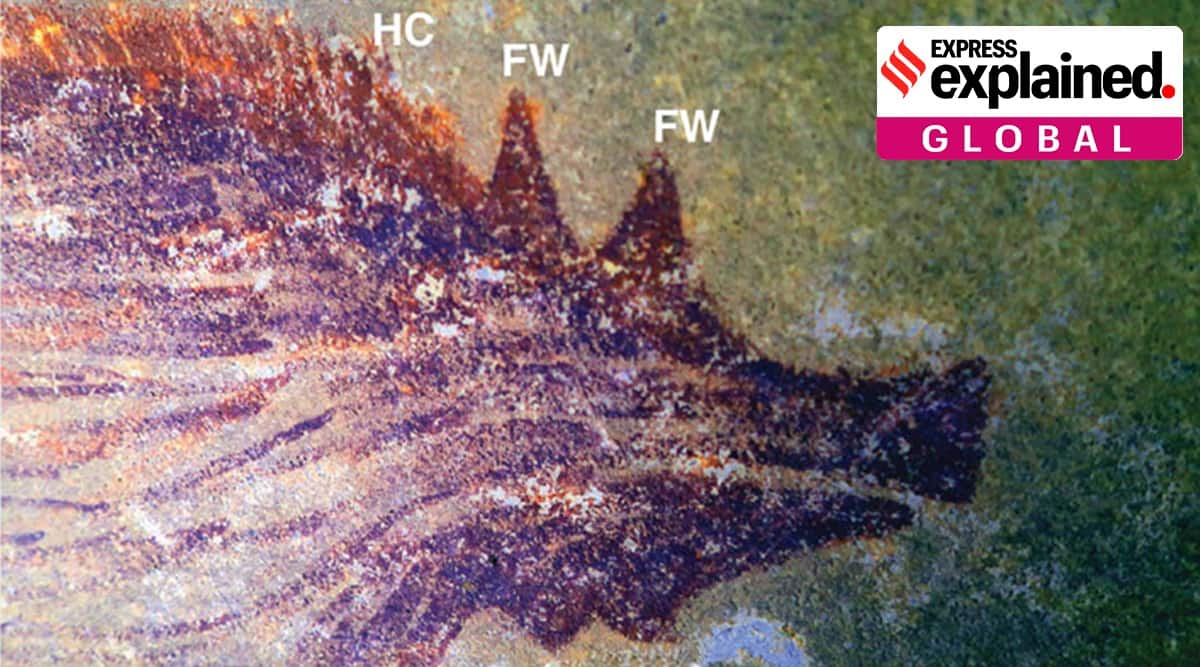 A team of archaeologists has discovered what may be the world’s oldest known cave painting dating back to more than 45,000 years. The cave painting depicts a wild boar endemic to the Sulawesi island of Indonesia, where the painting was found. The central Indonesian island, which occupies an area of over 174,000 sq. km, is situated between Asia and Australia and has a long history of human occupation, the archaeologists note in their findings that have been published in the journal Science Advances.

So what is the significance of the cave painting?

The archaeologists note that the dated painting of the Sulawesi warty pig seems to be the world’s oldest surviving representational image of an animal. The team came across this painting in the limestone cave of Leang Tedongnge while conducting field research.

The painting was made using red ochre pigment and depicts a pig with a short crest of upright hairs and a pair of horn-like facial warts in front of the eyes, who is likely observing a social interaction or fight between two other warty pigs. These pigs have been hunted by humans for tens of thousands of years and are the most commonly depicted animal in the ice age rock art of the island, which suggests that they have long been used as food and form a “focus of creative thinking and artistic expression” for people of that time, doctoral researcher Basran Burhan who discovered the cave art was quoted as saying in a press release.

The book, “The Archaeology of Sulawesi”, published by the Australian National University press in 2018 mentions that the Sulawesi island contains some of the oldest directly dated rock art in the world and also some of the oldest evidence for the presence of hominins beyond the southeastern limits of the Ice Age Asian continent.

Even so, it is not yet clear as to when modern humans first colonised Sulawesi. So far, the earliest dated proxy evidence for the presence of modern humans in Sulawesi consists of prehistoric rock art, researchers note.

In 2019, a cave wall depiction of a pig and buffalo hunt became the world’s oldest recorded story. This rock painting was also found in Sulawesi by the same team of archaeologists who claimed that it was at least 44,000 years old. Before this finding, rock art found in European sites dating back to 14,000-21,000 years was considered to be the oldest. These findings were published in the journal Nature and were ranked as one of the top-10 scientific breakthroughs of 2020 by Science magazine.

How did the archaeologists date it?

Maxime Aubert from the Griffith Centre for Social and Cultural Research, who is the co-author of the study and who sampled the art for the analysis, told AFP that the painting was first discovered by Burhan in 2017 as part of surveys the team was carrying out with the Indonesian authorities.

While dating rock art can be challenging, for this painting archaeologists used a method called U-series isotope analysis, which uses calcium carbonate deposits that form naturally on the cave wall surface to determine its age.

Aubert was quoted as saying in a Griffith University press release that for this painting, they used a calcium carbonate deposit, also referred to as a “cave popcorn”, that had formed on the rear foot of one of the pig figures. Aubert removed this deposit from the painting and when it was analysed, they were able to figure out a minimum age for the painting at around 45,500 years, which means the painting was made before this.