Britain said that a Brexit treaty on Northern Ireland, negotiated by Prime Minister Boris Johnson and called the Northern Ireland Protocol, could create so many problems that it might have to be abandoned if it cannot be rewritten. 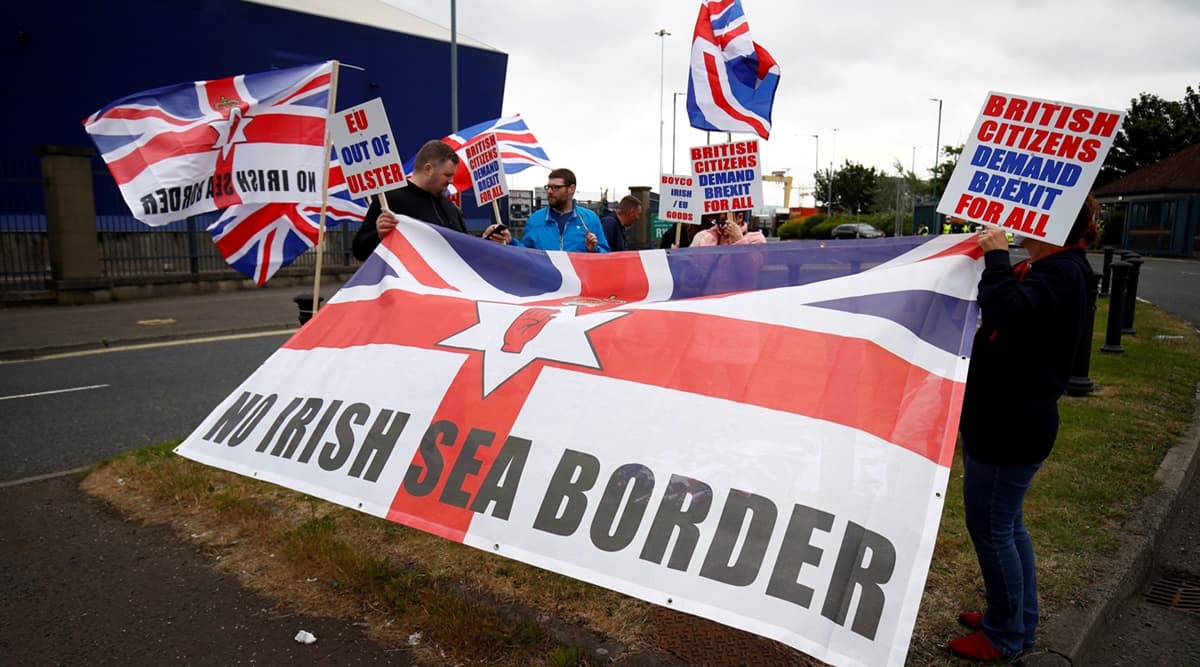 First came the shortages on supermarket shelves. Then the “sausage wars” over the supply of chilled meat. Now, the rift over post-Brexit trade rules for Northern Ireland is threatening to become a full-scale confrontation between Britain and the European Union — and one that could upset the United States, too.

On Wednesday, Britain said that a Brexit treaty on Northern Ireland, negotiated by Prime Minister Boris Johnson and called the Northern Ireland Protocol, could create so many problems that it might have to be abandoned if it cannot be rewritten. The European Commission, the EU’ s executive body, said it would seek creative solutions but would not renegotiate the deal.

For critics of Johnson, the latest statement is evidence of his lack of trustworthiness, his willingness to break international commitments and his denial of responsibility for the consequences of the withdrawal from Europe he championed. Johnson’s allies accuse the EU of inflexibility in applying rules, a pettifogging lack of sensitivity to feelings in parts of Northern Ireland and vengeful hostility toward Britain for exiting the bloc.

Behind all the bluster lie fears about the fragility of the Northern Ireland peace, and that raises the stakes beyond those of typical trade disputes. President Joe Biden, who talks often about his Irish heritage, has already warned Johnson not to do anything to undermine the Good Friday Agreement that helped to end the violence.

What is the Northern Ireland Protocol?

It’s fair to say that however spy thriller-like the name, this dry legal text won’t be found on most people’s summer beach lists.

This frontier is contested, and parts of it were fortified during the decades of violence known as The Troubles. But after a peace deal in the late 1990s, those visible signs of division have melted way along the open border. No one wants checkpoints back, but as part of his Brexit plan, Johnson insisted on leaving Europe’s customs union and its single market, which allows goods to flow freely across European borders without checks.

The protocol sets out a plan to deal with this unique situation. It does so by effectively leaving Northern Ireland half inside the European system, and half inside the British one. It sounds neat — logical, even — until you try to make it work. The plan means more checks on goods entering Northern Ireland from mainland Britain, effectively creating a border down the Irish Sea and dividing the UK Faced with all the new bureaucracy, some British companies have stopped supplying stores in Northern Ireland, saying they simply can’t handle the added paperwork now needed.

This has enraged some Conservative lawmakers and inflamed sentiment among those in Northern Ireland who want the region to remain part of the UK. The unionists, mostly Protestants, identify as British and believe the changes could threaten their future in the UK.

So, while not being able to get the right kind of sausages might seem like a small inconvenience, to many unionists, it feels as if their British identity is what’s in the fryer.

Why is the EU insisting on it?

The bloc has dug in its heels, partly because not only did Johnson sign on to the protocol, but he also negotiated it himself and pushed it through the British Parliament.

British critics accuse the Europeans of being overly rigorous and legalistic in their interpretation of the protocol, and of being overzealous in the checks required.

But EU leaders believe that the bloc’s existential interests are being put at risk. For Brussels, the single market is one of its cornerstones. If that is undermined, it could threaten the building blocks of European integration.

What about those sausages?

Under the protocol, foods with animal origins — yes, like sausage — coming from mainland Britain into Northern Ireland need health certification to ensure they meet European standards should they end up in Ireland, which, of course, is still part of the EU’s single market.

The British want a light-touch system — that is, one in which there are minimal checks — on goods that companies promise will stay in Northern Ireland.

But the EU wants Britain to sign up to Europe’s health certification rules to minimize the need for controls. So far, many of the regulations have been waived during a “grace period,” but that is scheduled to end later this year.

What would happen if Britain withdrew from the protocol?

Britain says it has grounds already to deploy an emergency clause known as Article 16 that permits it to act unilaterally, effectively allowing it to suspend parts of the protocol. It doesn’t plan to do so for the moment, but the option remains on the table.

If Britain does this, the European side will most likely accuse Johnson of breaking a treaty. This could lead to retaliation and even a trade war between Britain and the EU.

Is this all just a negotiation tactic?

During the endless Brexit talks, Johnson often played hardball with the Europeans, sometimes relying on a so-called madman strategy and threatening to quit the bloc without any deal at all.

So, this may just be another roll of the negotiating dice, and most analysts believe that, for the British, the best outcome would be winning concessions on the protocol from Brussels.

But isn’t it risky?

Yes, because ultimately Johnson has no real alternative to the protocol short of ripping it up and daring the Republic of Ireland to resurrect the Irish border. That could inflame sectarian tensions in Northern Ireland, provoke a trade war with Brussels and heighten tension with the Biden administration.

Leaving aside the impact on Northern Ireland, that wouldn’t be an ideal backdrop for the UN climate change conference that Johnson is to host in Glasgow, Scotland, later this year — a moment when he will need international allies.