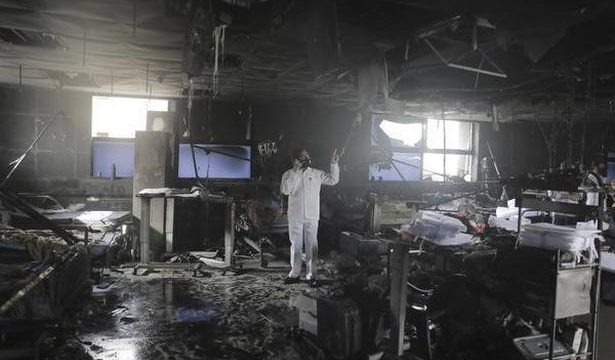 What does the National Building Code specify? Do State governments follow the Code?

The story so far: Fires occur in many public buildings in India every year, killing a large number of people and injuring many. Over the past year, there have been deadly fires in hospital buildings, including those treating COVID-19 patients. Recent infernos in hospitals at Bharuch in Gujarat, Virar, a suburb of Mumbai, and Mumbra near Thane, killed at least 37 people. The National Crime Records Bureau (NCRB) says 330 people died in commercial building fires in 2019, while fatalities for residential or dwelling buildings were much higher at 6,329. Electrical faults are cited as the leading cause of fires but State governments are widely criticised for being lax with building safety laws and for failing to equip public buildings with modern technology. Hospital ICUs (intensive care units) are a great fire risk because they are oxygen-suffused, and need to meet high standards.

What fire safety compliance is expected in public buildings, including hospitals?

At the centre of all standard-setting is the National Building Code of India. Part 4 of the Code deals with Fire and Life Safety. The document provides specifications and guidelines for design and materials that reduce the threat of destructive fires. Under the Code, all existing and new buildings are classified by nature of use, such as residential, educational, institutional, assembly (like cinemas and auditoria), business, mercantile, industrial, storage and hazardous.

Hospitals come under the institutional category. The Union Home Ministry’s Directorate-General for Fire Services, Civil Defence & Home Guards says on its website that the National Building Code (NBC), published by the Bureau of Indian Standards, is a “recommendatory document”, and States have been asked to incorporate it into their local building bylaws, making the recommendations a “mandatory requirement”. Evidently, fire safety rules exist in every State, but the provisions of the Code are ignored in practice, and even mandatory certifications do not reflect compliance.

Queries on hospital fires prompted the Centre to announce in Parliament on March 23 this year that a Fire Safety Committee conducts periodical audits on fire installation, heating, ventilation and air-conditioning, electrical sub-stations and other electrical equipment in the Union government’s hospitals. The Health Ministry said it had circulated strict guidelines in September 2020 stipulating third-party accreditation for fire safety and that a fire response plan should be in place.

What does the Code specify?

At the macro level, the NBC recommends the location of buildings by type of use in specific zones to ensure that industrial and hazardous structures do not coexist with residential, institutional, office and business buildings. It specifies, among other things, the technical requirements for special buildings, high rises, educational and institutional buildings higher than 9 metres, and those with an area of over 300 square metres.

Next, the Code drills down into the specifics of fire resistance based on the materials used — exterior walls, interior bearing walls, floor, roof, fire check doors, fire enclosure exits, and so on. Technologies to sound alerts in case of a fire and also to fight it are expected to be incorporated into buildings. Examples given in the Code are automatic fire detection and alarm system, down-comer pipelines connected to a roof tank, dry riser pipelines that fire-fighters can use to douse upper floors, automatic sprinklers and water sprays, fireman’s lift, fire barriers, escape routes, markings, and so on. Incorporating these into a proper design and ensuring that certified fire-resistant materials are used in the construction can avert deadly fires, giving occupants sufficient time to exit safely.

However, the NBC also says that for various types of buildings, “in case of practical difficulty or to avoid unnecessary hardship, without sacrificing reasonable safety, local head, fire services may consider exemptions from the Code”.

Maharashtra, which has been hit by a series of fires, has a Fire Prevention and Life Safety Measures Act since 2008. Section 3 of the Act makes the provisions of the NBC mandatory and Schedule I of the State’s law is borrowed from the Code.

However, reports in the wake of recent fire accidents indicate that the authorities have been unable to keep up with inspection requirements for thousands of buildings. A Comptroller and Auditor General (CAG) report for the period 2010 to 2015 noted that in Maharashtra, after a “joint physical inspection by audit of 53 government buildings/hospitals/educational institutions/commercial establishments in eight selected MCs [municipal corporations] revealed that only fire extinguishers were installed in 11 of 53 buildings and the remaining 42 buildings were not equipped with any of the fire-fighting installations”. Fire department professionals had earlier demanded third-party audits by licensed professionals.

In Kerala, obtaining an NOC [no-objection certificate] from the fire department, given in form H-3 for hospitals that are between 15 metres and 24 metres high, requires furnishing exhaustive information on design and infrastructure. The rules prescribe firefighting equipment and installations that meet “Indian Standards”, but do not contain a direct reference to the NBC.

Tamil Nadu’s form for a fire licence, required under the Fire Service Act read with municipal law, is even broader, and no reference is found for compliance with the Code.

What is the future course?

In December last year, the Supreme Court directed all States to carry out fire safety audits of dedicated COVID-19 hospitals. It has become evident that State forces lack the manpower to inspect and ensure compliance with safety codes, including the NBC, where it is mandatory. One option is to make heavy fire liability insurance compulsory for all public buildings, which would offer protection to occupants and visitors and bring about external inspection of safety.