There will be 50% fewer voters at polling stations, polling hours will be longer, and voters will have to wear masks and gloves. There are a series of restrictions on candidates and campaigning as well. The Election Commission of India on Friday (September 25) announced a series of extraordinary measures for the Bihar Assembly elections, which will be held in the midst of the global coronavirus pandemic. Chief Election Commissioner Sunil Arora said that this would likely be the biggest election exercise in the world in the middle of the Covid-19 pandemic, but the EC had taken all precautions and, “eventually life must go on”.

As of Friday, Bihar had a little over 13,000 active cases of novel coronavirus infection. A total 878 people have died of Covid-19 in the state.

So what steps has the EC taken to ensure that the elections do not result in an uncontrolled spread of the virus in Bihar?

Fewer voters per booth: Keeping in mind the need for physical distancing, the maximum number of voters per polling station had been reduced from 1,500 to 1,000, Arora said. This, he said, would push up the number of polling stations from the 65,337 that were set up during the previous elections in 2015, to over 1 lakh this time.

Special facilities for infected: Besides postal ballots, a special protocol has also been designed for active cases of the disease. Arora said that these voters would be allowed to vote in the last hour of polling day separately, under the guidance of local health officials.

Extended timings: To deal with an anticipated slower pace of proceedings, the timings for polling have been extended by an hour. While usually votes are cast between 7 am and 5 pm, polling will now continue until 6 pm at all booths except those categorised as affected by Left Wing Extremism (LWE).

Rules for election rallies: Arora sought to clarify that “physical campaigning” had not been barred. On restrictions, if any, on the numbers of people allowed at rallies, he said that the decision would lie with the district administration, and that district collectors had already drawn up lists of permitted rally venues. They had been asked to mark the ground to ensure “do gaz ki doori” among participants, Arora said.

Were these unusual steps unexpected?

Not at all. Most of these steps were part of the guidelines issued by the EC on August 22.

It had been announced then that patients and suspected cases would not be deprived of their democratic right to vote; however, they would be allowed to vote only in the “last hour of the poll day”. It was also announced that voters would have to mandatorily wear gloves before touching the electronic voting machine.

The caps on numbers in campaign groups and convoys, and on the number of voters at polling stations, were also announced.

The EC’s guidelines had said that temperature check of all voters at the polling station, and wearing of masks would be compulsory on voting day. “If temperature is above the set norms of MoHFW (Ministry of Health and Family Welfare) at first reading, then it will be checked twice and if it remains, then the elector shall be provided with token/certificate and will be asked to come for voting at the last hour of poll. At the last hour of poll, such electors shall be facilitated voting, strictly following Covid-19 related preventive measures,” the guidelines said.

How have political parties reacted to these curbs?

The EC sought feedback from political parties in August, and 15 parties responded. Four of these parties — LJP, NCP, National People’s Party (NPP) and AAP — sought postponement of the elections.

The RJD, which hopes to unseat Nitish Kumar as Chief Minister, had earlier questioned the need to hold elections during a pandemic — but it did not categorically asked the EC to postpone them. The Congress too, did not seek postponement in its feedback to the EC. On Friday, the RJD said that voting hours should have been extended by two hours instead of one hour.

The ruling JD(U) asked that the elections be held on a single day, as opposed to multiple phases. On Friday, the EC announced a three-phase vote — on October 28, November 3, and November 7 — with counting on November 10. 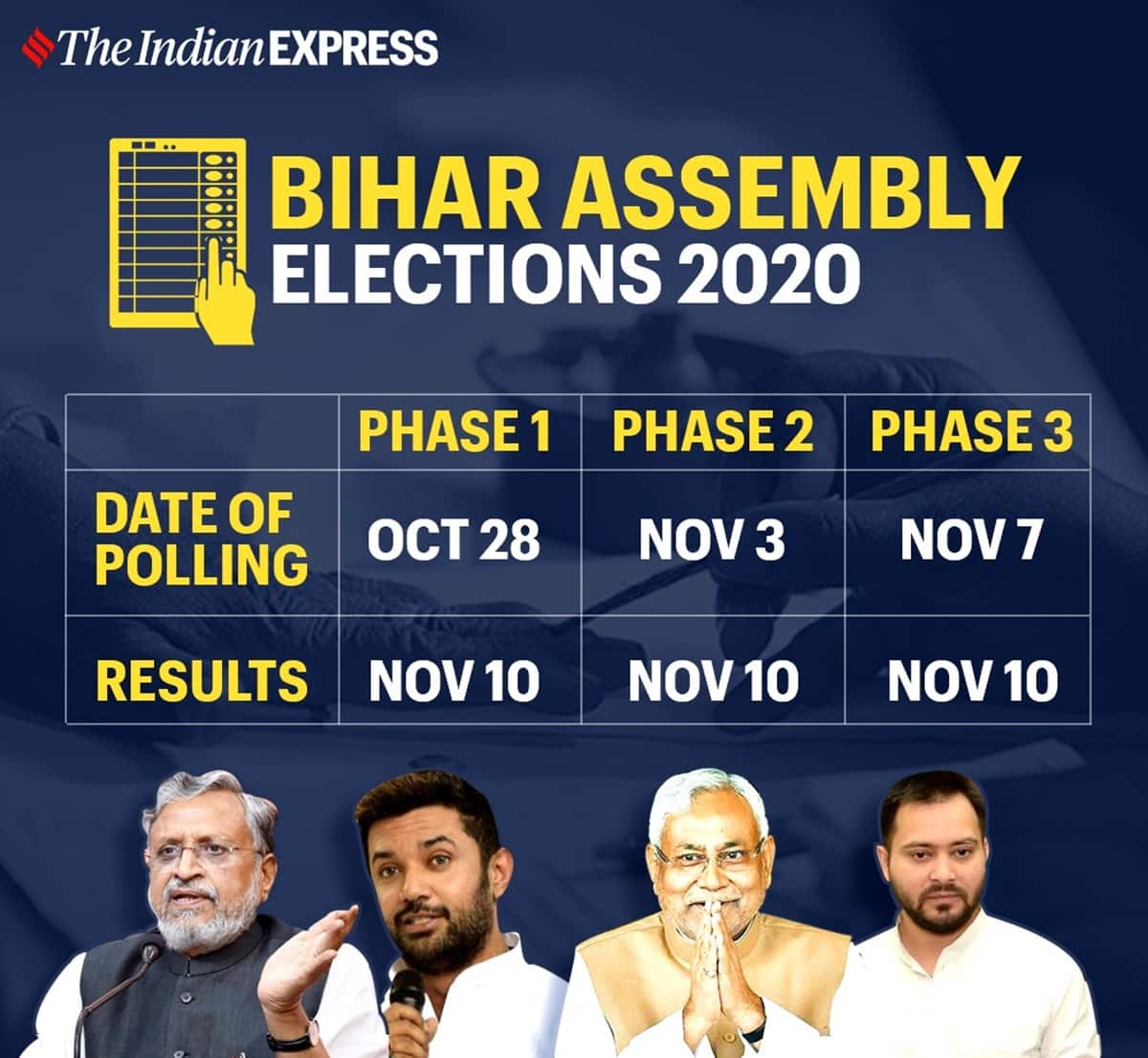 Several parties expressed misgivings about digital campaigning, on grounds mainly that virtual rallies and gatherings would disturb the level playing field, favour resource-rich parties that can arrange for shooting and broadcasting such events. Even the BJP agreed that a push of campaigning exclusively in the digital mode would be unreasonable given the digital divide in the country.

While both digital and physical campaigning will be allowed, Arora on Friday said that the EC would keep a close watch on attempts to misuse social media, and that anyone trying to “foment communal tension” would face the “law of the land”.