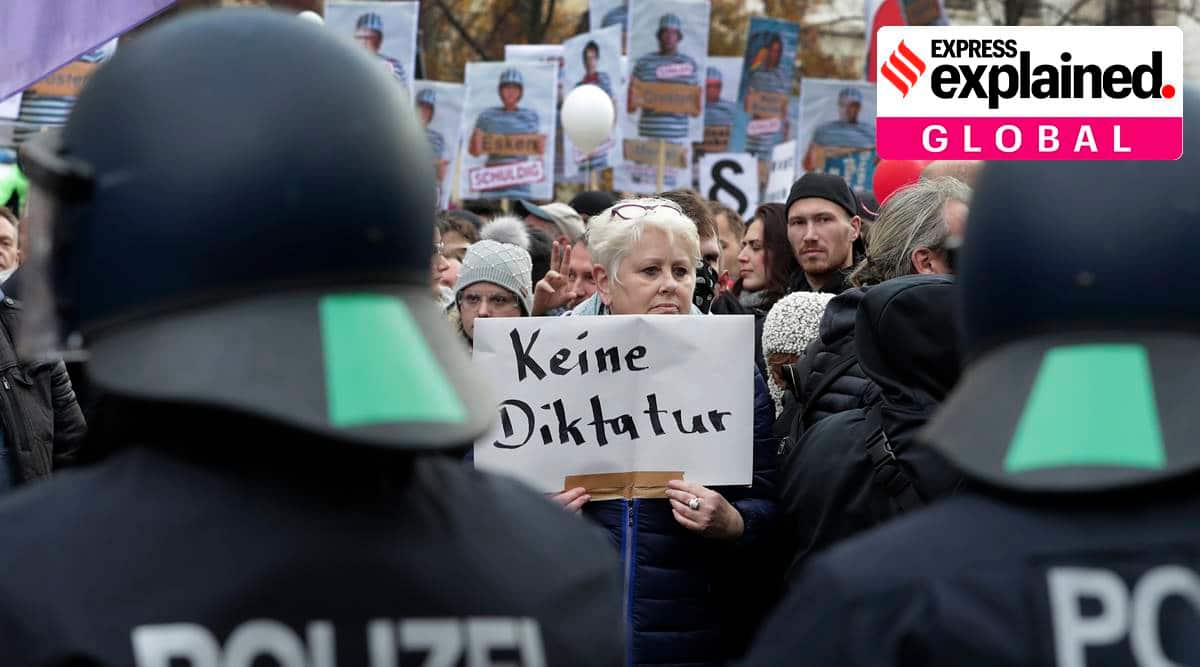 Thousands of protesters gathered in Berlin on November 18 to protest the country’s amended Infection Protection Law, which gives the government the legal basis to issue coronavirus restrictions, such as closing stores and other public venues and imposing rules about masks and social distancing.

While the amendment was swiftly approved by both houses of parliament, Right wing groups compared it to the Enabling Act of 1933, a law that had solidified Adolf Hitler’s dictatorship over the country.

According to a DW report, the amendment transfers some lawmaking power from the country’s legislature to the executive, thus strengthening the ability of the government to pass coronavirus restrictions by decree.

However, the law specifically lists the restrictions that state governments can enforce, and stipulates that protective measures will be triggered when a threshold of 50 new infections in 7 days per 1 lakh people is crossed. Anti-corona ordinances have been restricted to four weeks, and will require a justification from the government.

At the same time, the law separates “culture” from entertainment, meaning that restrictions on cultural venues would require justification from federal and state governments.

The German government hopes that the law’s passing would shield its pandemic measures from challenges in courts, as per the German Press Agency (DPA).

In the past few months, Berlin has seen repeated protests against the country’s coronavirus restrictions. While the government has generally received praise for its handling of the pandemic, resistance to its policies has also grown during the period.

Trying to take advantage of this sentiment, Right wing groups, including the ultra-right Alternative for Germany (AfD) party, have compared the new law to the Enabling Act of 1933, a Nazi-era law that cemented Adolf Hitler’s leadership over the country.

In the parliamentary elections of March 5, 1933, Hitler’s far-right Nazi party failed to secure an absolute majority, despite its many attempts to intimidate opponents during the election. Following this, on March 23, Hitler asked the German parliament to approve what was called the “Enabling Act”, or the “Law to Remedy the Distress of People and the Reich”.

Except for the Social Democrats, who valiantly opposed the measure in the face of Nazi intimidation tactics, all other parties present that day chose to approve the law, which was passed with the required two-thirds majority. The German Communist Party, which was also opposed to the law, was not present in parliament when the vote was passed, as all of its members by that time had either been stripped of authority, arrested or had fled to avoid arrest.

The law drastically increased Hitler’s power, by allowing his government to make laws or sign agreements with other countries without legislative approval — making the German parliament redundant.

Constitutional liberties were suspended, and all political parties except the Nazis were either banned or forced to disband, making the March election the last multi-party election. The next election, in November 1933, had only the Nazi party on the ballot. Multi-party democracy only resumed after Germany’s defeat in World War II.

Reactions to the comparison

Mainstream politicians have dismissed the amendment’s comparison to the Nazi law. German foreign minister Heiko Maas tweeted, “To “help out with facts”: The Nazis undermined democracy with the Enabling Act. We’re doing the contrary today with the German Infection Protection Act. Arbitrariness is excluded, legal clarity is created.”

“Of course, everyone has the right to criticize the measures. Our democracy lives from the exchange of different opinions. However, anyone who downplays or relativises the Holocaust has learned nothing from our history,” Maas said.