The 2020 Rockefeller Center Christmas Tree is a 75 feet tall Norway Spruce, 45 feet wide, and weighing 11 tonnes. Roughly 75 to 80 years old, it made a 200-mile trip into the metropolis from upstate Oneonta in New York. 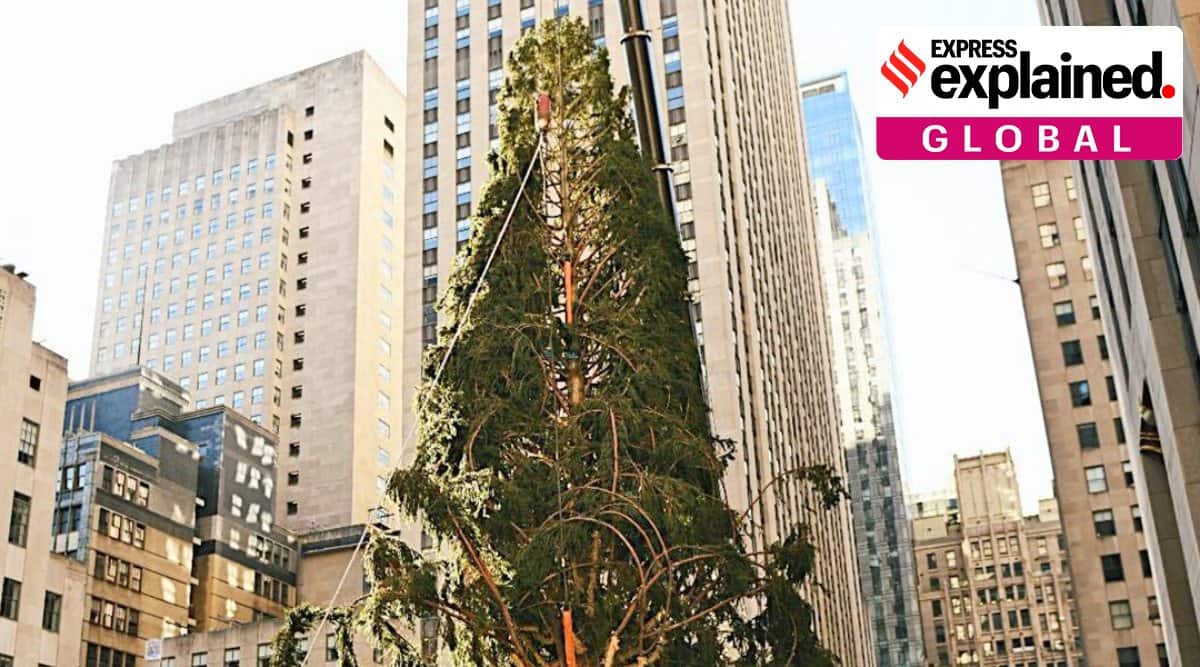 The Rockefeller Centre Christmas Tree, arguably “the most famous Christmas tree in the world”, made news this past week when netizens were amused by its disheveled look, calling it a “metaphor for 2020”. The tree is an enduring memory for many around the world, thanks to the crucial role it played in the 1992 film Home Alone 2: Lost in New York.

A look at what makes the tree special, how it is selected and history of the tradition.

What is special about the tree?

A Norway spruce tree sourced from upstate New York rings in Christmas celebrations in New York City every year. Placed annually at the Rockefeller Center Midtown Manhattan, it is erected in mid November and lit in a public ceremony on the Wednesday following Thanksgiving. This year it will be lit up on December 2. Since 1997, the lighting has been broadcast live on NBC’s Christmas in Rockefeller Center telecast, and is lit by the Mayor of New York City. An estimated 125 million people visit the attraction each year.

However, the public won’t have access to the tree lighting ceremony this year due to the pandemic and are invited to view the live national broadcast. Further details about how to visit the tree will be announced in the coming weeks.

The 2020 Rockefeller Center Christmas Tree is a 75 feet tall Norway Spruce, 45 feet wide, and weighing 11 tonnes. Roughly 75 to 80 years old, it made a 200-mile trip into the metropolis from upstate Oneonta in New York. It will be decorated with more than 50,000 multi-coloured LED lights on approximately 5 miles (8 km) of wire. On top of it would be the three dimensional Swarovski star, weighing approximately 900 pounds (408.23 kg) and featuring 70 spikes covered in 3 million crystals, designed by architect Daniel Libeskind in 2018. After the holidays, the tree will be made into lumber and donated to Habitat for Humanity to build a home. 📣 Express Explained is now on Telegram

Why is everyone talking about this year’s tree?

When the tree was being erected on November 14, its photos started getting widely shared on social media as its disheveled look caught the eye of the people. Commenters started pointing out it’s unusually scraggly state, and considered it to be emblematic of the year overall, ravaged by the pandemic. On Twitter, users wrote that the tree looked like it “had cut its own hair” and had “just like the rest of us, (had really been through things).” Another said it was “a metaphor for 2020.” People said they could relate to its disheveled state, as it resembled their lives.

What also went viral was the news of a tiny owl found dehydrated and hungry in the branches of the Christmas tree. The adult male Saw-whet owl was dubbed Rockefeller, and was nursed back to good health at the Ravensbeard Wildlife Center in the Hudson Valley, before being released in the wild.

The tree looked exactly like its predecessors when they were being installed, EB Kelly, a managing director at Tishman Speyer, the real estate firm that owns Rockefeller Center, told American media outlets. She said that since the workers had wrapped the tree wrapped tightly before the long drive, it would take the branches time to settle back into their usual position after it is placed upright.

Who selects the tree?

This crucial task is the responsibility of the Rockefeller Center head gardener Erik Pauze. He scours the region and visits a number of nurseries, apart from going through the submissions made by homeowners. Pauze keeps an eye on potential candidates throughout the year, keeping a tab on how the trees fare during the change of seasons. He makes the final decision in September, and the winning tree, which is a donation by its owners is transported to New York City.

Origins of the tradition

It started in 1931 when the workers at the Rockefeller Center construction site pulled in money to erect a 20-foot Christmas tree to express gratitude for the jobs they have during the Great Depression. They decorated it with handmade garlands, streamers and ornaments made from tin cans. Two years later, Rockefeller put up a 50-foot tree and decorated it with 700 twinkling lights. It was then the first official tree-lighting ceremony was organised. In 1951, NBC televised the first tree lighting on The Kate Smith Show, hosted by the “first lady of radio”, and since then, the tree lighting features a number of celebrities, musicians and hosts.

Ice skating under the Christmas Tree on The Rink at Rockefeller Center is one of New York’s quintessential winter activities and a tradition. The Rink was supposedly inspired by a Depression-era skate salesman who demonstrated his product by skating on the frozen water of the Rockefeller Center fountain. The idea of The Rink worked out for the sunken plaza as it was struggling to attract shoppers as the entrance to the high-end retailers was in the underground concourse. The Rink, or the “skating pond” as it was first known, officially opened on Christmas Day 1936. Originally planned as a temporary exhibit, The Rink got so popular it became a permanent addition.