The Indian economy witnessed a whole host of significant news events last week and it has a packed schedule this week as well. 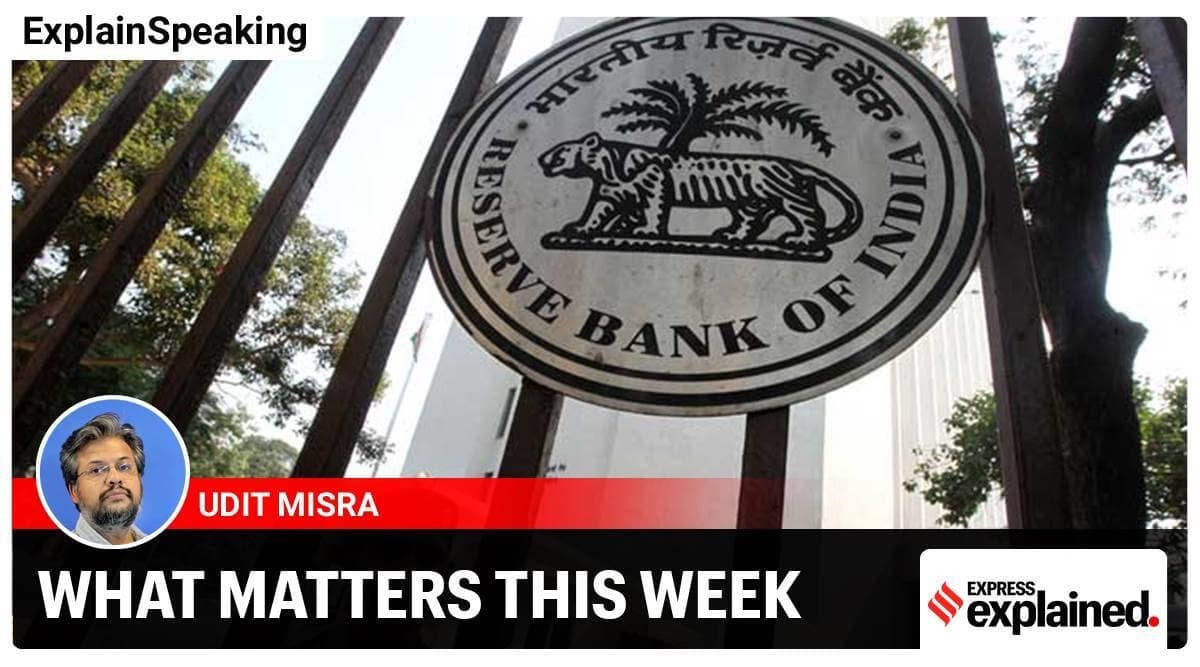 – ExplainSpeaking-Economy is a weekly newsletter by Udit Misra, delivered in your inbox every Monday morning. Click here to subscribe

The Indian economy witnessed a whole host of significant news events last week and it has a packed schedule this week as well.

At long last, the government was able to find a buyer for Air India, the debt-ridden and loss-making national carrier. The deal has several implications not just for the government and the winning bidder — Tata Sons — but also for the broader economy.

Another slightly relieving news was that rating agency Moody’s changed India’s sovereign rating “outlook” from “negative” to “stable”. Readers should note that Moody’s hasn’t changed India’s ratings as a bond issuer; that continues to be the lowest investment grade (Baa3). But the “outlook” has improved. Of the three big rating agencies — Standard & Poor’s, Moody’s and Fitch, all of which place India in the lowest investment grade — only Fitch still retains a negative outlook.

The “outlook”, on the other hand, essentially refers to the chances of a country’s rating getting worse or better. A negative outlook last year meant that India’s rating was expected to worsen further. A “stable” outlook, thus, is an improvement and suggests that the Indian government’s finances are improving. This improvement is also seen to reflect the improving condition of the underlying economy.

However, for its part, Fitch Ratings cut India’s economic growth forecast to 8.7 per cent for the current fiscal while maintaining the negative outlook on India’s bond issuance. There was some good news from Fitch as well as it raised India’s GDP growth projection for FY23, that is, next financial year, to 10 per cent.

Lastly, there was the RBI monetary policy, which turned out to be along largely expected lines. Most analysts guessed the RBI would maintain the status quo on the repo rate — that is, the interest rate the RBI charges commercial banks when it lends them money. In times of weak economic activity, as is the case right now, RBI keeps the repo rate low to incentivise credit creation — or giving out fresh loans — by the banks.

The only trouble has been that these are also the times when inflation has been quite high. High inflation typically makes the RBI do the opposite — raise repo rates to cool down economic activity. But as ExplainSpeaking has written on numerous occasions in the past year, RBI has been prioritising boosting GDP growth while allowing prices to remain pretty high.

The reason has been straightforward: RBI is still concerned about India’s growth recovery. The RBI Governor spoke in metaphors but his meaning was clear to all when he said that the RBI “did not want to rock the boat” when it is nearing the shore and that, in fact, there was a journey beyond reaching the shores too. In simpler terms, RBI does not want to raise interest rates or reduce “liquidity” (or, the money available in the banking system for extending fresh loans) too soon or too abruptly lest it hurts India’s nascent economic recovery.

This choice by India’s central bank lies at the heart of a global debate that is arguably the reason why the so-called Nobel Prize for Economics — which is slated to be announced later today — came into existence.

But first the global debate on the growth-inflation trade-off.

On October 12, the International Monetary Fund will release its latest World Economic Outlook. The IMF release this report twice every year — in April and October — as well as regular “updates” on these outlooks. Read this piece to understand what the IMF said exactly a year ago in its October 2020 Outlook and this one to understand how things stood in the July update this year.

A key concern this time will be the rise in inflation across several countries. “Since the beginning of 2021, headline consumer price index (CPI) inflation has increased in advanced and emerging market economies, driven by firming demand, input shortages, and rapidly rising commodity prices,” states the IMF’s latest WEO. “Prolonged supply disruptions, commodity and housing price shocks, longer-term expenditure commitments, and a de-anchoring of inflation expectations could lead to significantly higher inflation than predicted in the baseline. Clear communication, combined with appropriate monetary and fiscal policies tailored to country-specific contexts, however, could prevent ‘inflation scares’ from unhinging inflation expectations,” states IMF in one of the main chapters in this year’s WEO.

Now to the most intriguing bit: What is the link between a central bank’s inflation concerns and the origins of the Sveriges Riksbank’s Prize in Economic Sciences, which is incorrectly called the Nobel Prize in Economics.

The first thing to know about this award is that Sveriges Riksbank is Sweden’s central bank and it is Riksbank’s money — all 10 million Swedish kronor or Rs 8.6 crore all it — that is given away.

In their fascinating book, “The Nobel Factor: The Prize in Economics, Social Democracy, and the market turn,” Avner Offer and Gabriel Soderberg detail the story of the birth of Economics Nobel.

The Swedish central bank started the prize in 1968 in a bid to undermine the dominant political economy narrative of a Social Democracy. In the post World War scene, Sweden had seen the rise of Social Democracy — a political ideology that believes in imposing heavy taxation to fund an extensive welfare state. But one of the key requirements of achieving the goals of social democracy such as fuller employment, widespread and affordable housing etc. was to have low interest rates in the economy. Low interest rates were needed to bring down the cost of borrowing by the government. That, in turn, required stripping Sweden’s central bank of its independence. The book details the fierce battle between Swedish Prime Minister Tage Erlander and Per Åsbrink, who was chosen by the PM to become the head of Sveriges Riksbank. Even though Åsbrink belonged to the ruling party, once he joined the central bank, his views started changing fast and he started seeing the ills of the government policies that kept interest rates artificially low.

Things came to a head in early 1957 — two years after Åsbrink was appointed. “In January and February 1957, the Social Democratic government struggled to finance its housing programme in the face of credit rationing by commercial banks. A higher interest rate would have pacified the banks, but housing would cost more. In the stand-off, the bankers seemed to be getting the upper hand. A credit squeeze could split the governing coalition and divide the Social Democratic Party. The prime minister was determined to fight. Åsbrink gave way and purchased the government’s housing loan. But on 10 July 1957, he sprang a ‘coup.’ Without consulting ministers, he persuaded the Riksbank board to curtail government borrowing and to raise the discount rate by one per cent. This kicked off an acute political crisis. It was badly timed: the coalition with the Agrarian Party was fragile, and that party’s delegate on the Riksbank board had opposed the hike.”

Not surprisingly “the prime minister was livid at Åsbrink’s ‘stupidity’; the government had ‘suffered a very serious loss of prestige,’” the authors write.

“Åsbrink’s coup topped the headlines for several days, and delighted the opposition. The coalition partner (the Agrarian Party) feared it would hurt its constituents. Opposition newspapers wrote that government had itself to blame for creating a ‘sick economy’ that needed this medicine. The socialist dream of low interest rates had gone up in smoke. Another wrote that Åsbrink had ‘proven his mettle’ and had shown ‘that the central bank is not some annexe’ to the Ministry of Finance,” the authors recount.

Anyway, while dismissing Åsbrink was dangerous, the ruling political establishment did manage to humiliate Åsbrink. By 1958, the PM had wrest back control. “For several years afterwards, interest rates did not rise, and never again would this governor step out of line. Further retribution followed. The central bank derived its income from seigniorage, the interest on the bonds that it purchased from the government with the money it created. Higher interest rates meant that the bank’s profits from government borrowing were paid for by Swedish taxpayers. The bank handed over a small amount to the Treasury every year, and kept the rest in a special account, which built up into a large stock of capital. The one per cent coup had produced an infusion of revenue, but the Treasury moved quickly to cut it off, by raising its share of the take fivefold.”

Starting the Sveriges Riksbank’s Prize in Economic Sciences was Åsbrink’s way, according to the authors, to get back at the dominance of the Social Democrats while pretending to be the patron of sciences. The authors argue that the Nobel Prize for Economics was used to push out “left” economists and promote those who believed in the market.

The point being, regardless of whether one agrees with the authors’ analysis or not, it is clear that a central bank’s independence, as well as its choices, are often deeply political in nature.

Who do you think might win the Economics Nobel this year? Write to me at [email protected]