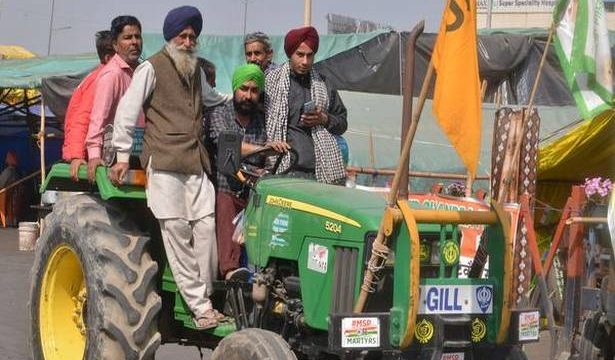 The national Convenor of AAP said the BJP had left the Colonial government behind in tormenting the farmers.

Describing the contentious farm laws as “death warrants” for farmers, Delhi Chief Minister Arvind Kejriwal made Aam Admi Party’s political ambition to cross over Yamuna into Uttar Pradesh clear at a kisan panchayat in Meerut on Sunday. Promising to control erring sugar mills in Uttar Pradesh on the lines of power distribution companies in Delhi, Mr Kejriwal asked the gathering to vote for a party with the right intent.

He said farmers were in pain for 70 years because they have been cheated by different governments and parties. Now the three farm laws have made it a matter of life and death. “All that the farmer has been asking for is the right price of his produce,” he said. Party manifestoes, he said, promise the right price of their crops but when these parties come to power, they forget about their commitment.

Mr Kejriwal said farmers were sitting on the road in the cold because “these laws would reduce them to labourers on their own land. It has come down to a do or die kind of situation,” he said.

He reminded the massive gathering of party workers and farmers that in 2014, BJP asked for votes by promising to implement the Swaminathan Committee Report. “However, within three years in power, it submitted an affidavit in the Supreme Court that said minimum support price could not be 50% more than the cost of the produce. It amounts to backstabbing the farmers.”

The national Convenor of AAP said the BJP had left the Colonial government behind in tormenting the farmers. He charged the BJP government for planning the Red Fort incident. “As the Chief Minister, I have been told that farmers were deliberately guided towards the Red Fort. Our farmers can’t be anti-national.”

Mr Kejriwal said the Central government wanted to turn nine stadia in Delhi into jails to lodge farmers but he refused. “During the Anna Movement, I have spent time in such jails.” He said his government and party has been supporting the farmers in the protest. “On January 28, when Rakesh Tikait had tears in his eyes, I called him and said I am with you.”

Responding to the PM’s promise that MSP will remain, Mr Kejriwal said he wanted to see a mandi in Uttar Pradesh where the crop is being bought at MSP. “Their ministers say that guaranteeing MSP would cost 17 lakh crores to the exchequer. I say without spending a single extra penny, the government could 23 crops at the MSP. In return, the government would get the crops that sell in the market. It would lead to profit or loss but in the long run it will even out. And, even if the government incurs a loss, it should not mind it as it is for the welfare of farmers. Haven’t they waived off debts worth 8 lakhs crores of their corporate friends,” he asked.

Mr Kejriwal said if farmers of UP voted for the party with the “right intent”, they would get the price of their sugarcane crop in their accounts the moment they deposited in the sugar mills.